With a new sport comes a whole new raft of terminology to pick up. Dave thought it'd be nice to get everyone familiar with the formations (i.e. the way players are set up in the field) commonly used in MLS, the notation we use to describe them, and the strengths and weaknesses of each. So, let's get started. 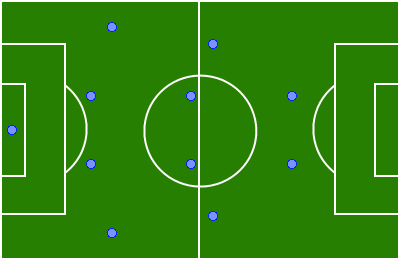 This configuration is generally considered the base of modern soccer formations. It's very straightforward, with two strikers playing more or less alongside one another, a band of four midfielders, and a band of four defenders. The players along the sideline are expected to advance further up the field than their colleagues in the centre in case of attack. The central midfielders have to work in both attack and defence, meaning that in order to hold the link together, the 4-4-2 requires dynamic 'box-to-box' central midfielders. A common variation is 4-4-1-1, with one striker playing slightly in front of the other rather than side by side. 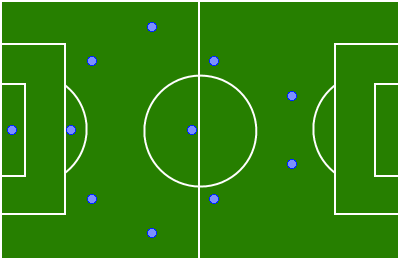 This is the 4-4-2's counter-formation. In response to the two central forwards, 3-5-2 withdraws another central player to create a central back three that outnumber the forwards. Meanwhile, the outside defenders are moved up to become part of the midfield. This means that a 4-4-2 is outnumbered in two key areas of the pitch. 3-5-2 is losing popularity as there is a simple way of removing this advantage: withdraw a central striker into midfield. 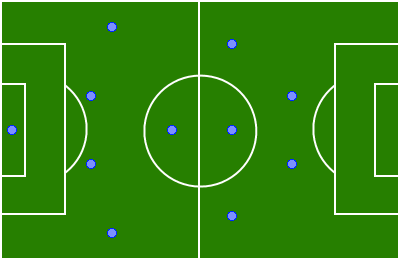 This is a very attack-minded formation that modifies the midfield band of the 4-4-2. One central midfielder and the two outside players are pushed up while the remaining midfielder is drawn back to cover the defence. When a team playing the 4-1-3-2 are in the opponent's half, they can overload the defenders and batter their way to the goal. The weak link in this formation is the withdrawn midfielder, who must be able to not only win the ball but distribute it to the forward players. Without good distribution from the defensive midfielder, the supply lines start to dry up and attacks don't get off the ground. 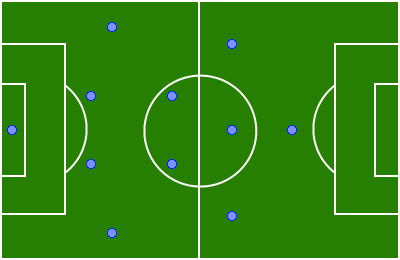 This formation is much more balanced than the 4-1-3-2, trading away punch up front for defensive stability and ease of supply to the forward players. By removing a striker and adding a second defensive midfielder, the requirement to be a ball-winner and a distributor is spread between two players. This makes for quick turnarounds in play, with the more defensive midfielder stopping opposition attacks and quickly giving the ball to the distributor, who can pick out clever upfield passes to release the forward players. The band of three advanced midfielders can provide quick support if the lone striker becomes overwhelmed. 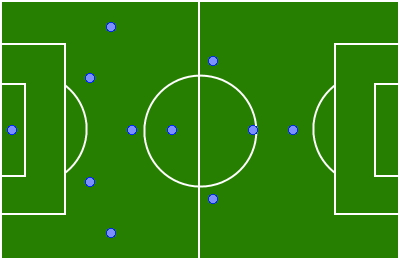 You can get to "Sigi's Arrow" from many starting points, and probably call it by many different things, but to me it is a 4-1-4-1, with the midfield band of four arranged in a diamond (hence <4>). This formation is dangerous when pushing down the centre, and fairly strong in defence due to the presence of the holding midfielder and the promise of quick help from the base of the midfield diamond. The main weakness is that there's not a good way to link up the wings without pushing the fullbacks up the field, meaning that the playing shape as a whole is too narrow if they're neutralised.