Share All sharing options for: Under the Klieg lights: Zach Scott v Union (Updated with Photo)

First a quick word on what a Klieg light is. They are an intensely bright carbon arc light that can make night into day and have were used in theater and film for just over a century. Their bright glare is also a bit reminiscent of the lights used in interrogation. Back in my KJR days, Locke and I started a regular series of shows called "Under the Klieg Lights." We used this phrase to denote that we would be focusing intently on a single issue. Sometimes these would be issues without a broad appeal, but we would give them attention that they usually did not receive. One such was on the "Coaching Tree" in NCAA basketball. We talked to some up-and-comers about their path to coaching, the one I remember best was Mike Brey. The next year he took over at Notre Dame. That's a lot of background for a unique name, but hopefully it makes sense over time. What we will be doing is focusing intently on one player, or one match-up after each game. It will be specific, not tactical.

When the Union played Seattle and Seb Le Toux took the pitch as a Forward I had originally thought that he would be marked by Hurtado, or through a zone system. And while there was an early hard tackle inside the 18, Le Toux instead turned into a long ball recipient along his left touch.

Recipient might be the wrong word. He was the target of the "50/50" ball. He almost never won it. Sitting in the 214 gave me a great view of the action between one Zach Scott and Seb Le Toux. It wasn't a pretty site. Scott didn't manage to just get into Le Toux's head, he used him like a jungle jim.

Sure, there's always a bit of climbing in those situations, but it became regular. It became routine. There were some elbows and knees involved. There were times when Scott's chin nearly touched Le Toux's, and yet Scott was still behind Le Toux.

Salazaar received as many glares from the Union Frenchman as he did from the Rave Green Freddyain. Scott could have wound up with probably 4 or 5 fouls called against, at an angle that would have been a great scoring opportunity. Instead he wasgiven ZERO.

Yes, Scott struggled early to get into the flow on offense, but one thing that he was never going to do was lose the aerial battle to his former teammate. I guess when a player goes from CB to RB he takes that ball winning attitude with him, and when he's facing a former 'mate at the same time he has extra incentive.

Scott's aggression prevented the Union from any counter down their left. His tenacity meant that though the Union did a fine job in the center third, they weren't going to challenge in the attacking third along that side. He did all of this while treading that line between foul and aggressive play.

Scott faced the glare of the Opening Day start, and shined. 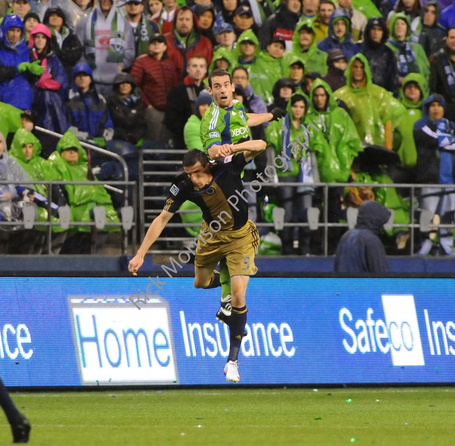 Thanks to Rick Morrison and www.ProstAmerika.com