The State of Freddie Ljungberg's Butt

Share All sharing options for: The State of Freddie Ljungberg's Butt 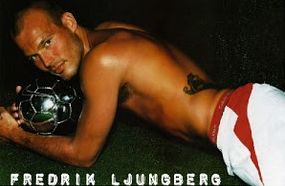 If you think I could pass up the opportunity to write about Freddie Ljungberg's posterior, you really don't know me very well, do you?

What's that you say? You're telling me that technically it's his "lower back?"

I'll bet you're also the type of person who's going to spend the entire weekend searching for three-year-olds to tell about the Easter Bunny, aren't you?

In case you missed it, though, here's the tale in a nutshell: The Union's Toni Stahl took down Freddie Ljungberg from behind on Thursday and saw yellow. Then he took down Fredy Montero the same way and saw red. And then Philly coach Peter Nowak proved his status as an MLS neophyte and complete ass by going all whiny and calling Freddie a diver.

And every Seattle fan immediately and simultaneously went ballistic over what an idiot newbie Nowak is. Because A) Freddie had to go to the hospital due to the injury, and B) as everybody who knows anything about MLS knows, Freddie does NOT dive. Ever.

As it was, is, and shall be, world without end, amen.

In case there are any neutrals reading this who are undecided about Nowak's accusations, here's what I'm asking you to do. Go to this Youtube video (because ESPN is too selfish to allow embedding) and watch the foul at about the 45-second mark and tell me that's a dive.

Can't do it, can you? Because first off, if you can manage to stop the video at precisely the 46-second mark, you'll see Toni Stahl's knee coming up to strike Freddie's tailbone. And second, anyone with knowledge of the workings of the universe will tell you that Freddie's body was acted on by an outside force. And I personally know this because I took physics. And got an 89.95% in the class, which Dr. Hsu insisted was still a B, and then the bookstore wouldn't buy my book back, so I took it and burned it in my balcony hibachi and it was highly satisfying. Except maybe less so for my downstairs neighbors.

And to the good people at CSU, I still feel very, very bad about your hedges.

Going back, though, to Freddie's...lower back, the end result of all of this is that due to Toni Stahl's handiwork (or...um...knee-iwork), Freddie Ljungberg is iffy for Sunday's game against the Red Bulls. (Joshua over at the Seattle Times has all the gory details, which include icky words like "fluid in the spine.")

Must say, though, that after reading this interview, I'm liking Freddie all the more. This answer especially:

"If you comment about these things, you always get some people who say you are moaning and this and that. I have done everything I can. I have put on six to eight pounds this season to try to, maybe what I think should be a foul when I've been pushed around last season, I didn't get fouled. I put on some muscles and hopefully that will help me. It's quite a delicate thing to talk about but I personally have the view that it is supposed to be a technical game. If you're not quick enough and you have to foul, that should be reprimanded."

Amen, Freddie. Take it to 'em.

And also? I know I speak for all of us when I say: