Here's Why I'm Choosing to be Happy About the Noonan Signing

Share All sharing options for: Here's Why I'm Choosing to be Happy About the Noonan Signing 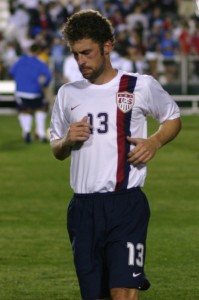 I think I'm going to choose to be happy about the Pat Noonan signing.

No, not our future. Not Seattle Sounders FC. I'm talking about the future of our guys who will someday be cast off and/or un- or underappreciated.

Because if Sigi were to leave (okay, heaven forbid, but let's be honest here, he tends not to stay in one place for more than a few years), yes, if he were to leave, this means that somewhere out in the world we could count on the fact that there will be somebody gathering up all of the former Seattle castoffs and strays we've come to know and love and once again making them "Sigi's boys."

Think about it. Tyrone Marshall played with him in LA, as did Pete Vagenas. Brad Evans played with him in Columbus. And now so did Pat Noonan. And is there a Nathan Sturgis connection out there? (Didn't their U-20 years overlap?) And how many UCLA guys has he brought into the fold?

So our players have that going for 'em. Kind of one last dip in the fountain of youth to look forward to.

In closing, Pat Noonan, welcome to the rave-green fold. Sigi's boys are always welcome. Although I think most of us hope you're either incredibly productive or have taken a pay cut.

Oh, and off topic? Thanks for being the poster boy for the need for a better system for players coming back to the US. We have you to thank in part for the creation of the "re-entry draft."

Whatever the hell that's going to be.