Share All sharing options for: Nkufo has serious pedigree

EDITOR'S NOTE: With Blaise Nkufo set to make his practice debut on Tuesday, I figured it would be good to revisit this piece I threw together after he was first signed. Some of the stats will obviously be a tad outdated, but I think it still stands for the most part.

Blaise Nkufo might be the best pure scorer to ever join Major League Soccer.

I realize that's a bold statement, but you should know that it's not just homerism taken to hyperbolic extremes.

Since Nkufo's signing, I've been trying to figure out a reasonable way to set expectations for a soon-to-be 35-year-old player most casual fans have never heard of and won't be joining the team until after the World Cup.

What I found was somewhat startling, even in light of everything I've read about him in the past few days. Not only is Nkufo one of the most prolific goal scorers (on a per-game basis) to come to MLS from a foreign first-division league, but he does so in the midst of a four-season stretch in which he's averaged more than a goal every other game in league matches. Based on what other similar -- and perhaps lesser -- players accomplished in their first seasons in MLS, it's perfectly reasonable to expect six to nine goals and a few assists despite the fact that he'll miss half the Sounders' regular season games.

In other words, it wouldn't be crazy to expect him to be the team's top scoring threat, or even one of the best goal scorers in the league.

Beginning with the 2002 season, I found 13 players who came to MLS in their 30s and could be reasonably classified as goal scorers during their previous professional experience. Based purely on goals-per-game, Nkufo was more prolific than any of them. Over the course of 335 games against first-division competition -- mostly in the Dutch league -- Nkufo has scored 160 goals, or about .48 per game.

The most comparable player in that sense was Juan Pablo Angel, who joined New York in 2007 after scoring 135 goals in 335 first-division games in South America and Europe. Granted, this is not a pure apples-to-apples comparison. While the Dutch league is generally considered roughly on par with MLS, the final seven seasons of Angel's pre-MLS career came in the Premier League -- generally regarded as the world's top professional flight. Angel was also 32 when he signed on with MLS, although he was coming off three consecutive disappointing seasons -- which is why I suppose he was available in the first place.

In any case, Angel probably represents the highest level of potential expectation. During his first MLS season, Angel scored an astounding 19 goals in 24 games and averaged 1.82 points per 90 minutes ({goals x 2 + assists}/minutes x 90).

If we assume Nkufo is able to manage a Freddie Ljunberg-like 83 minutes per game and play all 17 post-World Cup matches, production on this level would result in somewhere in the neighborhood of 12 goals and three assists. (Ljundberg, by the way, registered a .64 PP90 last year as a 32-year-old. Of course, he's more of a creator than goal-scorer, which is why I don't go into a lengthy comparison in this piece. Fredy Montero, the Sounders' top PP90 player last season, registered a 1.28 as a 22-year-old playing in his first MLS season. He scored .54 goals per game as a professional in Colombia.)

On the other end of the spectrum would be players like Andreas Herzog and Edgaras Jankauskas, both of whom plied their trade in Europe before coming to MLS in their mid-30s. Of course, I wouldn't call this a real apples-to-apples comparison, either. 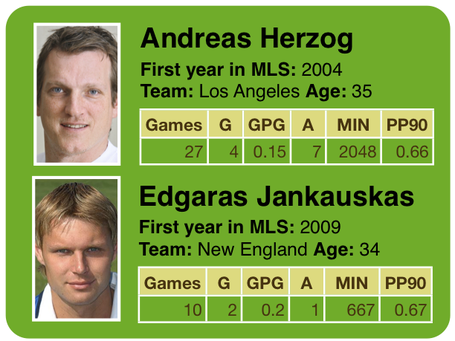 Herzog was a midfielder, for one, and was not nearly as prolific a scorer. During 438 first-division games (his most recent stop before MLS was in the Austrian Futbol Bundesliga), he scored 97 goals, or about one every five games. As a 35-year-old, he scored four goals and had seven assists (.66 PP90) during the 2004 season with the Los Angeles Galaxy.

Jankauskas was a forward, who came to MLS with 21 goals in just 74 first-division games, with his most recent pre-MLS stop coming in the Virsliga of Latvia. He scored two goals and had .67 PP90 during 10 games with New England last season.

Production at this level, still assuming 83 minutes per game over 17 games, would yield a result of roughly four goals and two assists. We could certainly call that disappointing, but that production would have made Nkufo the fourth leading scorer on the team last year in just half a season.

Like I said, though, neither of those players have near the pedigree or scoring touch of someone like Nkufo.

Among the players who scored at least a goal every third game during their first-division careers before joining MLS are Youri Djorkaeff (.35 GPG in the top-flight leagues in England, France and Germany) and Cuauhtemoc Blanco (.37 GPG in Mexico). 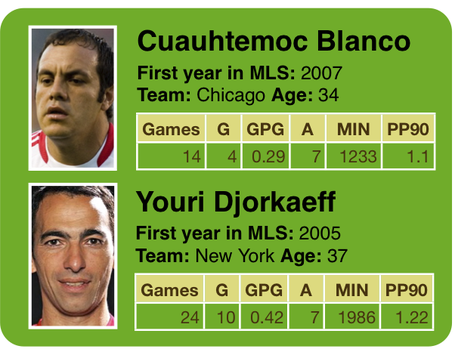 Both players averaged better than 1.0 PP90 during their first seasons in MLS, with the 37-year-old Djorkaeff scoring 10 goals with seven assists in 24 games for New York in 2005 and the 34-year-old Blanco scoring four times, while adding seven assists, in 14 games with Chicago in 2007. Those two players scored about a goal every third game for their national teams (France and Mexico, respectively) over 190 contests. Nkufo's national team career hasn't been quite as prolific (.24 goals a game in 29 caps), although he did score five goals during Switzerland's recent World Cup qualifying run.

Combining their performances, gives us a PP90 of 1.17. That kind of production for Nkufo would probably look something like this (with the previously stated playing requirements): seven or eight goals and two to four assists. If Nkufo scores like that, you can bet the Sounders will be very pleased.

Aside from Angel, the two top MLS scorers on my list were Brian McBride and Darren Huckerby, although both players need some explanation since they don't fit my exact criteria.

McBride, as you probably know, started his professional career in MLS before playing for Fulham in the EPL. I included him based on his return to MLS after four years away. And I realize Huckerby didn't actually play in a first-division, but his time in the Championship with Norwich City was at a high enough level for me to consider his experience relevant. 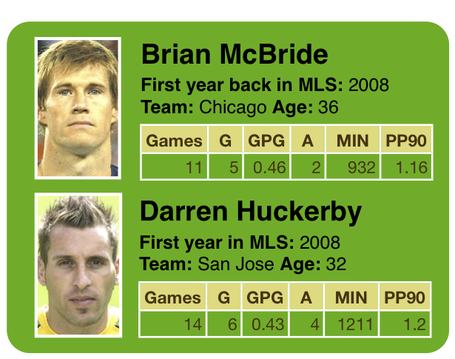 Neither of those players were serious standouts in Europe. Each scored about once every four games over 460 combined contests.

They were much more effective here. In McBride's first year back in MLS, the 36-year-old scored five goals in 11 games for the 2008 Chicago Fire. That same year, the 32-year-old Huckerby nearly carried the Earthquakes into the playoffs with six goals and four assists in 14 games.

Their combined PP90 of 1.18 is essentially the same as Blanco and Djorkaeff, and would obviously result in similar stats, although it probably serves to bolster the case that this may be more of a baseline.

At least one other player deserves mentioning: Columbus' Guillermo Schelotto. Yes, I realize he was more playmaker than pure goal-scorer when he came to MLS, but the Argentine has evolved into more of a scorer, netting 12 goals last year. Plus, he was brought to Columbus while Sounders coach Sigi Schmid was running the show.

Maybe I'm assuming too much from a playing time standpoint, though. If we settle on this figure of 1.18 PP90 and give Nkufo a couple games off, but still keep him at about 83 minutes per contest, we're still looking at somewhere in the range of six to seven goals and two to four assists. Not bad production for a half season.

Obviously, this production would come at the cost of another player. The smart money seems to suggest it would be either Nate Jaqua or Steve Zakuani that ends up taking a reduced roll. Those two players combined for five second-half goals last year. If we assume that half that production is lost and replaced by Nkufo's seven goals, that's a net of at least four additional goals. Last year, that probably would have been enough to give Seattle the best regular season record in all of MLS.

I realize there are too many assumptions made here to be relevant from a hardcore statistician's viewpoint. Still, I don't think it's a stretch to say the Nkufo signing has the very real potential to be a serious game changer and very much worth the investment.

Note: Admittedly, this analysis totally ignores utter disasters such as the signing of Denilson, who scored just one goal in eight games for Dallas during the 2007 season. As for the sources I used, I'm a bit embarrassed to say that all the international numbers came from Wikipedia. The MLS numbers came from MLSnet.com. The exception being the half-by-half breakdown for Jaqua and Zakuani, which came from ESPN. As always, if anyone has better sources, I'll happily update my information.