Share All sharing options for: Peter Nowak and Toni Stahl Redefine "the Beautiful Game" (in a potentially NSFW Way)

Because I am such a decent person and value your job in this economy, I am putting the photo below the jump. But when your boss is at lunch, be sure to click. I believe that the friend who found the photo has captured the purest essence of the Philadelphia playing style.

So. Yeah. Philly coach Peter Nowak just can't let this drop. On Tuesday, Freddie Ljungberg discussed the details of his condition after the connection between his tailbone and Toni Stahl's knee.

And that could have been the end of it. Or perhaps Nowak could even have been a class act, admitted his error in calling Freddie a diver, and let it go.

Instead he has said:

"If you want to avoid contact, I would suggest badminton or curling or chess maybe," Nowak said from the Healthplex. "That’s how we play the game. This is a man’s game. If you want to compete, let’s compete.

"If you have a problem with (your) back," Nowak said, "it’s probably because you’re an old man and playing on turf. …Sorry to say."

Or, in other words, Peter has apparently just redefined "The Beautiful Game." So that perhaps, in Philadelphia, it looks something like...this? 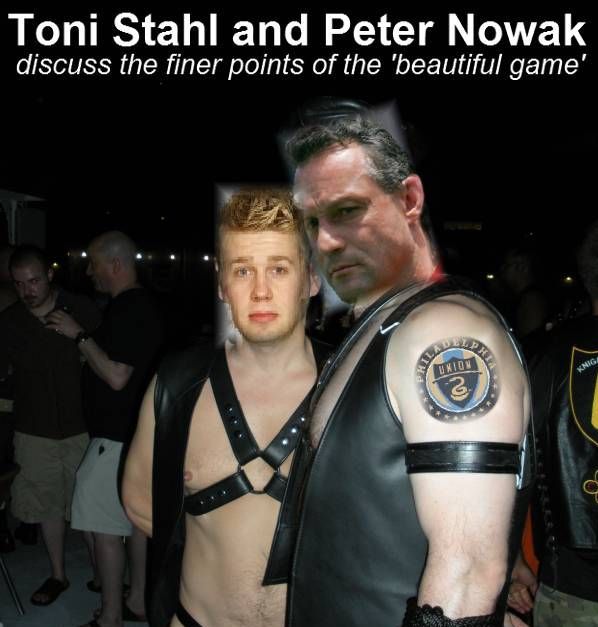 P.S. It breaks my heart to think of Le Toux playing with these thugs all season.

P.P.P.S. Okay, I confess. This is a newer version of the photo, now with less junk. (The mom in me won out.) The original is still available, however. Because who am I to deny you that opportunity?