UPDATE: In case you were planning your day around listening to the Sounders during your commute home, I've just been informed that there will be no over-the-air radio broadcast of tonight's game. I'm told it will be broadcast on MyNorthwest.com, in case you're the type that would rather listen to your computer than watch your TV. Of course, I suppose it wouldn't be all that crazy to watch ESPN2, turn off the sound, and listen to local audio there.

We decided that our best guess at a starting XI is Pat Noonan up top in the center forward position, Fredy Montero in the withdrawn forward spot, Freddie Ljungberg on the right wing and Brad Evans back at center midfield. On the bench, we assumed Sigi Schmid would give Mike Fucito some extra time off (perhaps prepping him for a heavy workload on Sunday) and use his bench spot on David Estrada, another offensive-minded player.

The graphic doesn't represent who we think will be the 20th player traveling (we're assuming Estrada is getting on the plane along with Fucito). Stephen King, Sanna Nyassi, Zach Scott? A case could be made for any of them.

It should be noted that FC Dallas essentially plays a 4-1-3-1-1, which I interpret as meaning that there's a lot of moving back and forth among their players. I'm going to try to give somewhat of a scouting report sometime tonight. If I don't get around to it, I should note that the Hoops are much better than their two points suggest. They only lost last week after Juan Pablo Angel scored on the second of two penalty kicks and Red Bull keeper Bouna Coundoul had a rather impressive performance.

I didn't make any real substantive changes from last week's card (sorry, still haven't figured a good way to get first names for the starters on there without carving out some extra space). Once again, there's a more printer-friendly version on the jump.

I guess that means Stephen King was No. 20. 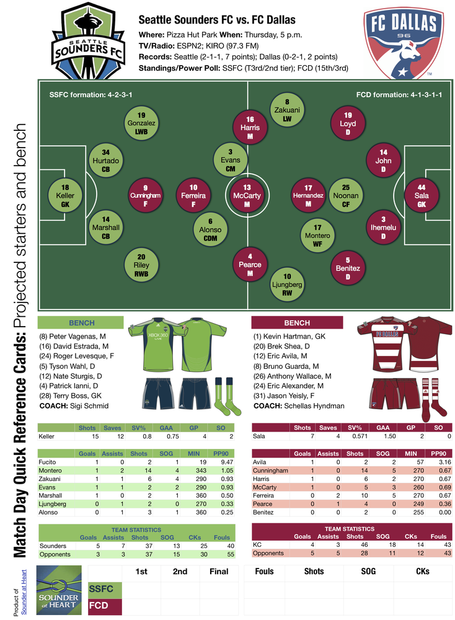