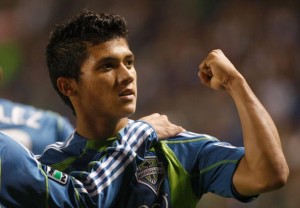 Here's to hoping. Montero grabs 5 goals, calling it now. I'll be back after the game, but not til late.

ESPN's Jeff Carlisle shoots another warning out, the Sounders defense can't get complacent with these guys.

Seattle Times preview, I have to agree that the match-up to watch will be Montero and former Shoreline Husky George John. Not so much John's stand-out ability, but Montero's stand-up ability. Sigi's not benching him, means the pressure is on to deliver tonight -> read: run.