Toronto 2 Seattle 0, Wake up you Sounders

Share All sharing options for: Toronto 2 Seattle 0, Wake up you Sounders 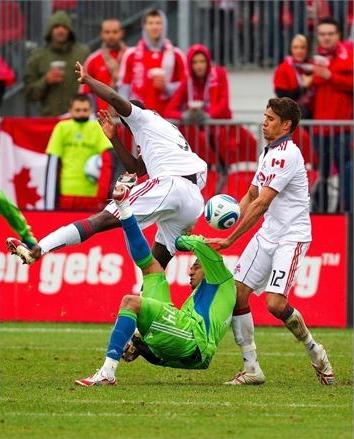 So I've had the chance to sit down and look closer at Sunday's match in Toronto. For 90 minutes, all I saw was more of the same, the same sloppy performance that I saw against KC and Dallas. It's not that those scorelines should have been bigger, but Seattle should be sitting around dead last right now.

I don't know if the team just sat on the Spanish beach this winter, but they're playing like a bunch of Ronaldo's. Not just the flopping, but at the slightest touch players like Brad Evans and Vagenas are eating turf and giving up the ball. I expect that from our forwards. Not our holding men.

'Ozzie' and Marshall are the only players who've been consistent. Other than that, the only positive I can draw is that we've got a good look now at non-starters like Sanna Nyassi and David Estrada, and Sturgis on the outside wing (still just as useless as wing-back). However, it's cost us 3 points on the road. When you say it like that, it seems like we earned 3 points, being away from home. No, really. We failed to earn at least 4.

There's a tendency to think it's OK for us to dismiss this season's start, because it's early, and this is MLS. On 8 points, we're sitting 3rd in the league for 5 weeks in. Oh, but there's also 8 other teams within 2 points or less. That's half the league.

If your Sigi or Schmetzer, you have to be at the training ground this week thinking 'WTF', but I just get the feeling they aren't too worried. The way Sigi walked off Dallas and the way he gambled with key players (benching Montero after a solid start), you feel like he's still getting his pre-season experiments in and he just doesn't care.

On the other hand, congrats to Toronto. First team in MLS to understand 'home possession'.