A Little Limerick for the Newly-Departed Jeff Parke

Share All sharing options for: A Little Limerick for the Newly-Departed Jeff Parke 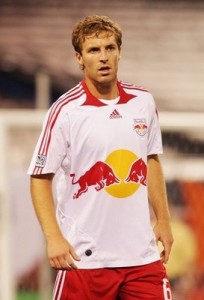 When it comes to the Sounders, the bar for inclusion in my brood (in my capacity as Unofficial Team Mom) is set quite low. In a nutshell, you must:

A) Not be a trialist, and
B) Bleed rave green and blue

Jeff Parke, who recently declared his love for the Red Bulls, missed a flight back to Seattle, and turned his back on a (reportedly large) contract offer to seek greener pastures elsewhere (yes, again...)

Well let's just say that Jeff never activated my maternal area. Not even once.

But it wouldn't be nice to not mark his most recent departure in some way. And so I bring you:

There once was a fellow named Jeff
Whose skill in the back was quite deft
Though he may have been speedy
he was also quite greedy
So again, we're the team that Jeff left