Five for Fighting: Battle for a Starting Spot

Share All sharing options for: Five for Fighting: Battle for a Starting Spot

Roger Levesque has started the past two matches on the Right Wing, and Pat Noonan came on with a decent performance for a man just cut from the Rapids. But the competition for that spot in the starting lineup goes deeper, it goes five deep in fact. There are justifications for each and every one of these players. Each has their own skills, their own talents and we can all only guess at which one is the right one to start this weekend in Sandy, Utah vs RSL.

Three players that were on the club last year. Four players that have time with Sigi. Three players under the age of 25. All converted forwards. One with a grand legacy with the earlier version of the Sounders. Another with a brief cameo with the same organization. The Fourth Round pick from 2009 and the First Round pick from 2010. The young kids have 5 goals and 4 assists in only two Reserve Matches.

These Five for Fighting, not the band, deserve your scrutiny and they are certainly getting Sigi's as well.Its not easy, but with the offensive woes there is no spot on the club that is more up in the air than this one starting role, and the three offensive players who will be on the bench.

Let's look at them each in short and discuss who should be the starter, and who belongs on the bench.

Roger Levesque: This is a man with a great soccer IQ, a work rate that impresses and of the five is certainly the strongest defensive player. He has a penchant for scoring in matches that matter, and is a supporters favorite. His footskills and speed are a bit lacking compared the rest, and he's been on the edge of MLS for several years. 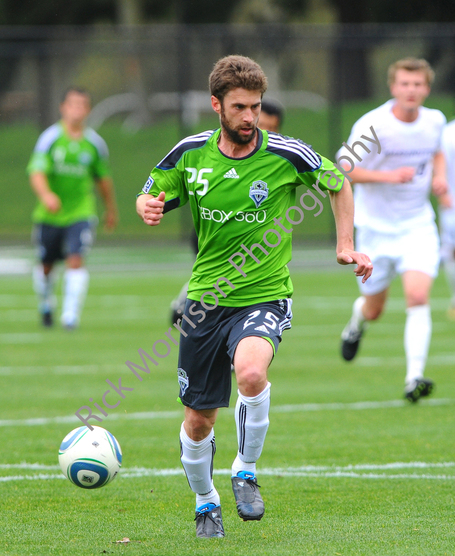 Pat Noonan: He brings a veteran presence and is someone who knows Sigi's system as well as any. Again not technically proficient he is another converted forward, and is #20 in the active scoring list for the league. He has won a major trophy and plays taller than his listed height. 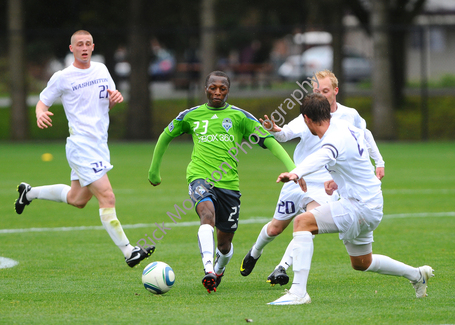 Sanna Nyassi: Recently showing much stronger on ball skills, Nyassi is most well known for his speed. His passing seems to have improved from the past two season, but we have yet to see if his shot has improved. Like many Sounders a smaller player. His primary use with Sounders FC has been as a late sub to exploit the tired opposition. 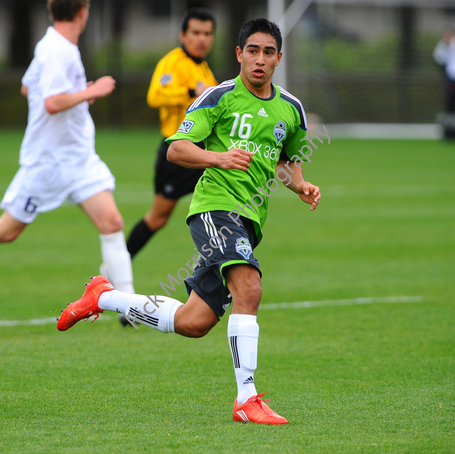 David Estrada: You just read a ton about him. But to condense, his technical skills are strong, but he has to learn when to use them. He has been the best player on the field for most of his life and is busy making the shift to the team game that the Sounders play. Fast, but probably only third in this group, Estrada offers another strong with the ball at his feet option, but he takes risks that the Sounders can't afford at this time. 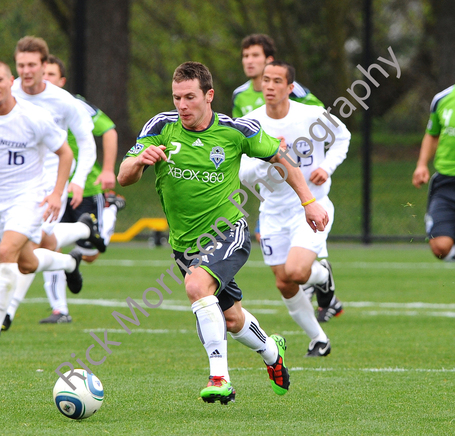 Mike Fucito: He's become well known on this blog as a pure scorer in scrimmages and reserve games. Andrew Winner over at MLSsoccersoccersoccer.com shares that his second goal against the still fresh Huskies "he took a quickly moving pass, knocked it into the air, and sent a topspin volley into the net in one fluid motion." Fucito is fast, plays much taller than his listed height winning headers in crowds. And while he may not have the strongest dribbling skills, he just scores, has solid vision and adds a ton of speed.

Again, each has certain strengths. There are varying levels of speed, technical ability and tactical knowledge. All may open up the offense, but Sigi has to look for the right equation this weekend to answer the elevation and the very strong Real Salt Lake side.

Chances are when said and done
Who'll be the lucky ones
Who make it all the way?
Though you say I could be your answer
Nothing lasts forever
No matter how it feels today

Maybe this is the time to take a chance, a risk and change that equation and unlock some youthful position.