Share All sharing options for: Yes, Yes, and Yes! 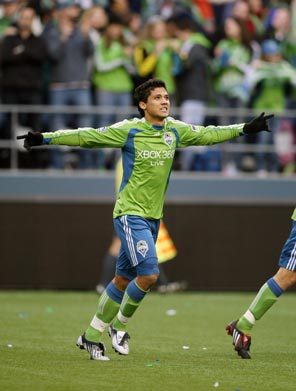 That excruciating 5 minutes of extra time just ended and I could not be happier. The Sounders steal 3 points from New York, in shocking fashion for Seattle and RBNY fans alike.

So that's how it works I guess, you take away 70 minutes of his game, and he comes on to make it worthwhile. Honestly, I don't know why we even wanted to bench him, but Fredy Montero smashed and grabbed three points. It wasn't just him, as the entire team did almost everything I wanted to see out of them. Smooth play, fantastic control, patience and levelheadedness. I don't mind leaving it late, as long as we leave in style.

This evens out our beef with Red Bull. It'll definitely but a dent in their rhythm, and it'll give the Sounders a reminder that hard work pays some fine dividends.

I won't even go into the officiating, because frankly up until the 60th minute it wasn't that bad. But after some shaky calls and "con-trov-a-see", we got what matters. Mind you, around the 60th minute we were playing a beautifully controlling game. Definitely some positives were Sanna Nyassi and Brad Evans (with the assist) hustling like hell. Oh, and Vagenas, you're good in my book now.

I don't even know how to split the man of the match honors. Leo Gonzalez was safer than a FDIC insured account. Brad Evans continued to screw up almost everything, but was a train running overtime across the field. Sanna Nyassi and Zakuani were equally impressing. Even Fred1 managed to not get as pissed as usual.

But, of course, I've got a soft spot for him. The goal he scored is the kind of goal we dream about.

Man of the Match has to go to Fredy.

Edit: Here's the video of the goal, on majorleaguesoccersoccer.