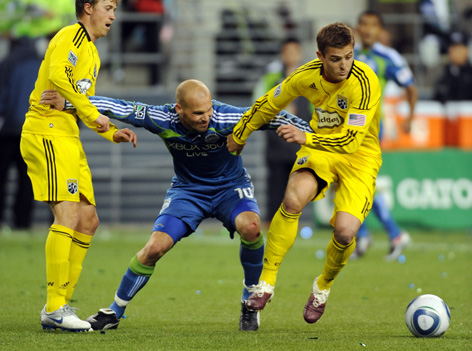 Apologies for the lateness of this post. I was caught up with other things last night, mainly opening day activities, and there was no way I could maintain the pace to make it to Fuel last night to bum a GA ticket. I would have been asleep. So instead, I fired up my dvr, popped a couple of boddington's, and went full Couch Manager mode. I don't know why, but I feel like the drunker I get, the clearer the game becomes.

Here's the unedited notepad.txt thoughts as I was watching the game.

great touches passing
good challenges
arlow htie knows how to commentate
saw my friends again in ecs
schelotto 37??!
kasey looks good in black
are you serious? connecting one touch passes from our half to their box? what?
our back 5 know how to play posession and be patient
if no errors, id be looking at european teams
mmm grillburger for 1.99 at dq
fuck yeah oswald
i like frustration, on their faces
i also like the cadillacs driving by the field
there should be an ozzie chant

someone throw something at schelotto on corners jeez
bouncy bouncy bouncy tralalala
columbus more rigid, seattle now strained
freddie, if youre onside, at least make the chip mate
there are seats in qwest field? terraces for dayyysssss
should be 11-1
ianni jumping into the header, no!
lol AR is scared by zak
fight ensues after schelotto takes 4th nap of the game and montero gets sucker punched
kasey earning his wage
soft call on sanna, oh well :( that happens when you are the sounders these days

As you can see, I am clearly ready for some Level 3's in the FA, or at the very least better than KC at commentating.

Punting aside, the first half I couldn't believe what I was seeing. It was like a entirely new team, only better. Freddie was fantastic controlling play and keeping up with the flow. The back line was playing perfectly aggressive defense, by getting stuck in and not playing like pansies off the ball. It's good to see us finally winning a 50-50 ball. Zak's goal was true quality and class, top notch composure and concentration to round Hesmer. What really had me over the moon were the 5 or 6 perfect one-touches that led up to Zak's finish. And it wasn't just that, but by 15 minutes I felt we should have been up at least 3 or 4. By half that number was at least 11-1. Of course, by the end of the match, it should have well and truly been 2-1. But this is a new week, and I am filled with too many positives from Saturday to be Negative Nancy, and blame it on the refs. It was more our fault for not finishing on, what should have been, two touches away from an incredible game.

4-3-3 should be tattooed onto Sigi's head. I don't know what he told them or what they've been doing, but Brad Evans and Zak smashed the first half. More creative freedom down the sides actually allowed Fredy to PLAY INTO SPACE, something I always shout myself hoarse every time I have to watch a desperate 90th minute attack. But this time, Fredy/die were allowed to chose their runs, and maybe it was the extra passing drills this week, but there were some gorgeous through balls into space. Half of them would have led to goals if I were Irish, guaranteed. It was fantastic.

Though in the second half, we lost a bit of glimmer as Columbus played more rigid down the middle, which caused us to settle. But still, even as the pace slowed, the boys showed that they learned a thing or two on the road last week by choosing their opportunities so much better. Exhibit A: Oswald is going to get a 40 yard screamer this season. So, despite the let up, the Sounders were merely on the wrong side of luck to be down two points.

Again, I don't usually do this, but I wasn't watching MLS. At least for the first half, I was watching some truly beautiful football, that could have been on Mars for all I know. The one-touch, small ball control, the flowing movement outside and in, the patience of the back line who FINALLY can control the tempo from the back up. It really should have been such a larger margin in Seattle's favor. Of course, statistically it was not the result we wanted, to be dropping points at home. But, on the bright side, this is MLS. Somehow, a win this week for San Jose against Colorado, and draws for Chivas and Dallas still have us in 4th in the West.

"Yeah but we've got 7 games in hand, while every other team has.." BLAHBLAH Shut up, after last night's drastic increase in performance, I am confident we'll be out of it by the start of the World Cup.

P.S. I was also late on posting this cause I spent like 3 hours looking for a picture of some vaguely similar 80's hair metal guy who I think resembles Steven Lenhart. The closest I could find was this, so I gave up.