On the Heritage Cup

Share All sharing options for: On the Heritage Cup

As you may or may not know, I'm a Bay Area native. So, I have an inherent interest in this fledgling rivalry with the Earthquakes.

I happened to be at last year's game at San Jose, and it was pretty obvious that the Quakes organization took the Heritage Cup at least somewhat seriously. The halftime entertainment included a celebration of the original NASL Quakes and there were mentions of the game's Heritage Cup ramifications throughout the program.

As you may have heard, Sounders coach Sigi Schmid had a little fun at the "rivalry's" expense. Here's what he told the assembled media today:

"Last year, I don't know how the Heritage Cup got decided because we played three games with San Jose, we won two of them and somehow they won the Heritage Cup. I thought if you win two out of three you'd win the cup, but they eliminated one of the games. So I figured we'd play these two games (this year) and then we'd decide which game we want to eliminate and then we decide who wins the cup (laughs). Sounds fair to me. It's not a big thing that has entered our minds at this stage, to be very honest." 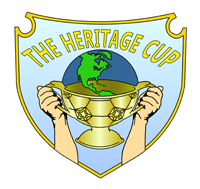 While I recognize that he was joking, in case you were wondering the same thing, here's what happened: The two teams played three times last year, with two of the games being played at Qwest. In order to balance it out, one of those results was thrown out, giving the Quakes the victory based on aggregate score after their 4-0 win at Buck Shaw Stadium.

The Quakes, their supporters and Sounders supporters all got behind the rivalry last year. But it sounds like Sounders players were not entirely clear on the rivalry, and from what I understand the Sounders never fully endorsed it.

I didn't get a lot of details, but in talking to Sanna Nyassi earlier this week, it sounded like players may have been asked to sign something acknowledging their part in the rivalry this year which would also imply the organization is taking it a little more seriously.

In any case, Nyassi thought the game had rivalry implications either way.

"We are rivals because last year we lost 4-0 and it was so disappointing," he said.

My question is how big of a deal do you think this rivalry is? Next year, the Heritage Cup will presumably also include the Timbers and Whitecaps. Is there any value in entering the four-team rivalry as the standard bearer?