Share All sharing options for: Frustrating Loss at Home. Again. 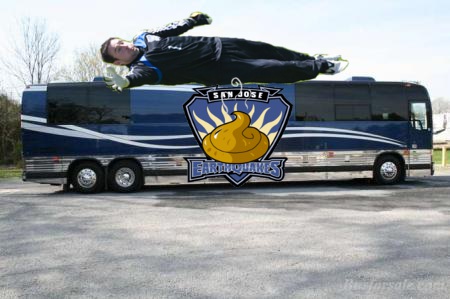 After sneaking in an offside goal, all San Jose had to do was park the bus and frustrate every single damn person in Qwest Field (except the f*ckers in 203).

I was wandering around helping my womanfriend with her bee research project, so I DVR'd both the CL final and the Sounders game. I sat down to watch both games back to back (well, fast forwarded through the Inter win - congrats Mou), and it was a torturous way to spend a free evening.

Here are my collected-live-as-late blogging of the game, in notepad form.

looks like we got upgraded, fredys got some yellow boots and kasey looks better in white
alro white doesnt know what a geoduck is?
lots of early empty seats
holy shit, i can hear bluest skies from the crowd, one of the best moments in my life

lots of ping pong play for the start
great tifo for sounders legend walt daggatt, very classy
great golly, wondoLOLski smashes us from an offside position. thanks ref.
ref makes dumb call about ball on the sideline
riley is frustrated that nyassi played the ball out. ironic.
montero hassles a guy down onto. moar like this please.
nyassi screws another good buildup straight at cannon
literally grabbed the edge of my seat, great footwork by zak, so slippery
sigi has the scarf on again? suddenly feeling superstitious...
nyassi's got some tekkers
held my breath again! great buildup through sheer determination
800-745-3000, for boca ticket packages. mmm hotdogs.
great attacking push in the first half, love it. cant even tell we're down.
nyassi gets driven through, prus with another noncall
freddies keeping numbers, heh
poor finishing is costing us DEARLY

and montero is inches too short
too many chances, its only a matter of time
SJ defense is too watertight, how can they stay this organized
frustrated freddie, thats what ill call him
montano on, can he make the impact on the right?
sigi chewing on his scarf, as am i, not a good sight
sounders starting to unravel
come on sounders score a goal, score a goal
18-3 on shots, are you kidding me
FUUUUUUUUUUUUUuuuuuuuuuu...

I could write up all of my feelings, but I'd just be grasping at straws, trying to plug the gaping hole with toilet paper and tissues. Really, I loved the effort the entire team put on the field. Frustrated Freddie fought hard, Zak and Nyassi hustled to try and make THE play. Even Montero tried to will the ball in, but in the end he just seemed drained of gas. Not in terms of physical stamina, but he just tired of ideas, and it was glaringly obvious that the whole team was facing a creative brick wall. Our will was sorely tested, and did not bend the right way.

The one thing I noticed was that Sigi seemed off. There were several video shots of him looking very glum, like he couldn't figure out what was needed to get that click. Watching the game, I think we all felt it was just a matter of time, that eventually one of the EIGHTEEN shots would ping in. No matter how defensive San Jose played, there should have been a way for us to sneak under, or through, the bus. But, instead of throwing their defense off, our finishing lead to frustration.

The Sounders played good attacking ball. They provided gripping entertainment, with great buildup in plays, that in any other city would've lead to a rout. But, in a way, this only makes the loss so much worse. Knowing that we lost, at home, giving it our all, throwing in our strongest lineup, and then our secret backup plan, I'm starting to have the helpless feeling that Sigi currently has.

So yes, I think it's fair to say we are in a sophomore slump.

But, slumps are made to be broken.