The most decorated club team in the world got a handy lesson in the world's game. The Electric Yellow Seattle Sounders beat Boca 3-0, with goals off of Roger Levesque, Pat Noonan, and Michael Seamon. 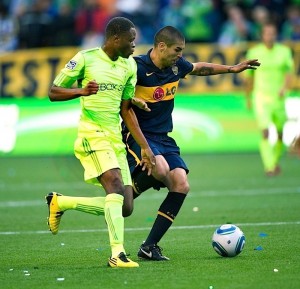 Arlo White got it spot on with his keys to the match. The bright yellow boys were all smiles as they relaxed, had some fun, and scored three goals. Though it was their reserves against our reserves, there was entertainment to be had, and a few positives to take away.

Defender Jeff Parke got his glittering debut, with a great chance for a header goal that pinged off the underside of the bar. After a pretty typical MLS showing for most of the starters, Boca's free flowing play provided the inspiration for the Sounders. Rookies David Estrada and Miguel Montano took two touches to get warmed up, but once they were, they gave the 40,000 fans in attendance some great attacking football. Villanova draftee Michael Seamon has barely had time to store his cap and gown, but he smashed in a long range beauty to cap off the night. Arlo White then provided the rest of the night's entertainment - "Seamon's all over the field!", "Seamon's on the ball, dribbling", "Seamon's everywhere, isn't he" - for the last 20 minutes of a fantastic game.

The Sounders will definitely be happy with the result. Our defense looked squeaky clean throughout the game (did anyone see Riley's fantastic sliding tackle? holy smokes). Some rookies got the step up, and showed that they more than deserve some playing time. The only negative was Osvaldo Alonso coming off injured after only 20 minutes. We wish him the best

There's got to be something in air, because Boca is the most recent of the touring clubs to lose against MLS teams. After Red Bull beat Juve 3-1, and DC United beating Ronaldinho and Pato's AC Milan 3-2, I think it's fair to say MLS teams are doing better. I say bring on Celtic. If we can use these games to loosen up a bit and find some form, then I can't wait until we really hit our stride after Blaise arrives.