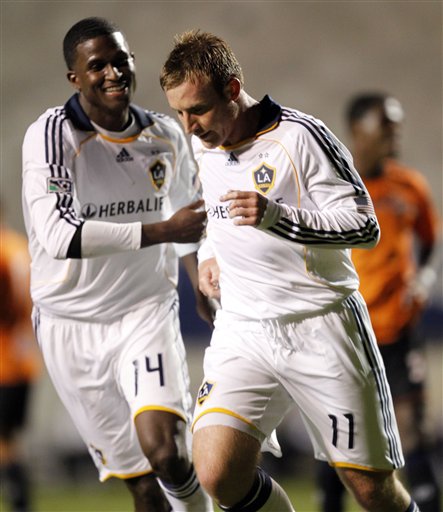 Earlier this week, I watched LA's road win against Colorado, primarily to scout out the competition, but mostly just to confirm all the hype around Edson Buddle with my own eyes. Colorado set out Week 5 to disrupt LA's rhythm, to hopefully knock them off the start of what "was" considered a tough 5-game road trip. LA climbed down from Mile High with a 1-0 win.

As much as Seattle's draw with Columbus belied the level of dominance, the Galaxy absolutely controlled Colorado. Even though Edson Buddle failed to make the scoresheet, he peppered the opposition with dangerous shots with pressure that never let up. And after seeing the flowing dribbling and passing of unbeaten LA, I realize that winning this game won't just be about shutting down the channels that feed Edson Buddle. LA's success so far (and 2 goals against in 7) is hugely due to the watertight defense that Ricketts commands.

The Sounders haven't really convinced me that they are not the same inconsistent, misfiring team as last season. So not only will our defense have to mark Buddle, close down their speed on the wings, and dominate the middle like a home team should, we have to somehow wiggle one into the opposite goal.

If you can't tell, I'm kind of intimidated. OK, I'm scared. LA is at the top of every power ranking list right now, and deservedly so. BUT, I am hopeful. For one, we are at home. Second, we've got a new attacking mentality. And lastly, I've noticed that the Sounders play to level of their opposition. Against Dallas, we played utter shit. Toronto, we stepped up to match the level of passing and control. Against Columbus we hit the ground running, asserting dominance and attitude.

So against a fluid, efficient, aggressive yet tight, and high-tempo Galaxy?

I expect us to match them stride for stride. 3-2 for the good guys.

Players to watch out for: Edson Buddle, Alan Gordon, and AJ DeLaGarza.
Players to step up: Freddie Ljungberg, Brad Evans, and James Riley