USA in a Must Win; or a Draw and some Help - Seriously, just WIN

Share All sharing options for: USA in a Must Win; or a Draw and some Help - Seriously, just WIN

Just after 7 AM Pacific Time the USA will take on the supposed minnow of Group C for the opportunity to advance into the knockout rounds of this World Cup. To do so they will face a team with a very clear identity. The Algerian National Team is French, and Arab, and African. Its best players play in Europe with many plying their trade in Algeria as well.

The Algerian side does not have a home continent advantage, as the Sahara separates the North of Africa on cultural and footballing levels. Oddly enough it also has not gathered support from the Arab world as some sort of pan-Arabian anti-Americanism. With Algeria's biggest rivals being Tunisia, Morocco and of course Egypt it just wouldn't make sense for those nations to root for a nation that so often is in opposition.

In some ways the Algerian Green remind me of the Sounders. They control possession well, take plenty of shots, but not enough are on frame. But they of course are different. These Desert Foxes have been quite inconsistent over the past two years. They dominated their Group in African Qualifying and shot up the FIFA rankings beating Egypt two of the three times they faced off including that playoff in Sudan. In the Africa Cup of Nations they struggled against Malawi, and then went on a run again, beating Cote d'Ivoire in the Quarterfinals before losing to Egypt in the Semis. They then finished by losing to Nigeria in the Third Place match.

World Cup South Africa has seen similar inconsistency. Against Slovenia they had a man sent off and struggled to a 1-nil loss. When facing England they played well and managed a 0-0 draw with a young highly inexperienced keeper. I expect M'Bolhi to start against the USA as they ride the hot hand.

To borrow from Pitch Invasion it is time for the USA to cowboy up and declare themselves not just favorites in this match, but a footballing nation that demands its deserved respect. I expect Maurice Edu to start alongside Michael Bradley in a central midfield role, but up top so many things could happen as a change will be forced.

Right now, the proper choice would be to select Edson Buddle. He and Landon have the communication and knowledge of each other that can not be gained in training, but only in hundreds of minutes on the pitch in competition together and so our USA match card has him as the starter. There are plenty of other choices that Bob Bradley could make though.

No matter those choices the USA will be the stronger team in a positional breakdown, and a victory would be the sweetest way to advance. It is time for a little history writing, it is time for the Desert Fox to be defeated by an American again. Eisenhower did it in the 40s, who will declare themselves today? 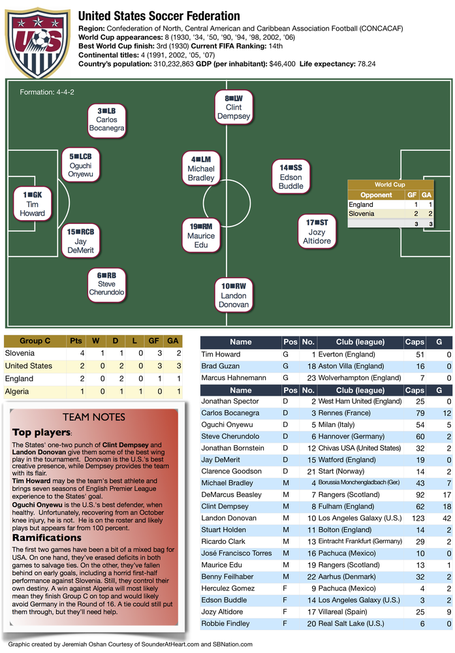 Consider this the gamethread for the match - 7 AM ESPN