Share All sharing options for: GameThread: U.S. takes on Ghana

With a win today, the U.S. Men's Soccer Team would advance to the World Cup quarterfinals for just the third time in its history -- and for just the second time since 1930.

Standing in their way is a Ghana team that now represents Africa's last hope for a deep run. So far, African nations have enjoyed little home-continent advantage with the six teams collecting just 14 points and none of them accumulating more than four during the group stage.

That Ghana has advanced this far can hardly be considered a shocker -- the Black Stars also made the knockout stage in 2006 -- but missing their captain and best player Michael Essien certainly makes this at least a mild surprise. So far, they've been doing just enough to get by.

Both of Ghana's goals have come from the penalty spot via Asamoah Gyan. Facing an Australia team that was playing with 10 men for much of the match, they only managed a tie. If not for the Socceroos' falling apart against Germany in the group's first game, Ghana's loss in the final group match could have proven fatal.

The U.S., as some of our European readers have pointed out repeatedly, hasn't exactly been dominant either. El Pais de Todo (that's supposedly what they are calling us on the Spanish-language news shows) drew an English side that has not looked sharp, needed to erase a two-goal deficit to salvage a draw with Slovenia and required a stoppage-time goal to dispatch Algeria.

None of that will matter after today. A win by Ghana will mark the longest run in its history and a win by the U.S. would tie their longest run since 1930. It would also set up a quarterfinal match against the winner of Uruguay-South Korea, and a reasonable shot at a semifinal berth.

All indications are that Bob Bradley will go with a similar lineup as he did against Algeria, with the lone exception being Oguchi Onyewu's return to the staring XI. Ghana has been playing what essentially amounts to a 4-2-3-1 and is expected to go with a lineup very similar to its other matches. 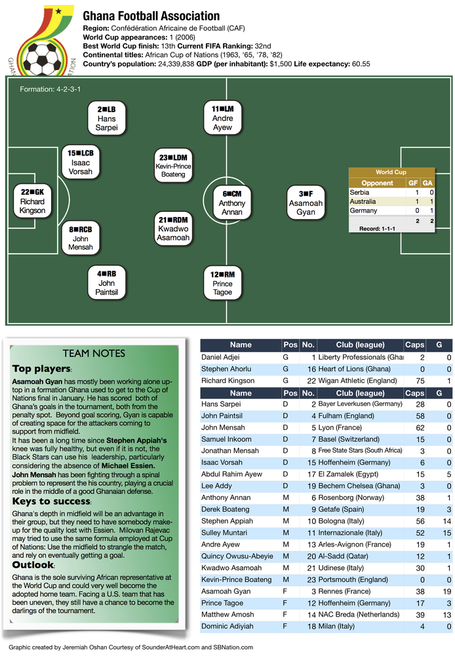 Thoughts From Dave - Rather than do two Gamethreads/previews I thought I would add my thoughts here. One of the things that should be noted is that the USA's offense is as good as everyone thought it would be. The Yanks have scored 2 goals a game if silly things like Referees didn't get in the way. But the defense has been as bad as expected, prone to mistakes in communication and in cases just a lack of skill the backline has given up a goal a game.

Whereas against Algeria and Slovenia we saw an up and down match with both sides attacking, today though we should see a slower match as the Black Stars have slowed things down while not controlling possession. The Americans also didn't control possession on average, but almost all of that was due to their countering strategy v England.

The Americans must not fall into playing a direct game and bypassing their midfield players. Landon must get his touches, and generally about 35 yards out or so. Breaking the crowded midfield will be vital. If they do use the punt and pray I expect it to go to Altidore or Dempsey with Landon running off of them.

By www.fivethirtyeight.com the USA is one of the least likely nations left to make the Semi-Finals, but that isn't because they are in a strong sectional, but because they are 50/50 v Ghana and Uraguay gets a lot of respect in Silver's system. Silver just updated for the most recent result and tweeted the following

The winner will face Uruguay after their 2-1 win over South Korea. The champions of the ancient era have finally been scored upon, and are the first South American side to make it to the Rd of 8 outside of Brazil/Argentina since 1978.

Today's game is bit. Two of the previous three matches in this World Cup have set records for viewership, and while this one may not challenge the USA v England 18 Million American viewers, I expect it will be close. Local radio will also have the match on 950 AM KJR Seattle.