Share All sharing options for: Moving on, Hello Little Brother

Wednesday 7:30PM, Portland: a showdown in what will probably the last derby match-up between heavenly forces and evil arch-nemesis before the I-5 rivalry is renewed in full vigor. That is to say, this time next year the Sounders and their eternally sniveling little sibling will be bumping into each other in the hallways and classrooms of MLS. 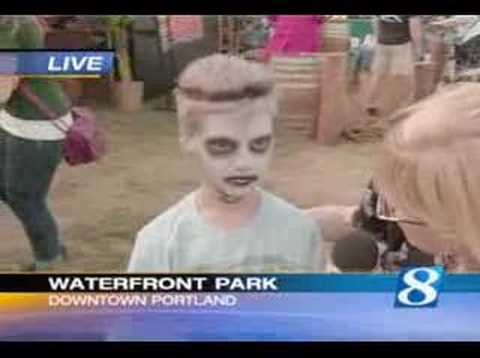 You see, people in Portland like to believe they are 'true' soccer fans (despite liking turtles), and that the wonderful fan support we've built up in Seattle around our MLS team is just a plastic and fake product of Starbucks FC. In fact, they are such expert connoisseurs of the world's game, that when their new MLS logo was finally revealed in public last week, it was met with great anticipation by The Hipster Army.

I mean, most of us in Seattle didn't immediately like our new logo, but we realized that we were moving up onto a bigger stage and that it would grow with our identity. But no, the Hipster Army are so desperate to cling onto the tiny amount of history they have that they booed their very own logo unveiling, with chants of "you f*ckd up". It's embarrassingly adorable, mostly because because I don't think their new logo is all that bad. It was one thing for some Seattle fans to grumble about our logo's authenticity, but very much like when a younger brother witnesses an older brother, he must follow suit in louder, more exaggerated terms.

Grrr. Sorry. Portland never did anything bad to me other than exist, but as can you tell, I am still very much a frustrated Seattle-ite when it comes to soccer. Things aren't quite going our way in our sophomore year, and our latest outing against Philly was very disappointing. Still, I am not without hope. In fact, I have optimism, a value rare in Seattle that I learned of during this World Cup. We still have plenty to look forward to. We have half the season left to give our best playoff push. The possibly exciting prospects of the CONCACAF Champions League have yet to start. And, we're still waiting on our new toy that's taking longer than a woot order to arrive. But when it does...

The best part of my optimism is that we get to play Portland tomorrow. And if our history teaches us anything, it's that these Seattle - Portland games usually stoke the fire just a bit. We probably won't be deploying our starters, but you can bet that the behind-the-scenes players in our defense and midfield will be getting some valuable playing time. And by just being out on the field in PGE park, they're going to get a whiff of what it means to play motivated soccer. It'll be like Boca Juniors. Only, meaningful.

In terms of tactical analysis, I don't think we need to look too deep into it. It's Portland. But for what it's worth, Portland have been having a miserable season in the USSF-2 this season too. Again, just as Seattle was excited at the prospect of MLS on the cusp in our last USL season, where we stopped playing like it mattered and started experimenting with new systems and giving players tryouts to step up, Portland are very much doing the same as we did. With young and bright players like Bright Dike (I'm not even kidding) on their roster, expect to see some young guns mixed with attacking options. Kind of like what Seattle will likely put forth tomorrow night. Other names we'll see: Steve Cronin, Takayuki Suzuki who scored this against us back in 08, and RSL loan midfielder Alex Nimo.

What I would like to see: Start Montaño. He has the ability to bring the ñ. He's young and unpolished, but this would be a good game to put him in the pressure cooker with the chance that he might come out shining. Everything else right now, I don't care about. We're too screwed over for one game to change everything before Blaise arrives. Which, I've been searching all over the interwebs for any sign of Blaise's flight number into SeaTac, but I haven't sniffed anything yet. I'll let you know when I know for certain, but for now it's hopeful he'll be available for the Galaxy next Sunday. Maybe. I really hope so.