Share All sharing options for: Bring Better Beer to Qwest

What has been a dream of mine for some time will come a little truer on Saturday. The Emerald City Supporters and Big Al's Brewing developed a beer together which will be served in 4 locations inside the stadium. I understand the need for mainstream beers, but I still don't understand why they are being called premium, nor why we are paying so much for beers that are amongst the cheapest in the region.

The demographics of the Sounders audience demand something different. I'm thrilled that the ECS found a way to get something done. Yes, Big Al's has been available, but somewhat hidden. Now we know exactly where it will be.

Below the break is the release from the ECS leadership.

Sounders clearly haven’t peaked yet but now would be a good time to do so. Even if they don’t there will be plenty of Brougham Bitter to help you through the night. The Brougham Bitter is the new ECS beer brewed with BigAl's Brewery out of White Center. Brougham Bitter is a well balanced English style ESB that is easy to drink and comes with a 5.5% kick. Come down and taste this for yourself and be a part of history as this is the first soccer beer brewed specifically for Seattle's soccer fan and Sounders supporters. It may not be a first on a global scale, but it is truly a first in American soccer and MLS! This beer has already converted plenty of hard A drinkers....60 kegs are ready for consumption and the beer will be on tap at Fuel all season long as well as the Atlantic Crossing, Temple Billiards, and other bars yet to be defined (hopefully at most ECS partner bars http://www.weareecs.com/partners/). Most importantly the beer will be on FOUR...yes FOUR taps at Qwest field: two taps behind Section 122 and one at Section 104 and Section 107. ECS has heard the complaints of those wanting quality beer at Qwest and has answered!

The Brougham Bitter will be officially revealed at 3 pm at Fuel at the half time of the USA-Australia friendly which will be televised at Fuel. YES, we know its early, but its a perfect start to another sounders gameday with a warmup by watching the USA nats prep for the world cup while enjoying Brougham Bitter. This gameday is an important one as now would be a great time for Sounders to find the back of the net at home. 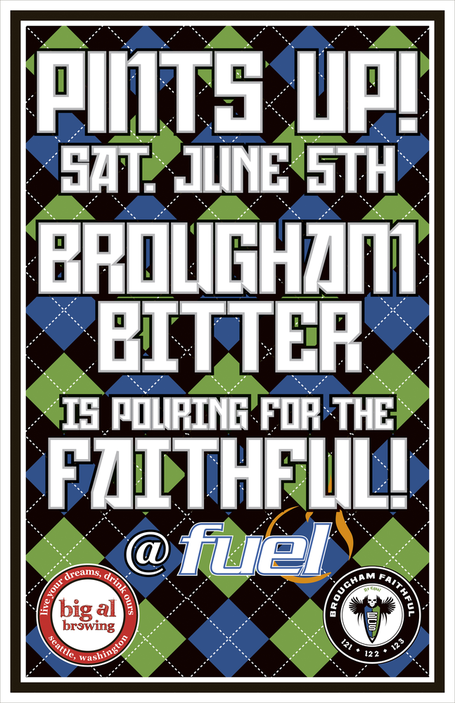 Next we just need one tap of craft beer at every food & beverage station.