Seattle lose to Celtic, but not the last of meaningless games

Share All sharing options for: Seattle lose to Celtic, but not the last of meaningless games 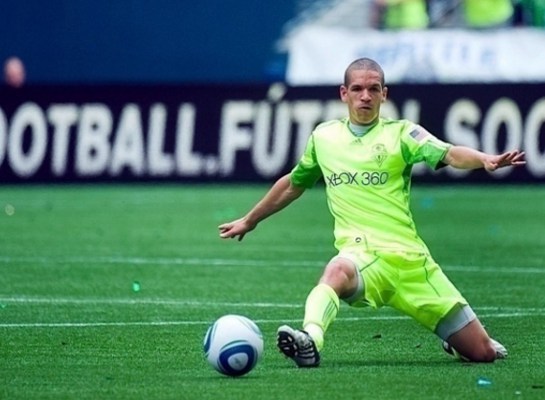 I was debating between starting with a pichur of our new Golden boy Blaise or this one, but this one won me over for some reason. I think it's the grace and elegance that Alonso brings to the frame.

45,631 fans came out in rave green, electric yellow, hoops and red hair. It was another exercise of international friendship (marketing) that did more for our team's image than it did for results. I can tell this by the 2-1 scoreline, but that isn't to say that it's the Sounders fault. Once again, refs make Americans everywhere guffaw in confusion.

Sadly, I missed the game, as I was stuck at work for the entirety. However, I did see several people in rave green and asked about the result. When a customer told me "Our keeper got a red card", I immediately thought "Oh Kasey...", but then was told it was Terry Boss. Which then I would've thought that Kasey would then replace. When I got home, I saw that it wasn't. Who the hell is Jordan Jennings?

Anyways, the fact that the scoreline remained so low kind of has me wondering how we didn't win? Looking at the starting line-up, Sigi was clearly going for the win (in a completely meaningless friendly - by this I mean not so meaningless), by starting almost a first XI team, with the exception of keeper. This had me thinking that he left out Kasey because of some sort of lingering injury, because with Colorado a week away I don't see why he shouldn't have started. Anyways, speculation.

Because I'm waiting to download the match and watch it, I can't say much. I'll just help you along for meaningful chatter, in a bit. For now, I can say that now that the game is over and we lost, the match was meaningless. However, had we won with the likes of David Estrada firing us back into it, and had Fredy stayed on if the game was reffed by a total idiot, then it could've been a fantastic chance for the team to gel together for the first time with our new teammate. It's always critical to get a feel for how a team plays together when new faces show up. If you don't get that, then you're screwed really. Practice and training is great for drills, but nothing is more important than actual game time. So I hope Blaise got a good chance to feel out his new home and teammates. From what I saw, he looked good and had a couple good link-ups. But that early red card must have him scratching his head thinking WTF ref's drink in America.

And in terms of that ref, I have nothing to say. I'll let the ref speak for himself. Let's ask him some questions.

Q:Why are you such a negative Nancy?

"I did not feel the Celtic player was going to retain possession and therefore did not play an advantage."

Q:Would anyone else who isn't an idiot make the same call you did?

"The red card is mandatory as, under Law 12, the keeper is guilty of denying an obvious goal scoring opportunity by an offense (trip) punishable by a penalty kick."

Oh. Fine, I see how it is. Go and run back to your little rule book, you... you big fat fathead.

All unexplainable negative Nancy's aside, we had one great positive that lasted 60 minutes. Blaise got his debut at home, albeit without the win. Still, his impressions of the following.

Q:What do you think of your new team, and how did you feel about your first game?

"I'm happy. I finally played my first game with my new team and my new teammates. It was fun. When you arrive like that, it's always difficult, but finally I could play and now I can move on and focus on the next game."

Q:What do you think of MLS? After playing with your new teammates, are you regretting taking such a nosedive in competitive play, or do you think MLS can maybe be a challenge for you? Can you teach us how to play "football"?

"I never compare the leagues or the teams because it changes a lot, but this team can be a good team. There's a few things we can work on to get better, but we try to keep possession and that's good."

It's good to see a positive reaction from Blaise, knowing that it could have been a little better for him. The hard part now is bearing the remainder of this season, with 14 or more games left to go. We have a full week (whew, finally) until our home date with the Rapids. In the meantime, I'll take a look at the rest of this season as I get ready to write it off as done. I kid, I kid. We definitely have a chance to make the remainder of the season not so lost and hopeless. It's just very small.