The Sounders Finally Show the World, We've Grown Up

Share All sharing options for: The Sounders Finally Show the World, We've Grown Up 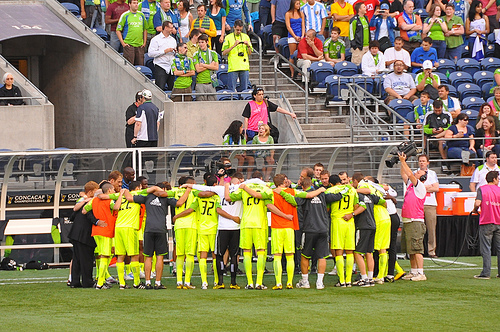 Well the world may not have been watching, or many people in Seattle for that matter. Attendance was around a low (for Seattle) 17,000 for the midweek CONCACAF Champions League fixture. Not quite as packed as it usually is, but you couldn't really tell from watching it on TV. But in Seattle's first ever Champions League appearance, after qualifying by winning the US Open Cup in our first ever season last year, the Sounders got a historic win to open all new accounts.

Audible chants of "Seattle Sounders" rang back and forth in the dying minutes of a fantastic game. The Sounders won 1-0, and for the first time in a long time, I was able to enjoy every minute of it. Let me take that back, I didn't enjoy it. From here on out, I hereby profess my love for the CONCACAF Champions League.

For the first time ever, Seattle played in an international cup competition. But, more importantly, for the first time Seattle played an international team with a different playing culture than teams in MLS. And it wasn't a meaningless friendly where both sides played like they didn't care. The match was by no means beautiful, and certainly wasn't as entertaining as watching Barcelona stomp on us 4-0. But, for some reason, I truly enjoyed watching the little things happening on a field in Seattle, and not on a field in South America or Europe.

I always say that soccer is as much about your opponent as it is about you. The best players in the world manage to bring out their best level on a consistent basis, that's why they are the best, but usually in the midweek games that you have to grind out, you usually play down the level of your opponent. That's why watching an average weekend game in MLS is so incredibly frustrating, because the game of football that I'm used to seeing with flowing moves, passing buildup, and patient play devolves into mindless back-and-forth ping pong, overly physical tackles, and straight out running in circles. It's not that Americans lack the manners and etiquette of soccer, it's just the more uneducated, brusque style of play. No complaints, it's just how it is.

That's why it was so refreshing to see the Sounders, my Sounders, playing up to the level of this seemingly small club from some Central American export country (not being sarcastic). For all we know, Metapan could be any other 2nd league team from Chile, Pakistan, or Gambia. But in reality, Metapan are a versed club in the heart of futbol. And on the shared pitch in Seattle, they were able to share their unique style of it with the Sounders, to which we were able to learn and adapt to.

Of course, at first it was a big scrappy and ugly, the usual scene of two international opponents feeling each other out. Three yellow cards out of nowhere, and some dirty plays with some pretty convincing acting by the El Salvadorians. It took 20 minutes to get a rhythm. But, Seattle played through it all looking incredibly comfortable, rotating play, creating attacks with patience. Quite literally, playing like they understood their opponents, and better yet, like they understood the game. Flailing by Montano and Riley was kept to a minimum, replaced with fantastic passing. Sanna Nyassi got my vote for man of the match, as he kept the right side of the field busy with his numerous attempts. Even despite the wasted substitution of Vagenas coming off (dude, just retire already), Alonso and Seamon were like little trampolines, they just shuttled the ball quickly through the middle to allow really smooth and beautiful buildups. It took me about 45 minutes before I realized what I was watching, and the fact that I was smiling like an idiot. 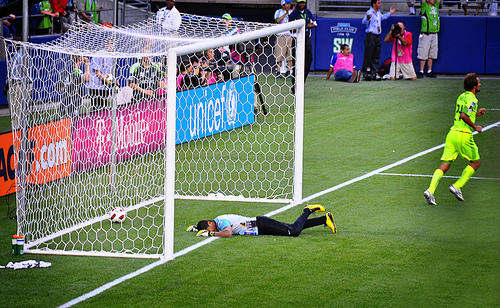 I'm not trying to be "O HAY I AM FOOTBALL ELITIST" with all this jibberish about trampolines, but I just got back from playing a small rec league soccer match. My team is a rag tag bunch of free agents assembled in the last minute, but we've got a decent record so far. Actually, we're usually on the receiving end of a beating, as my team's organization and (lack of) athleticism clearly shows it. Play is scrappy, unkempt, and you would kind cleaner passing on Aurora 5 miles from a divebar at 2 a.m. But, today we played different. We still lost, but it was one of those days where you could palpably feel a change in pace, where things slow down and you understand and see things in the game. It's not rushrushrush, but hey, make that pass, open that hole, foul that asshole hard. The little things. Watching the Sounders play Metapan was kind of like that.

So the great thing is that today the Sounders notched their first ever win in their full international debut. It wasn't glamorous, with stars Nkufo and Ljungberg missing. But it's fitting that when wearing the Electric Yellow kit designed and marketed to give international audiences more awareness of who Seattle are and, "My, I say, that kit is dashing," ("jajaja, que feo" in Spanish), we showed that we can handle international play. If you'd asked me last year after winning the Open Cup what we could make with our chances, I'd laugh and tell you that it was beginner's luck and that we're still too young. As a club and organization, the Sounders indeed were just an immature team, not saying that it's bad. It's just that with certain PR events, player signings, and the results on the field, you'd have to admit we looked slightly unprofessional. Of course, at what point does a new club "grow up"?

I think after taking the beating we've taken in our MLS sophomore slump, putting together an odd show in the Open Cup, and still managing to win our first ever Champions League match in typical Champions League fashion, I can finally say it: we've grown up. We're a real club, we can take slumps, we can take shitty fans and fantastic fans, we can take overpaid nancies and underpaid bulldogs, and we can show that we belong on the world's stage in the world's game. From here on out, growing pains ease and the energetic and frantic movements turn into a practiced and habitual swagger. We play like a real team. Not like an MLS team, but a team that deserves to be on the field.