Once More, with Passion: USOC Quarters Galaxy at Starfire

Share All sharing options for: Once More, with Passion: USOC Quarters Galaxy at Starfire 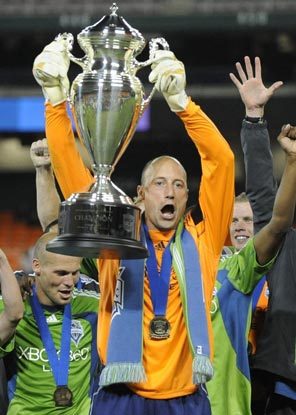 Where: Starfire Sports Complex
When: July 7th 7:00PM
Who: Los Angeles Galaxy
What: US Lamar Hunt Open Cup Quarterfinals
Why: Defend the Cup

Tickets are still available here, for only $15 each (not including parking and transportation to Tukwila

In our opening season, we astonished everybody by claiming silverware in the US Open Cup. The equivalent of the side-tourney that you play in rec leagues, where any registered beer-league team can start from the very bottom bracket and play knockout rounds all the way to the grand national final. It's like the FA Cup in England, the Pokal in Germany, or Copa del Rey in Spain. It's certainly no easy feat to win these knockout tournaments, because each game is life or death, and as you've seen in this World Cup, upsets happen. It's no surprise that in this year's quarters, there are two USSF-2 teams, the Harrisburg City Islanders, who downed NY Red Bull, and the Charleston Battery who beat the Chicago Fire. Seattle faces a mountain to achieve an upset, facing off against LA Galaxy for the third time this season.

The Sounders goal tally against LA is 1-7 in two games: a 0-4 loss in May, and a 1-3 loss yesterday. Considering we just played them, it wouldn't be funny if LA caught the same exact flight as the Sounders did on their way back home.

LA are red hot right now, even after the long two week World Cup break. Against us, Buddle and Donovan looked like they hadn't even left, with Buddle picking up a goal and Donovan the assist. The Sounders on the other hand went down early, both on the scoreboard and mentally. Sigi tried to shift the balance in the second half by replacing a midfielder for a young forward, but it did no good.

The Open Cup usually sees the reserves and youth, up until about the quarterfinals. Thus, it's around this point of the tournament that managers make the decision of how serious to take these games. Against a USSF-2 in the quarters, you could maybe get away with a reserve/starter mix. Against LA? You'd be crazy not to put out all your best offensive (and defensive) weapons. However, the hard part for Sigi is that he has to juggle this insane schedule that we're in. Since last Sunday, we've played three games. After tomorrow's USOC match, we have another 3 games until the 18th, one of which is a meaningless friendly against Celtic. Our only incoming backup looks to be Blaise, as there's no word on Fucito or Alonso being fit soon enough.

In other words, there aren't many situations worse for Sigi right now. He has to manage his misfiring forwards, along with keeping the bench guys happy. Guys like Roger Levesque and Nate Jaqua, who played long minutes in the win over Portland, and young ones David Estrada and Montano, who are itching for shots. You can't just immediately drop them, while overplaying your starters with the risk of burning them out too soon. We're only halfway through the MLS season, and Champions League hasn't even started yet.

One thing that can be said for great teams is that they make certain hectic weeks like these seem easy. It comes down to physical fitness and preparedness, but man management from the coaching staff can really help a team get through it. Psyching up certain impact players, like getting our youth to shine when the pressure is on, would help keep our starters rested. I just don't see a situation where we can get by with only playing one group of players. Eventually at some point in the season, everyone is going to have to earn their paycheck. Now's a good time to step up and show it.

LA have so many great attacking weapons, but here are some dangerous names: Michael Stephens, Alan Gordon, Edson Buddle, and Juninho. If you didn't see Juninho destroy Kasey's confidence of reaching high places, be warned. He's 21, and Brazilian. He'll probably be at Starfire pestering our midfield. In response to their awe-inspiring attacks, it'd be nice to see our defense pull their heads out of their rearends and play with some passion. James Riley I feel bad for, since he seemed genitally helpless and beat. I'm sure he'll want to bounce back in a good way. But Jeff Parke? Come on, he could at least show some sort of fight and drive. Hurtado wasn't the loud defensive leader, but he was a cornerstone because he silently worked his butt off and stayed extremely focused. Jeff Parke needs to up his game.

A reason to go to the game at Starfire is that this might be the last chance we get to see Landycakes. As a big USMNT guy, I can't deny that he'll likely be playing in Europe next season. He is, without doubt, the best American player of our generation. Even if LA beat us (which considering the circumstances wouldn't be that bad), you can at least say you saw Landon Donovan on the bench.

So, our first ever defense of the Lamar Hunt trophy faces it's first real test (Portland wasn't really a test, just a long exercise). Do we stand a chance? Of course. Is it going to be easy? Nope.