Worse Losses than Ljungberg OR: She's (Temporarily) BACK!

Share All sharing options for: Worse Losses than Ljungberg OR: She's (Temporarily) BACK!

(WARNING: This is a Freddie Ljungberg post that does NOT contain underwear. You're welcome. Or apologies. Whichever applies. But you may not be so lucky in the post-game.)

Hey, Offsiders. As Denny said in his last post, he's off gallivanting around the world, so I'm temporarily back to keep the cobwebs from accumulating in Seattle Offside in his absence.

Was going to do a long post about the CCL game, the refereeing, the lack of that certain Sounders je ne sais quoi, etc. but I'm completely out of practice posting and I didn't get around to it in time and all of a sudden there's this new game to think about? Something about some bald guy coming back to town and whether we should cheer or boo?

(My thoughts: I'll cheer when they announce his name before the game. After that, he becomes just another traffic cone for our players to dodge on their way to glory.)

In reality, I wish him well, as long as "well" doesn't mean "finishing ahead of Sounders in the final MLS standings."

But...he's not our Freddie anymore, and to be honest I don't really miss him. In fact, yesterday on Twitter I was coming up with long lists of things I actually miss more than Freddie. Among them: 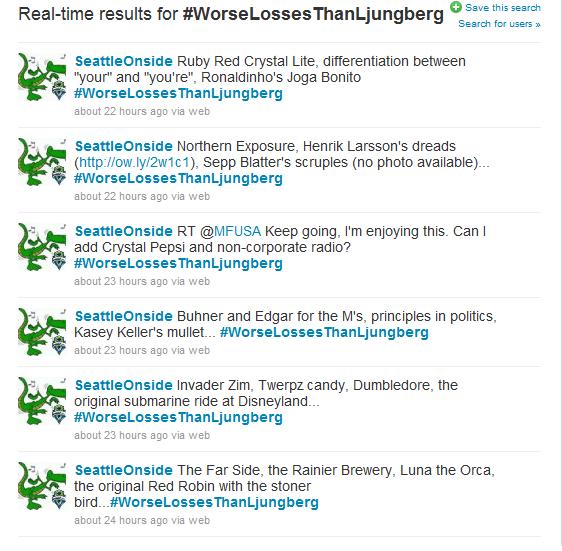 (The link on the Henrik Larsson thing goes here. Perhaps this makes up for the complete lack of Underwear Model Freddie in this post?)

So, yeah, Freddie, thanks for everything. Welcome back, good luck to a degree, etc.

Now if only I had some Twerpz.