Fredy Montero: Putting the 'Artist' Back in 'Trequartista'

Share All sharing options for: Fredy Montero: Putting the 'Artist' Back in 'Trequartista'

I was inspired to write on Montero by Kirsten's post on Seattle regional. Thankfully, we can go into a little more depth on tactics and formations here, so I can build off what she's already written.

It's funny how fast things can change. Barely four months ago, Sounders fans were calling for Fredy Montero's head, and now we're all writing him love notes. So what's changed? It certainly appears that he's playing with more passion, more fire, but those are weak explanations used to deflect questions rather than attempt to answer them. Montero is probably a little fitter, yes, but hard work and improved stamina alone do not explain the amazing transformation we've seen from the 23 year-old Colombian, who has metamorphosed into a leading league MVP candidate despite spending the entire first half doing more or less nothing.

July 11th was the turnaround point for the team's season. In the three games prior to the 1-1 draw against FC Dallas, the Seattle Sounders had managed to lose to DC United at home and then to the Philadelphia Union and Los Angeles Galaxy away. Since, they have secured seventeen out of twenty-one possible points in MLS play, and they did it while playing beautiful, fluid football. Montero was at the centre of it all.

What else happened on July 11th? A certain highly-paid player who had featured prominently for Seattle was dropped from the lineup - for good. In his absence, Montero has taken on the role of creative attacker along with his habit of poaching goals, inserting himself into the very middle of all the Sounders' best moves. It's hard to dispute the evidence here; no sooner was the other player off the field than Fredy was on fire.

How he has managed to play so well without Freddie Ljungberg is unclear. While a fiery personality, Ljungberg's eye for the clever pass or nose for a defence-splitting run were unmatched in MLS for the vast majority of his time in Seattle, and there can be little doubt that those skills would have been well utilised by Montero in his new role as creator. Fortunately, Ljungberg is not the overpriced anchor whose dismissal proved the catalyst for Fredy's renaissance. That honour falls to none other than Pat Noonan.

Why would I assert such a thing? Well, there's much stronger evidence here than with Freddie. Let's look at the typical formation with Noonan on the team: 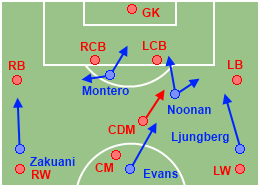 Figure 1: Sounder attack with Montero and Noonan as forwards.

Here we see Montero in the typical striker position for Seattle. High up the pitch, relatively little lateral/vertical movement, stuck between two central defenders. Meanwhile Noonan is slightly withdrawn, acting as a support striker. Typically a full-back or a central midfielder is able to pick him up. 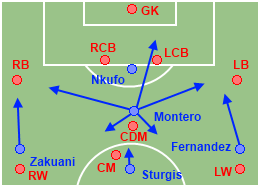 Figure 2: Sounder attack with Nfuko/Jaqua and Montero as forwards.

It doesn't matter which of Nate Jaqua or Blaise Nkufo is playing; they're almost always utilised in the same position Fredy occupied with Noonan on the field. Meanwhile Montero drops deeper into the hole between the opposition defence and the midfield, the play-making position most commonly known as the trequartista.

Why does this matter?

Montero's skillset is built around technical ability rather than strength or speed. He's fast enough for a striker, but no burner, and he's incredibly strong for his size, but neither of those traits would distinguish Fredy from anybody else in the crowd. What he does possess is incredible ball control, the ability to read defenders - and by extension defences - and the capability to score with either foot or his head.

When played up top on his own, Montero is under immediate pressure when he receives the ball, from both centre-backs. If Fredy's lucky, he'll win the aerial battle to bring the ball down and get it under control, but as soon as he has the ball there's usually no way through both players at once, and the ball has to be played backwards. An attempt to beat the nearest defender will result in the ball being exposed for his partner to steal - dribbling through players is much easier when they're spaced out. He's not totally ineffective as the centre forward, but when the most talented player on the team is at his most dangerous from set pieces, something is slightly wrong.

With Noonan no longer pushing Fredy to the point of the attack, Montero can sit deeper. In fact, he plays deeper than Noonan ever did and routinely wanders all over the pitch looking to pick up and distribute the ball. Leaving just one man to take on Fredy in the gap between the midfielders and the defence is slightly pointless, as Montero then has enough space to run at him or pass around him. Remember that at least one centre back must cover Jaqua or Nkufo, meaning that in order to follow Montero with the two players needed to shackle him, both a central defender and a central defensive midfielder must be tasked to follow him. And when that happens, Montero can simply drag his marks to a wing and let his teammates flood into the gap created in the middle.

This makes Montero's current position as a trequartista extremely difficult to deal with, and the way he's playing - popping up everywhere on the field, confounding defences to set up his teammates as often as he's scoring himself - is the hallmark of some of the game's greats. Diego Maradona favoured the role, so too did the Italian greats Roberto Baggio and Gianfranco Zola. Where they differ from traditional withdrawn strikers is their ability to bring the rest of the team into the game, conducting attacks rather than simply finishing them. Is there any doubt that Montero, right now, is the creative hub of everything the team does, that he's the foremost artist on the field? His ability to take on the central attacking midfield role as well as that of a support striker lets Nathan Sturgis focus on being more of an annoying midfield terrier and less of a tactical, intelligent passer, playing neatly into Sturgis's strengths.

With the advent of elite midfield destroyers such as Claude Makalele in the early 2000s, the trequartista was man-marked out of existence in most European leagues. Now the role is being revived in Seattle, giving Montero the opportunity to show off his dazzling skills. The removal of Noonan and the restoration of a target man to the Sounder lineup has allowed Seattle to find the position that uses their Colombian wonder-kid to his fullest potential, and the result has been very sweet indeed - enough to turn a figure of disdain into the heart and soul of the team.