Share All sharing options for: The Blow to Ozzie's Manparts and all the Other Things I Should've Been Blogging About

Wow, this two-game-a-week schedule really doesn't leave much time for being lazy, does it? (Damn.) So let's just jump right in and talk about all the stuff I should have been blogging about all along. 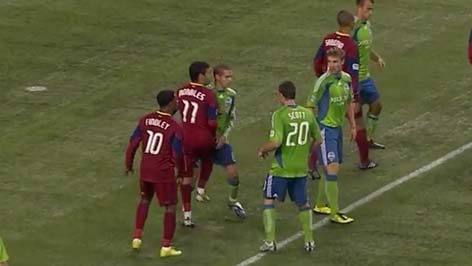 That was just the question asked -- and answered -- by MLS. Referee Paul Ward missed it during the game, but the folks at MLS did not. Morales has now been given what amounts to a retroactive red card. He's been suspended for a game and fined $250.

(Yes, they did just hand out punishment based on...brace yourself...video review. See, FIFA? Was that so hard?)

I guess I'm glad that Morales has been punished, but this hardly seems fair. If Ward had caught it during the game, Sounders would have played fifty minutes a man up and had a slightly better chance to break RSL's happy-with-the-draw deadlock. As it is, who benefits? RSL's next opponent, who just happen to be our rival for one of the last playoff spots: Chicago Fire.

Oh, speaking of "happy with the draw RLS," this photo is awesome. (It apparently comes from randomnesspersonified.com?) 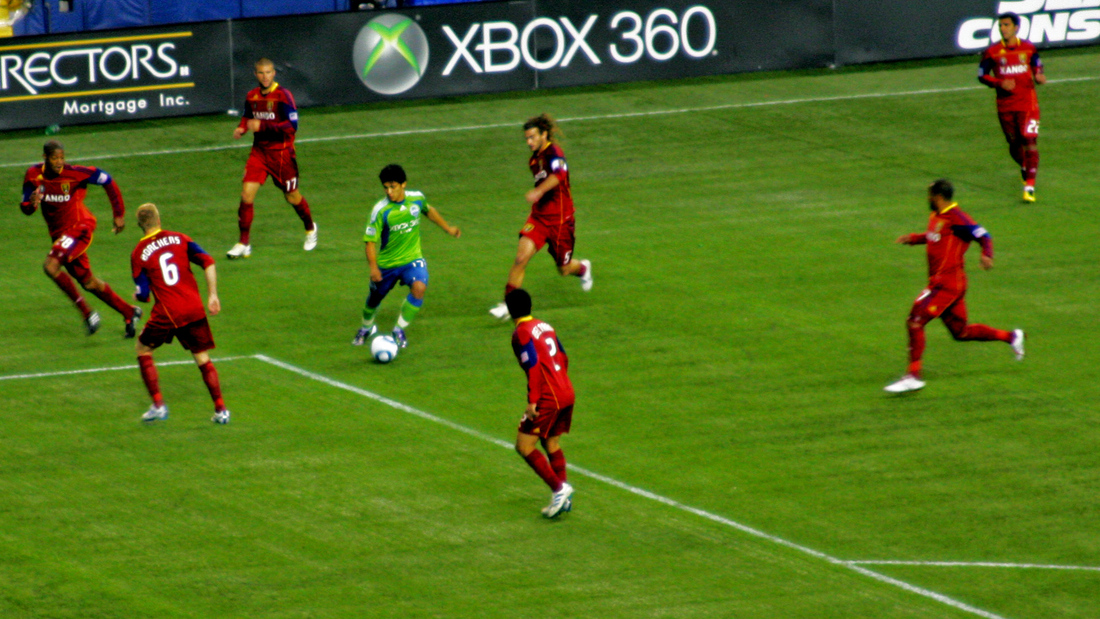 Back to refereeing stuff, after my own video review, the penalty call on Jeff Parke was entirely legit. He screwed up and tripped Findley in the penalty area. Dear Paul Ward, please forgive me for all of the really, really bad words I said about you at that point in the game.

(The ones I said when you missed the Morales red and called game when Zakuani was on a breakaway, however? Those still stand.)

And speaking of the penalty, was Kasey Keller absolutely masterful in psyching out Robbie Findley or what? Those who are saying Kasey's past it need to pay a little closer attention. Is all I'm saying. In my opinion, the guy has earned the right to play in 2011 when Portland joins the league.

Last random note from the RSL game: Patrick Ianni really has an incredible sense of where an airborne ball is going to end up. When he's having an on game, his ability to win headers is nothing short of amazing.

Now if only he could learn to direct those headers to the guys in rave green, he'd be...he'd be...

Oh, right. He'd be playing in a league other than MLS.

Okay, Saprissa tonight, away in Costa Rica. I have little hope, but they have surprised me before. My big wish is that nobody gets broken going into the weekend. (I'd almost rather see some of our most important starters rested. Just in case. Oh, and speaking of, Blaise didn't make the trip.)

For fun in prep for the game, though, SoundersFC.com has a video where Leo Gonzalez gets to talk about playing at home, and Fredy Montero gives an interview. In English. (Well done, Fredy!)

P.S. Contratulations to Alvaro Fernandez on the birth of his son, Valentino!