I'm Back, WE'RE Back

Share All sharing options for: I'm Back, WE'RE Back

The Sounders that we know and love are back. All of them.

The team's epic domestic road form is back, the World Cup star we had been expecting all along is back, and bulldog Mike Fucito is back to heroically steer us to our first ever international win.

Well, it wasn't entirely international, but the club's first ever Champions League points are every bit as sweet at home as they are away.

Cause there really is nothing like home, sweet home.

Now, before you all turn and split for the doors, let me just say that I am also back, and it feels good to be back in Seattle. I had one of those trips that when I got back, it really just felt like I had been gone for too long. Lots of interesting things happened while I was away, but I was able to keep up thanks to Laurie. So, please give it up for the fantastic Laurie who graciously filled in for me.

While you're at it, tell her to stay. I've been trying to convince her, but hey, you guys (and gals) seem to have a special way with her maternal area. But you'd be doing me a favor too.

Anyways, now that I am back, I'll be sure to get back on my horse and catch up with all the news-news and going-on's. There's all sorts of stuff, from USOC showdowns to new CEO's. I'll get innit.

But first, something neat.

I was in Beijing, China, visiting my Dad who's been working there for the past year and a half. The first time I went there a year ago, I spotted this Irish pub down the street from my Dad's house run by an ex-pat. It was a true soccer pub, and there were scarves, banners, and kits from all over the world hung up on walls and ceilings. So this time, I came prepared.

How's that! The odd frame kind of blocks some of it, but it's still a good sight.

I got the bartender to hang it up right away and pose for a picture, but I guess someone else beat me to it. Beijing had already been scarved! First one to find the other Sounders scarf gets kudos from me. 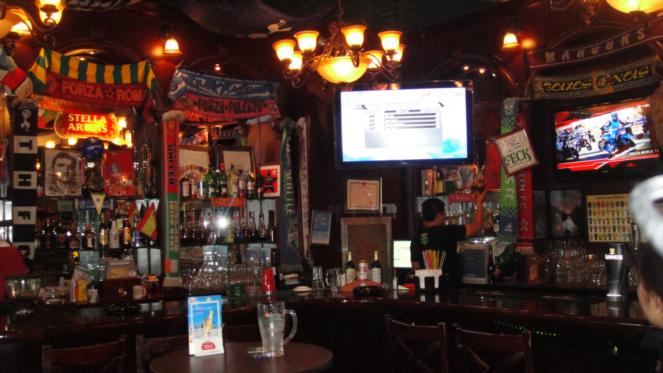 Let's get back to those playoffs.