Share All sharing options for: 15 Questions with Michael Seamon 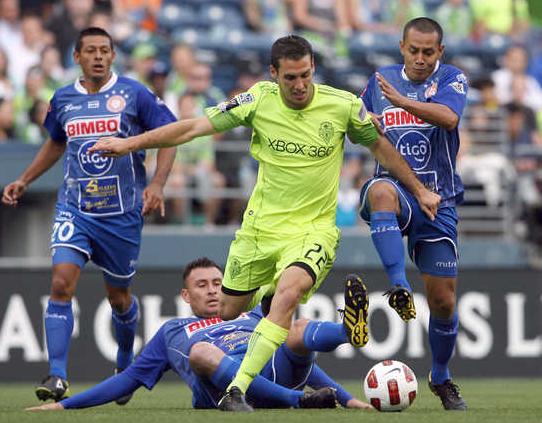 After yesterday's draft day events, we were all looking for immediate reactions from coaches and staff on the five draft selections, especially as the picks were surprising and we knew very little about our new Sounders draftees. However, one of SeattleOffside's most diligent readers caught on to the Sounders players' reactions. Seattle's Sophomore Midfielder, and one of my personal favorites, Michael Seamon is one Sounder who can relate to the excitement of Draft Day. But as it turns out, Seamon also has some insider knowledge and advanced scouting on one of our draft picks.

Check out the short interview below.

1. How do you know Bryan Meredith, and how well?

I've know Bryan since we were younger in youth soccer. A couple of summers ago we played for the same summer league team, and would carpool to games together and became really good friends. We also live about 10 minutes down the road from eachother.

Definitely a 10. This is the first person that I know pretty well that will be living out here, so it is exciting for me to have someone who I am already friendly with.

3. So who will be responsible for hazing him and the other draftees, and is that a responsibility that you would like to personally take on?

I don't do any hazing. I guess a prank could be in order. I am not in charge but would love to pull off some sort of prank on them.

4. Did you ever play against each other when you were younger, and who would win between the two of you?

We did play against each other at least once in a spring scrimmage for college. I think they beat us, but the game wasn't official, so it didn't count. Otherwise we just played on the same team that one summer.

5. Does he have any siblings?

Yes he has a sister.

6. What kind of car did he drive in highschool/college?

I think a Volvo.

7. How well do you expect him to fit in with the rest of the team?

He will fit in great. He is an easy going guy who is respectful and the older guys will appreciate that.

8. What is your favorite memory of/with him?

A car ride we had up to Maine for regionals. It was the two of us, his parents, and two other teammates. A lot of inside jokes came out of that car ride and the whole weekend.

9. How nervous do think he is right now?

I don't think he is too nervous. He is a pretty confident guy who played for a highly ranked college team and also trained with the Red Bulls at times, so it shouldnt be too much of an adjustment. The only thing he might be nervous about would be moving across the country, but hopefully I will be able to help him with that.

10. Where will he sit on the team bus/plane flights?

No specific seats on the bus/plane. The only place he won't be is in first class on the planes. Sometimes we get a few upgraded tickets, but it usually will be the oldest guys who get those seats. So he willl be in coach with me.

12. In the box, is he a screamer or the silent-type? Kasey Keller or Petr Cech?

Neither. He is very confident and controls the box well. He doesnt scream but does do a lot of talking to make sure the team is in their proper positions.

13. What does he like more, penalty saves or clean sheets?

14. If he needed a place to stay, would you lend him your couch to sleep on?

There is a 99.999% chance he will be my roommate. So he would have his own bed in the apartment.

15. Lastly, do you have one piece of advice for Bryan and the rest of the draftees before they come to Seattle?

Just be open minded to what the coaches have to say. They are coaching at the highest level for a reason and can see aspects of your game that yourself and other coaches have never been able to see.

A special thanks to Mike for taking the time to answer these questions!