Ladies and gentlemen, we are in the prime continuum of space and time where both the MLS off-season and the January European transfer window align perfectly like a lunar eclipse, which then blocks out all light of logic and things that you normally wouldn't say or do.

There's a shirtless picture of Diego Forlan after the jump.

Honestly, agents and players say the darnedest things. Like the moment Uruguay legend Diego Forlan said that he would one day like to play in MLS, specifically for the Seattle Sounders, the rumor mill started churning and now it is being said that Seattle might actually want him.

Which is why I drew this picture. What? I'm an artist! I can't control what happens when you give me a picture of shirtless Forlan and MS Paint. And exactly 2.36 minutes. 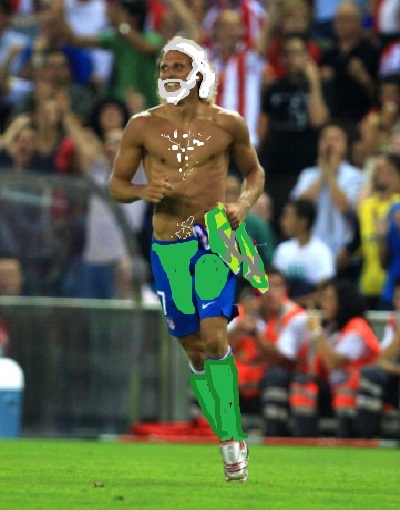 Allow me to point out the finer details in this beautiful image, of Forlan's flowing golden blonde locks replaced with dry, knotty white hair, and a neckbeard that shows his wizened sage-ness, and the tech-fit straps on the Sounders shirt he is grasping in celebration. I also added a snow white treasure trail, because really, he is still golden.

Honestly, I find it kind of humbling that Forlan would like to associate with us. But it's not as surprising, as I pointed out, there's only a handful of days left before such topics are barred. Like the fact that Robbie Savage, the other (less successful and more violent) Golden Boy apparently would also like to play in MLS, but at a step down in Vancouver. Even more wildly so, his club Derby County have agreed to let him walk on a free at the end of the season. So does that mean Vancouver have some sort of under the table contract agreement until he joins in mid-June? I don't know. I'm too busy watching this "Best Hits" compilation video of all of his greatest plays.

But by far the best bit of eerie astrological imbalance (by the way, I'm still a Gemini, in case you were wondering), is the freaking fantastic announcement that Eric Cantona, the King of Manchester, is making his way into MLS. Not as a player, but as a the director of the defunct-but-not-dead New York Cosmos.

It's kind of ridiculous just how ridiculous the whole thing is. If you click here to go to the NY Cosmos website, you get a video of Cantona smoking a cigar. How that will help the bid for a second New York expansion team, I don't really know. But, did you know that the current Cosmos president is Pele?

Anyways, all this space-time warping stuff with rumors and big star names might actually elevate MLS to new heights. However, I think Cantona and Pele have a long way to go before they can restore the Cosmos back to fame.

Wait, those are the NY Cosmos right? I hope someone told Cantona.