Share All sharing options for: Om nom nom, and rainbows

I awoke today in a blurry and fuzzy haze. Immediately, I had a primal hankering that could not be satiated. But then, stumbling around somewhere in Ravenna, I found it. The Holy Grail. Rain City Burgers. 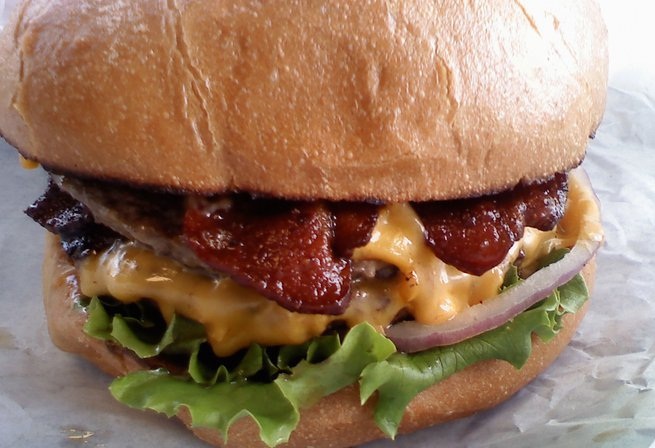 Actually, I found it over on Dave's page, but I'm not lying when I said I was hungry. That picture certainly isn't helping.

The crazy thing is I used to go to this tiny little burger shop when it was called Primo Burger. I wasn't aware that it was renamed recently, possibly bought by new owners, but I haven't been there since my freshman year foot wanderings north of UW. They did have delicious teriyaki burgers and shakes, but I am excited to try their new fare and the aptly named Sounders Burger. Grilled jalapenos and garlic, cream cheese, and bacon, all on top of pepperjack. Um, hey, Sounders Burger. Kindly place yourself in my belly.

Not trying to turn this into a Yelp page (cmon, we all use Urbanspoon anyways), but I will definitely be hitting the place up to continue my Sounders hunger after imbibing and inebriating at the conveniently located Atlantic Crossing a block up the street. Ravenna, you are now my favorite match-day neighborhood.

In other web gem discoveries, I nabbed this off of the Toronto.Offside page. It's a YouTube video that went viral, starring the Cal men's soccer team on a road trip from UW to OSU. I then proceeded to vomit rainbows before kittens as-ploded out of my head. Because it's that cute.

I spotted Revs' AJ Soares and Toronto's Omphroy, but I think a certain Sounder draftee Servando Carrasco should be in there too. I couldn't find him in time, because, well my eyeballs turned into marshmallows.

Anyways, a quick shout out to my new favorite form of soccer, Street Soccer Seattle. I'll be back later with more details, but click on that link and like their facebook page. Do it. Now.