Well That Was Quick, Forlan Rumors Back to Life or Dead Already?

Share All sharing options for: Well That Was Quick, Forlan Rumors Back to Life or Dead Already?

(of an aim or endeavor) Unlikely to succeed or be fulfilled; hopeless
"a forlorn attempt to escape" 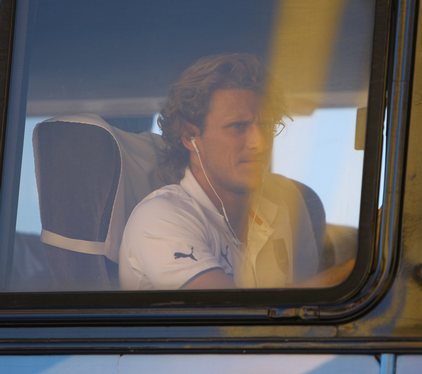 I've got one to add.

"Forlorn Forlan is stuck on the bus."

Well that was quick. In a space of days, the rumor mill burned and flashed. It's a fickle thing, the winter window.

It seems that in the past several days, the Diego Forlan to Seattle rumors took off. What started as a player quote apparently turned into a legitimate offer by Seattle. The tweets were flying all over that Spanish radio station Cadena SER were confirming a lucrative offer for Golden Balls.

However, just as quickly as they appeared, the rumors were quashed with wicked cynicism. Not that there might've actually been a serious bid, but just the sheer idea of Forlan playing in Seattle. Admittedly that includes those of us here at the Offside.

The one thing that seems notable is that Forlan might actually want out of Madrid, but not necessarily to Seattle (or at least not at this time). It could also all just be some smart rhetoric by his agent, who could be leveraging for some more money in a transfer. It should be noted that though the striker's contract runs until 2013, since he renewed in 2009 he's been very talkative about moves to England, Italy, and now MLS.

So, however attractive these rumors seem, I have no reason to believe there's actually anything behind it. It's nothing new, but more so, there hasn't been enough talk that's conclusive. Not only that, but Seattle would have to too much rearranging with the roster, though it is possible that MLS would be willing to work something out.

In any case, I'll bet you five bucks that Forlan's agent spent a good deal of time today trying to figure out how MLS allocation money and DP rules work. Sadly, he's not the only guy who might be wasting time with this.

For now I'll go back to fantasizing for the rest of the day, fingers crossed. How about you? Think MLS can somehow spin the hype into something positive?