Share All sharing options for: 12 Hours Until Open Tryouts (aka I Live My Dream and Become A Sounder) 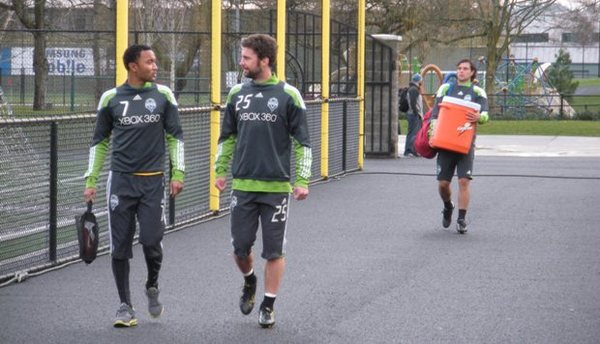 Guess who that is in the picture up above, carrying the water bucket? Well, my friends, that's rookie defender Leone Cruz.

Yup, tomorrow is the beginning of Open Tryouts for the Seattle Sounders. And I'm scared sh**less.

So you wouldn't believe the monster post I had written up earlier this week, but just never quite got around to publishing. It's mostly because I'm up to my brain in exams and homework, but also because I was trying to justify my absence, which then turned into waxing romantic about my childhood dream to become a professional soccer player for the Sounders. Yeah, I'll not.

I know I promised you guys a while back that I would have updates of the whole process of preparing for the tryouts and a look into the mental mindset of a bloke compulsive enough to throw away $125 at a once-in-a-lifetime chance at a dream. The excuse, like I said, is that I've been swamped with school this quarter, and my mama raised me to always put "school first before silly games". That's not to say I haven't been training. I've been running for a month, playing hours of intense pickup every weekend, and doing my own trainings and workouts, but alas, I'm afraid that it might not be enough to have me fully fit in time. Because of that, now my primary plan is just to hit the ground like a hyperactive puppy and just make up for the physical difference with heart and tenacity.

So instead, the best I can promise you is a good review of what exactly open tryouts for a professional soccer team arereally like. I somehow convinced my girlfriend to come with me tomorrow morning to take pictures and offer emotional support. Which, now that I think about it... may not have been such a good idea. Yeah, after watching me flail about miserably on the field, I'm pretty sure she's never going to believe the fact that I've ever actually played soccer.

Anyways, wish me luck tomorrow and Sunday, if I make the call back to Sunday, and I'll be back hopefully with a positive experience to share. If not, I'll at least try to sneak away with something cool.