Sigi Schmid's side lacked its best three technical and creative force in the game Saturday night. Forced to use the natural central midfielders (Brad Evans and Erik Friberg) at the same time and deploying Pat Noonan as a withdrawn man the Seattle Sounders did not threaten the Philadelphia Union goal as they typically do. Only 5 threatening attempts occurred (2 shots on goal, 3 blocked shots) and while there were a few misfirings by players in the box, the larger issue was a lack of creation of opportunities inside the 18.

Evans and Friberg split time in central and right central positions, but they lacked the width that a Mauro Rosales can create on that side. When either was on the right it was more like an Alvaro Fernandez, but neither have the passing or dribbling skills and so many of their passes were of a safer square variety or drop backs to Osvaldo Alonso or James Riley.

Noonan in the space of Fredy Montero was a like-for-like concept. Of the options available he was the best medium length passer and ball controller. Ideally he would do like Montero feeding diagonally to create for his teammates. Lacking the speed of Montero the quick give-and-gos would be less likely to succeed. 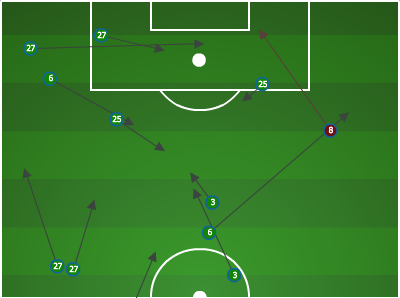 This limited look at the 5 ball controlling players (Noonan, Neagle, Friberg, Evans and Alsonso) shows the flick-ons, throughballs and key passes in the attacking half of the field. Since Seattle didn't have a tall ball-winning man in the starting lineup the nature of the crosses prevented that from being a threat as well. The high lofted balls might work with men like Nate Jaqua or Sammy Ochoa, but with Mike Fucito being the only high man the crosses needed to be much tighter, lower. Since almost all of the crosses came from the right, there may have been some latent looking for a player to behave as Fernandez has lurking off the left post.

Unlike the game against the Chicago Fire, there was much less direct play to space for Lamar Neagle or Mike Fucito, and in this game Brad Evans to run onto. The attacking options were limited,. In these circumstances it seems as if the gameplan was made to keep the game as most like a typical Seattle attack then custom designed for the game being played.

The failures at finishing will be most noted. But when forwards only get three trackable offensive actions within the penalty area focusing on finishing misses that the team didn't create opportunities as typical. Against Fire there were about a dozen opportunities for forwards. Against the Revolution that number was again nearly a dozen.

Seattle can play a strong game and beat playoff caliber teams missing some of the creative players, but lacking the top three caused shifts in behavior without major shifts in tactics that meant the goal dangerous players were midfielders in forward space rather than the men who should be threatening in an ideal world.