Share All sharing options for: Sounders on Campus: Week 8

Bit of a break since our last update, but Sounders Academy players continue to make their mark as Freshmen across the collegiate soccer landscape. We're now at about the 2/3rds point of the season for most programs, so we're seeing teams starting to make their final push for conference and national tournaments. The story of this stretch is the performance of keeper Rodney Greiling after being promoted to the starting roster.

The Zips suffered their first loss of the season in a nationally televised match at the home of the UC Santa Barbara Gauchos, which also happens to be the field where Akron won their national championship last season. It was a high-octane match with plenty of early chances at both ends and plenty of shots hitting the woodwork, but UCSB found a winning goal early in the first overtime. With the match on Fox Soccer Channel, it gave us a chance to watch Yedlin live and see some things that don't show up in box scores, recaps, or highlights. In particular, he was involved in allowing both of the Gauchos' regulation time goals. For the first he helped double team a forward when a cross was coming in from the right corner, but the cross actually went to a late runner who was left wide open 8 yards in front of the net to easily knock it in. It's always hard to know where the defensive responsibilities are (maybe another defender was supposed to track that runner back), but DeAndre was the closest defender to the shooter and probably should have been putting pressure on him. On the second goal, the cross came in from his wing after the attacker got around the Freshman. We've seen through the course of the season that Yedlin's making an impact offensively, and obviously Caleb Porter has enough confidence in him to play him nearly every minute of the season at fullback, so perhaps this game was just an outlier.

The Zips' other 4 matches since the last update were all shutout victories and they return to the national #4 ranking they had when last we checked. This week features games at Michigan and Buffalo and then only four more matches remain before the MAC Tournament and presumably a return to the NCAA Tournament.

Duke rebounded from an awful start of the season to retake a place in the Top 25 rankings in the last month. But the last few weeks saw a very difficult stretch with two of their four matches being against North Carolina and Maryland — the 2nd and 3rd ranked teams in the latest NSCAA poll. The Blue Devils managed a draw against UNC (on Fox Soccer Channel) but lost to Maryland 4-2. With wins in their other two matches, they're now the first team out of the Top 25 behind Cornell and 3rd in the standings in a very tough ACC. Nick started all four games, scored the first goal in the draw against North Carolina, and had an assist in a blowout win over NC State. 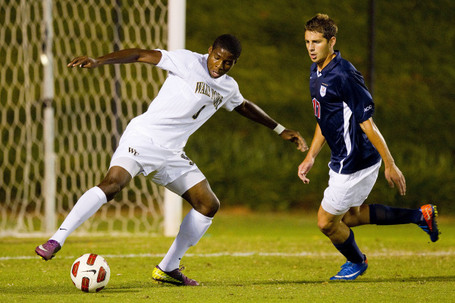 Wake Forest lost at then 16th ranked Boston College, but earned 2 wins and a draw in their other three and continue to hover in the middle of the tough ACC. Their match against College of Charleston was nationally televised on Fox Soccer Channel and featured two Sounders Academy starters with Okoli starting for the Deacons and Troy Peterson starting for Charleston. Unfortunately, that game ended as a 0-0 draw, but it continued the trend that now has Okoli starting in 7 straight matches after spending the early season on the bench. And in the last match — a 4-3 win against Virginia — Okoli earned a penalty that became the Deacon's first goal and assisted the eventual game-winning goal in the 89th minute. Hopefully that production will keep the Freshman forward locked into a starting role.

After a strong early start to the season the Cougars' season has gone off the rails and they're without a win in their last 5 matches. Two of those games were tough ACC matchups in which they earned a draw with Wake Forest (as mentioned above) and then lost at #2 North Carolina. But Troy has continued with his consistent production from the midfield in every match. He started in all five and scored three goals in that stretch, including one against North Carolina. He now has 6 goals on the season — tied for the team lead — and has done it on only 15 shots, bolstering his reputation as a dangerous attacking threat out of the central midfield.

The Beavers have suffered through their own rough stretch over the last few weeks, during which they faced four nationally ranked teams in a row. After a home upset win over the ranked Washington Huskies (boo), Oregon State went winless in their next four. Paden had some substitute minutes in the most recent match against California, but otherwise neither he nor Brockway were on the field.

There's a new addition to the active list! After spending the first half of the season on the bench, Rodney Greiling got his first start in net against 21st ranked Kentucky and made 6 saves en route to a shutout upset victory. Then after another start in a loss to Memphis, Greiling secured another six saves in a shutout draw with 6th ranked Central Florida. So two shutouts of ranked opponents in three matches. You know, no biggie. Greiling has now started four matches in a row and apparently has taken over the starting duties as a Freshman.

Thanks to a succession of three draws the once unstoppable Barry were on a four game winless streak, but they came back to win their last two and remain the 11th ranked team in Division 2. Hanson started all 5 and is clearly a fixture in the Barry midfield.

The Broncos started a dense stretch of six games with big wins over Gonzaga and Portland, but then went cold and lost their last four without scoring a single goal. Kevin Klasila continued to start ahead of Herman, though in the last match Junior keeper Larry Jackson (who was at one time a US youth national team player) took over in net.

The Huskies started off conference play poorly with consecutive losses to Oregon State and UCLA, but recovered to win three in a row to put them back at a #23 ranking. Drew continues to wait for his chance and at this point in the season, we're almost certainly looking at next year.

I've been remiss in not keeping on eye on defender Nate Boatright. I had my wires crossed on which Concordia University he's playing for (Portland, not Irvine) and hadn't seen any stats for him. It doesn't help that both Concordias are NAIA powerhouses. But now I'll catch up by pointing out that Nate has been used mainly as a substitute on a very strong Cavaliers squad, but he's played 132 minutes and has managed to pick up a goal and two assists (mostly on corners). Concordia is 12-1 on the season and is currently ranked 13th in the NAIA.

Yordan Rivera picked up two assists for Ancilla College in their four matches. Seattle Pacific went 3-1-1 in their five matches and is now up to 20th in the Division 2 rankings. Evan Robicheau started in every match for the Falcons, who play four of their final five matches at home.

Darwin Jones is tearing up the NWAACC. He picked up 5 goals and as assist for Highline in their last four matches — all of them wins. He now has 10 goals and is third in the NWAACC scoring table (though he's well behind leader Miguel Gonzalez with 26(!)). Shoreline managed to pick up their first win of the season but lost their other three matches. Jeremy Wentzel hasn't shown up on the limited NWAACC box scores, so I'm not sure if he's not playing or just not picking up goals or cautions.