In soccer, offense comes down to creating opportunities, taking chances and converting those into goals. There are times when a great keeper, the post or some defenders can get in the way of those goals, but it does not minimize the offense. There has been the question of a third DP, a "consistent" scorer, but against the Chicago Fire the Seattle Sounders showed that goal danger doesn't need a big name. Today Sigi Schmid talked about what he said to the team prior to the game.

Coach Schmid is confident in the ability of the team to score goals. He doesn't know which players are going to score, but he knows that someone will. The offense has been diverse all season. Even when they aren't scoring there is a constant pressure on the opposing defense. In no game was this more clear than the win in the US Open Cup Final. 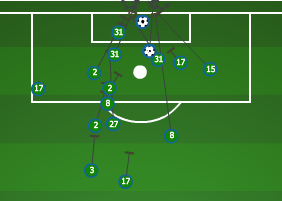 Mike Fucito and Fredy Montero both flooded the Fire with danger. The pressure created had to have influence on the eventual result. Just because one of those guys didn't score does not mean he had a poor game. While scoring is the ultimate measure of the forward. Creating danger is the first.

Fucito thinks that on a different day he probably gets a goal, maybe more, but also credits the defense of the Fire and their ability to put themselves in the way.

Their two centerbacks have some pretty long legs and were able to get some blocks in. There was that one stint where we were just peppering them but they kept blocking shots. Sometimes it's a little bit of luck, look at Fredy's shot at Vancouver and it gets a nice deflection. That happens sometimes.

When asked about how a forward decides to volley, one-touch, take more, it just comes down to who that person is and their experiences.

Most of all, there was no disappointment about the lack of personal accomplishment, but a confidence in the team and pride in its accomplishments. Winning the US Open Cup for a third straight year was just another step on a journey for the team.

It was a fun night, great win, great achievement. Now we accomplished that goal and it's time to move on and get good rhythm and good form going into the Playoffs.

The Sounders are 12-2-2 (30 Goals For, 12 Against) since August with 3 MLS games and 1 CCL game left prior to the Playoffs. They are clearly capable of scoring goals and are clearly a potent and dangerous offense.