This report is from blogger/coach Tom Legg ( @tomlegg on twitter) who writes over at Eastern Promise. Though based in the UK he regularly visits East Africa and his passion for the game there is apparent. If you're on twitter you noticed a few retweets that showed that he followed the tourney. He and I have also talked over email a bit about Mrisho Ngassa, Tanzanian league play and Seattle's ambitions over there. Since at one point Ngassa was expected to be back in town for training camp with the Seattle Sounders I asked for this report.

Here's Tom's bio from his site;

And here's what Jonathan Wilson recently said about Legg;

Finally what Tom shared from his observations of host Tanzania in the CECAFA.

The Kilimanjaro Stars that shone the brightest

Tanzania's collective performance at the recent CECAFA Cup was by no means sparkling. The squad was predominantly made up of players from the Tanzanian Premier League (TPL), with the exception of TP Mazembe strikers Mbwana Samata and Thomas Ulimwengu.

A win and two losses in the group stage left the tournament hosts third in Group A, but they managed to scrape through to the knock-out round by virtue of a 89th minute Mwinyi Kazimoto goal against Zimbabwe which lifted the Kilimanjaro Stars ahead of Kenya in the third-place mini league.

A 1-0 win over Malawi in the Quarter-finals lifted the home fans spirits, but despite an impressive first half defensive display in the Semi-finals (see Diagram 1 for their tactical shape), they eventually succumbed to a 3-1 loss to Uganda (the eventual winner of this years tournament). 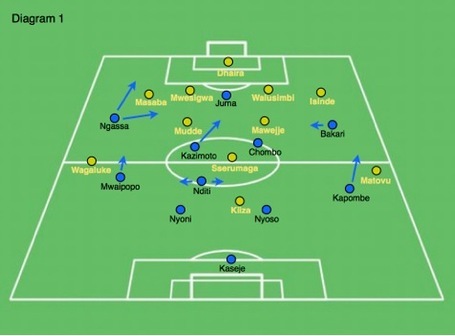 So a disappointing fourth place finish, saw the team average just one goal per game whilst conceding, on average, 1.2 goal per game.

The team's most impressive performers were all midfielders; Shabani Nditi of Mtibwa Sugar, Mwinyi Kazimoto (Simba) and Mrisho Ngassa of Azam FC (I didn't see enough of TP Mazembe strikers Mbwana Samata and Thomas Ulimwengu but both are worth a mention as players with potential).

The starting point for most of the Kilimanjaro Star's attacks was Shabani Nditi. His role in the side was to screen the back four and fill two key functions; sweep in front of the back four when the opposition were engaging Tanzania's midfield unit, and provide the back four with a short passing option if they had the space to play out from the back. Shabani movement, off the ball, therefore would tend to be lateral in covering the space in front of the defensive block.

His distribution in confined areas (in particular short passes) was instrumental in allowing Tanzania to play out from the back in a considered manner. But his most impressive skill was his awareness of opposition runners around him and his ability to close them down effectively before they could pose a threat.

He did have trouble at times knowing when to show players inside or outside, but in this instance, his athletic ability meant he could recover and allow his team to maintain their defensive shape.

As soon as Shabani received the ball in space, one player was always attempting to make himself available: the excellently named Mwinyi Kazimoto. The central midfielder finished the tournament as Tanzanian's top scorer, with two goals in five games, and was by far their most consistent performer. The Kilimanjaro's formation, when attacking, tended to be a 4-1-2-3, with Nditi holding behind midfield duo Mwinyi Kazimoto and Ramadhan Chombo.

Mwinyi's primary role was to receive short passes from Shabani before looking to make forward passes (long or short) to Mrisho Ngasa on the left wing, Nurdin Bakari on the right, or their loan striker (for the Uganda game that was Hussein Javu). Once he made those passes he was extremely effective at making quick forward runs beyond the oppositions defensive line to either create space for one of the other front three or receive the ball and create his own shooting opportunity. Mwinyi has an interesting skill set; his awareness of passing option is good, he's energetic and is a composed finisher in front of goal. He can sometime be let down by selecting the wrong type of pass to make, a sign of his eagerness to force the play.

This lack of patience becomes apparent when he's called into defensive duties. He is excellent at recovering into a defensive position, but is often keen to press and win the ball back, regardless of his team's defensive strategy. But Mwinyi is still young and this dynamic midfielder has bags of potential.

Mrisho Ngassa is a familiar name to Seattle Sounders fans after the young winger spent time with the Sounders earlier this year before returning to TPL side Azam FC. Mrisho wasn't the most consistent performer in the CECAFA Cup but his display against Uganda in the Semi-final was one of the most eye catching of the tournament. The winger is slight, stocky, skillful and lightning quick off the mark. His crossing from wide areas is good, but he's more effective cutting in on the diagonal from the left flank. He could also feasibly operate as a forward in a 4-4-2, but would need to be coached in how to work in a more central position.

Similar to Mwinyi, his defensive abilities are okay, but need improvement. His pace allows him to recover or press, depending on the system, but he tends to jump into challenges which can leave his supporting full back exposed to a 2v1 overlap.

Despite being small Mrisho speed and low centre of gravity gives him to the ability to burst past opponents in 1v1 situations. In the game against Uganda he was pushed slightly higher, on the left, than the rest of the midfield block and his pace became a real weapon on the break. Mrisho is a hugely talented prospect and, if given the right application and guidance in the future, will become a real ‘star'.