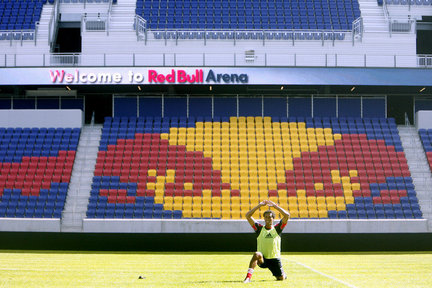 WHO: The Red Bulls
WHAT: Gameday 2, first away trip
WHERE: New Jersey side of New York
WHEN: 4:30PM, KONG 6

Injuries are hitting us again, as this time Steve Zakuani is out. His twitter and facebook confirm that he is watching the game at home and that I am a facebook stalker. Brad Evans is still a question mark, but more importantly, still Brad Evans.

Kind of a tough way to start the season, against the two top teams of each conference. New York Red Bull are on a mission this year, and a win against the Sounders will confirm that they have a stacked team capable of winning it all. A Sounders win tonight would only mean a fluke, but I think we could see some sparks on the field that might prove me wrong. A certain Fredy has a knack for finding his feet against this NYRB team. He has 4 goals in 4 games against them. Hopefully he can add to that tally.

An interesting thing will be seeing who plays today in the absence of Steve Zakuani. Alvaro Fernandez did well on the flank against Los Angeles, but seemed to be stuck in a different gear than the rest of the team as he couldn't quite mesh. However his speed and ability to open up the side will be much needed. It could get interesting if we see Brad Evans moved out there, or even Erik Friberg. New signing Mauro Rosales traveled with the team, so expect him to get some playing time. I wouldn't be surprised to see him on the left side at some point, and then slotting in behind Fredy. And of course, with no real second striker options anymore, Sigi will likely stick in OBW to start. OR, YOU KNOW, YOU COULD TRY SOMETHING THAT ISNT 4-4-2.

Seriously, anything other than O'Brian White.

NYRB are obviously a dangerous team. Their defense has some Mexican who played in Europe, but they also have some guy named Tim Ream, who I hear is pretty good, and another guy named Teemu. There's also Joel Lindpere, who surprised everyone last year by not being a complete dud. And of course, Thierry Henry.

Their biggest threat will be none of the above. Despite the attempted Euro-fication of a New York sports team by their ownership group, the scariest part of their team is in young Jamaican Dane Richards who has scorching balls of fire for feet. He reminds me of a smaller Shaun Wright-Philips. How he matches up against Leo Gonzalez will be a test of tactics and technique, not speed, for our sturdy Tico.

Sounders to Step Up: Fredy
NYRB's Who Might Have Wings: Dane Richards

Here's the report card for the pregame, courtesy of SAH.
Soccer Dave's preview
The Times' Josh weighs in
And an interesting bit from the New York Times on NYRB