Friday Partyin' with the Houston Dynamo

Share All sharing options for: Friday Partyin' with the Houston Dynamo 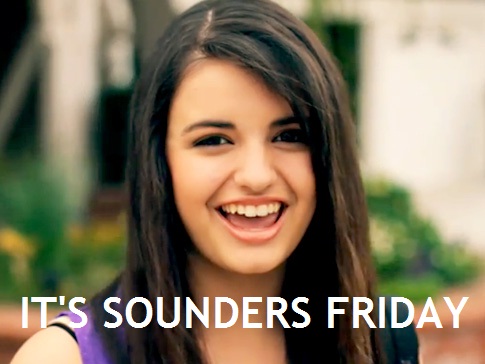 7am, waking up in the morning
Gotta be fresh, gotta go downstairs
Gotta have my bowl, gotta have cereal
Seein’ everything, the time is goin’
Tickin’ on and on, everybody’s rushin’
Gotta get down to the bus stop
Gotta catch my bus, I see my friends (My friends)

Which seat will Sigi take?

Screw that, here's a proper Friday pump-up song, whipped up by MC Ernie and DJ Bert. Click play and get previewed.

WHO: Houston Dynamo
WHAT: Friday Home Shootout
WHEN: 7:00PM, Fox Soccer, 97.3 KIRO
WHERE: Qwest/CenturyLink Field
WHY: Because someone has to get their first win

Alright boys and girls, tomorrow night we've got our first Friday night under the Qwest field lights. Or is it Century Link? I don't know, but we've got quite the weekend lined up. Formula One is back on, with the Aussie Gran Prix (if you follow that). And of course there's the international break featuring Leo Messi versus the USA at Meadowlands (for a preview of that go here). In any case, what better way to kick off this great weekend than with a spanking over the Dynamo?

Because this is a Friday evening match, be sure to don your green to work and head straight to the match (alternatively beam your kids straight there). While you're at it, bring a waterproof jacket: it's a 50% chance of spring showers tomorrow night. Those of you who aren't Good2Go yet, don't fret. Tolling hasn't started, but you'll want to leave early if you want to fight the Friday evening traffic.

To the bidniz, I highlighted the Houston Dynamo as a team to watch out for in my preseason preview, as over the summer they made the move into the Eastern Conference. That may not mean much to us, but Houston did win the MLS Cup back to back in '06 and '07. However, their team today is a far cry from those championship teams. Dominic Kinnear still drives the ship, but their club has been stalled to a standstill in the past few seasons.

Though their team has gotten younger, they still have some veteran names. Eddie Robinson, Brad Davis, and of course Brian Ching. Surprisingly, their team has FOUR Washington natives. Both Brian Ching and Cam Weaver played for the USL Sounders, so they will be getting a welcome back by the organization. Mike Chabala(lalala) is a University of Washington Husky, and he played with the Yakima Reds. And keeper Tally Hall was actually born in Sea-Tac. So waddya know. The Washington Dynamo.

The best thing about this Dynamo team is that they have a good core. Geoff Cameron, Bobby Boswell, and Andre Hainault all have a good number of seasons together, and they are about as synonymous as Orange with Ugly Shirts.

They also have several new additions that make the team interesting. In the draft, they got Kofi Sarkodie, one of my favorite draft prospects, and they moved late to eventually take Seattle's first round pick to steal Will Bruin. Not surprisingly, both have already logged minutes this season, but keep an eye out if Bruin takes to the field. That's what Seattle could have had. Lastly, the re-welcome Hunter Freeman who came back from a stint in Europe with IK Start. The Texan is solid like a bull.

"And Garber said, we shall have a test of wits."

In terms of the Sounders, not much from my end really. I am just hoping for a good, clean fight. Houston are well-rounded, and don't have any sharp or pointy ends. Their best strength comes from the top, and that's their manager Dom Kinnear. So, of course, I'd like to see Sigi see him eye-for-an-eye and out-tactics him. The pressure is on Sigi to deliver our first win. While most fans aren't too anxious right now with two losses to the two strongest teams in the league, I don't think fans will stay as forgiving for much longer. We need 3 points. And in style.

Fredy up top sounds good for starters. OBW is testing my faith, but he had tough luck facing the LA and NY defenses. Can they link up and prove to the front office that we don't need a desperation DP signing? Likewise, can newboy Mauro Rosales show that our scouts still have some semblance of knowing what they are doing? Right, repeat after me, keep the faith, keep the faith...

Sounders to Step Up: Sigi Schmid, Where Is The Passion!? It starts at the top.
Dynamos to Watch Out For: Brian Ching and Bobby Boswell, they always work hard and still manage to put on a show