Share All sharing options for: Pictures from Houston Dynamo 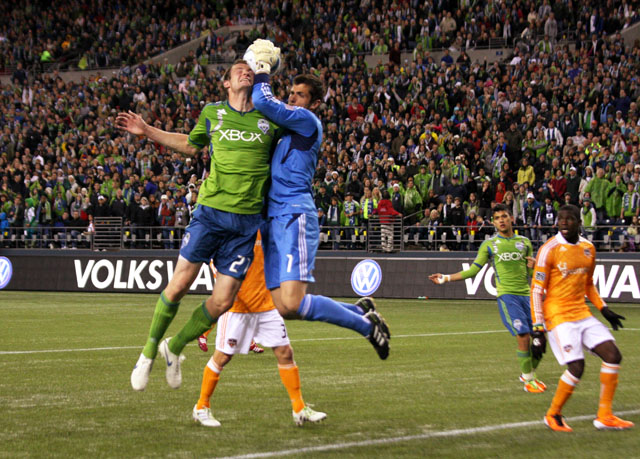 It was one of those nights, as the Houston Dynamo stuffed all of our attempts at starting off the season winning.

Earlier in the week, I was lucky enough to have bribed, I mean, convinced the Sounders PR folks to let me attend the match on a press pass. Besides being the most awesome experience EVER, I got a great chance to snap these pictures. But first, a brief recap of the game.

I hopped on the (wrong) bus (note to self: go to Fado to meet Gorilla FC next week) headed to Qwest Field around 5PM and it was filled with Sounders fans. However, in the back of the bus was an innocent and brave little couple wearing bright orange Dynamo gear and talking very excitedly. After asking them, I found out the lady of the couple was Tally Hall's sister. She must be in the drywall business, because the Gig Harbor native who would be standing in between the sticks for Houston had spent time building a brick wall in front of his net.

As soon as I got out onto the field, I promptly planted myself behind Tally Hall. Little did I know that I would be sitting behind a white fortress. I was correct in predicting that that's where most of the action would be taking place, as the Sounders were on the attack from the get-go.

In the opening exchanges, it was this guy who was causing all the trouble in the Houston defense. 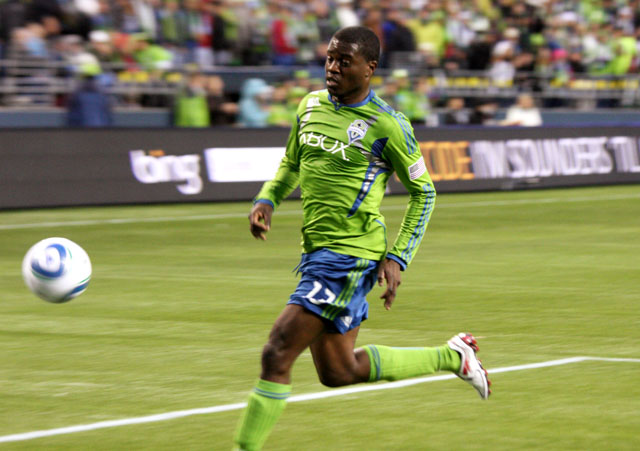 Up close and in person, O'Brian White is a monster of a physical specimen. He's fast, agile, and runs with a purpose. It was clear that he and Fredy were on a mission, as they took turns peppering the defense with jabs and kicks. 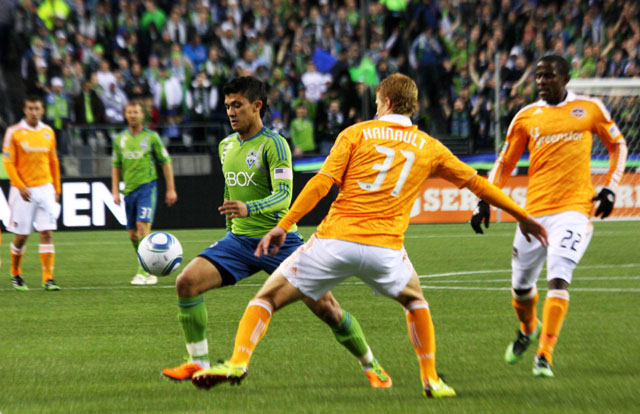 Steve Zakuani had a couple go's form the left wing. He likes to hold the ball and cut towards the center of the box. From there, he either takes his shot or goes for the dribble penetration. 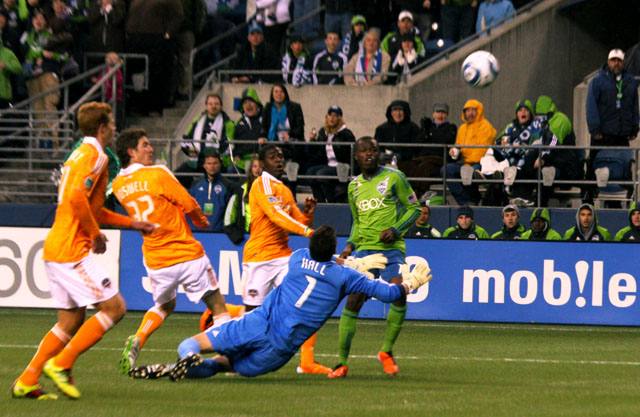 Unfortunately, the Houston defense was able to stop Steve at every step. 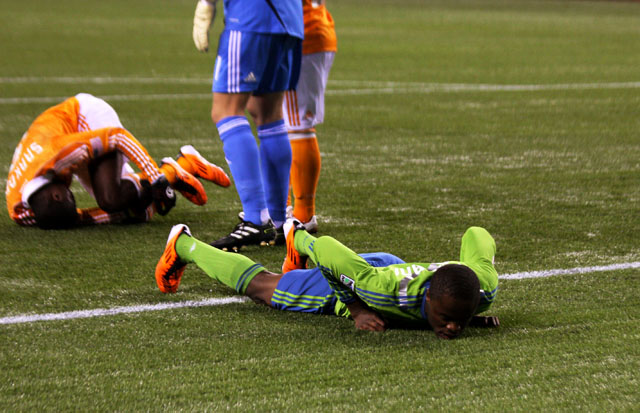 It was at this point that Houston scored their goal. Fredy not happy about wasting chances and suddenly being behind. 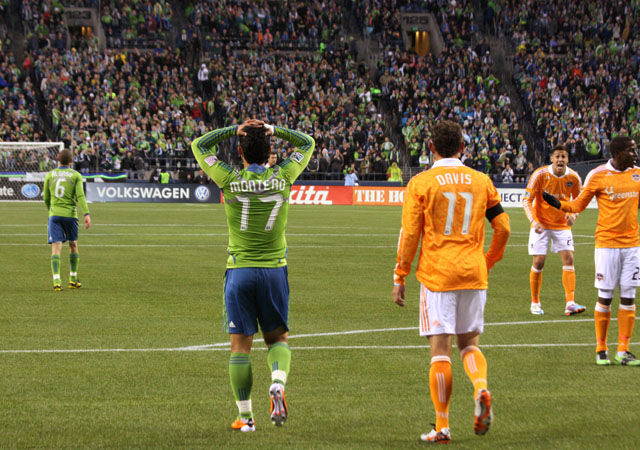 The Sounders ended the first half trailing. Not many happy faces in Qwest Field at that point, but I did manage to find one. 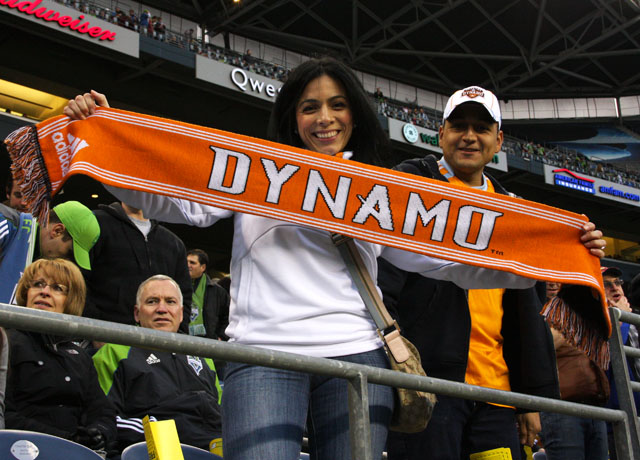 Also, the FSC crew. Eric Wynalda sitting down analyzing the half with Russell Crowe. 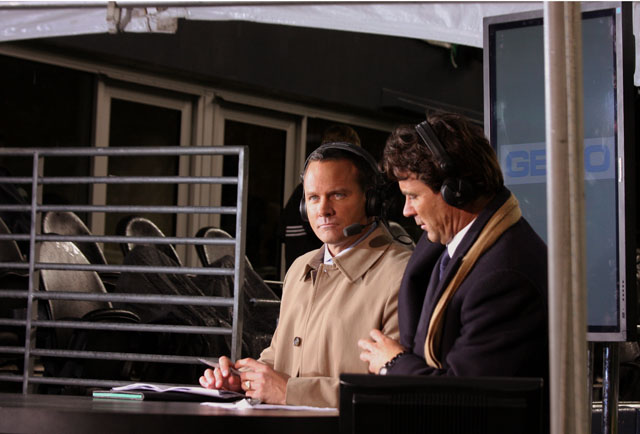 After the half, I switched sides over to the south end, and watched as the subs started warming up. I was surprised that Alvaro wasn't starting, but I guess over the past two games, it was understandable. El Flaco looking grim and determined. "Put me in the game Sigi!" 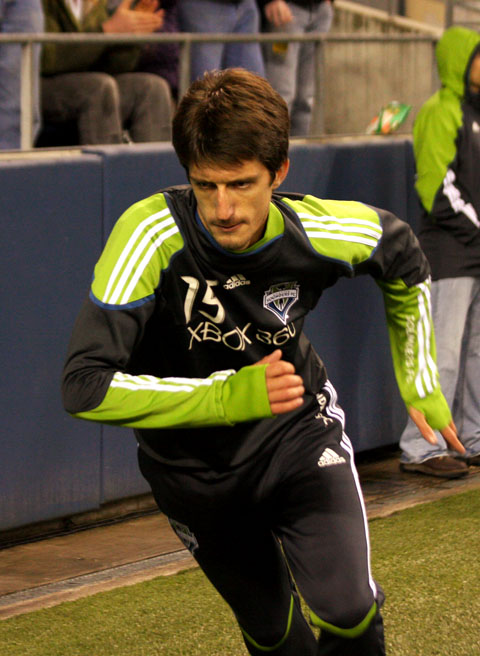 Instead Sigi decided to opt for the other South American, the Argentine Mauro Rosales. Here he is spotted doing some variation of a Tango move, which involves a half-volley. 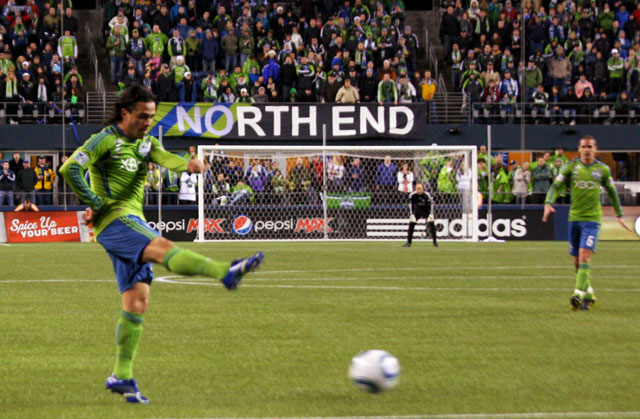 The addition of Rosales was smart. As soon as he was on the field, the entire right side of the Sounders attack opened up, with Erik Friberg combining with Rosales to give good service into the box.

I also noticed Brian Ching tracking back a lot to play defense. This was also when Houston decided to have 11 behind the line. Stay classy Dom, it's not like you're trying to please any fans.

The two dangerous forwards of the league battling it out. 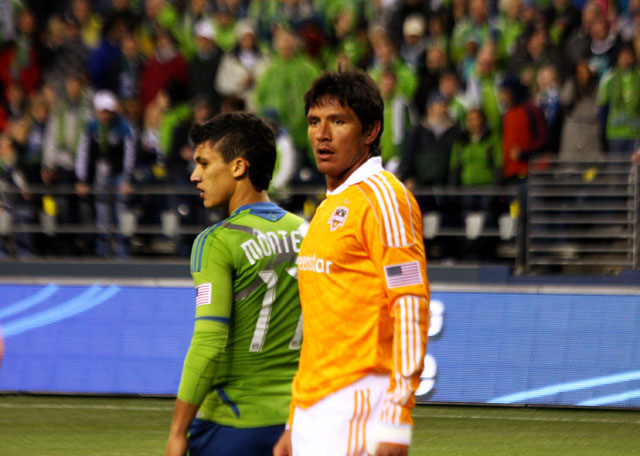 The Sounders had 26 shots on the night, but it felt like they had 26 fouls that should have been called. Fans not happy at all with the ref. "Who's your father referee?" 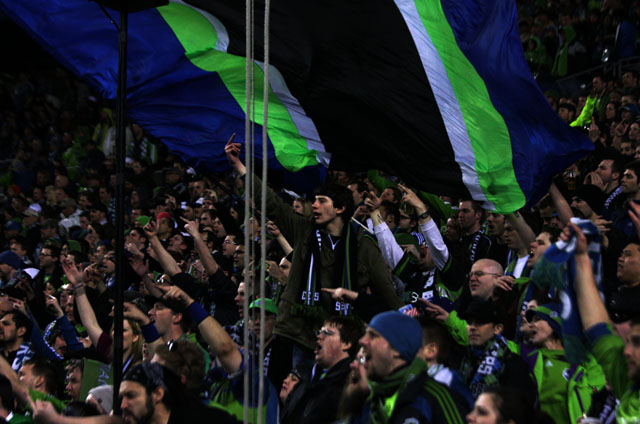 This was also when Fredy went for his epic bicycle attempt. It came very close, along with many other attempts. Nate Jaqua was even more threatening by sticking his head wherever the ball was. His size and presence was throwing the defense off, and is what allowed Zakuani to bag the garbage goal for the equalizer. 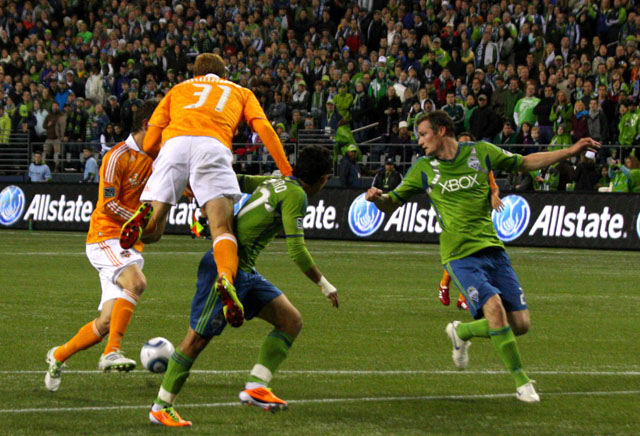 The final 10 minutes plus 4 minutes of stoppage time was tense, as the Sounders piled on all the pressure but just couldn't find the critical combination of luck and finishing.

In the end, a lot of credit must go to the Houston defense for playing like a solid unit. Tally Hall was playing like he wanted Keller's job. 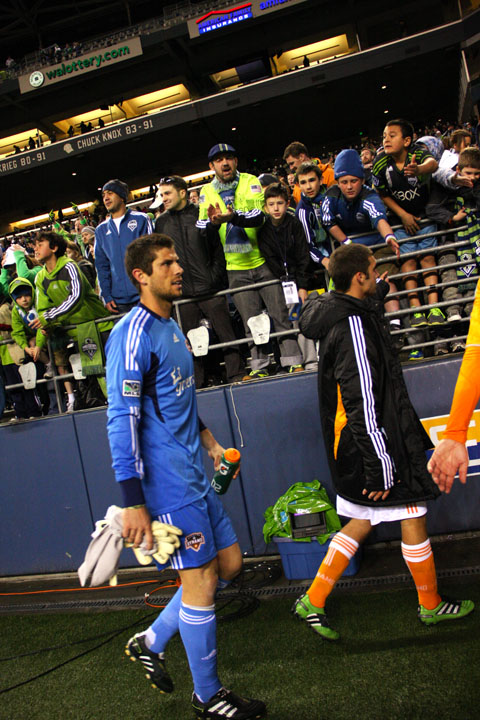 A draw is a draw, but it's still disappointing. While I was on the field, I was able to catch up with some of the team coaches who I remembered from the open tryouts. One of the coaches remembered me, and was standing on the boards next to me. As the game went on into the final minutes, you could see the frustration on his face. This was a game that the team expected to win.

Still, even as the team disappointed and as the fans were leaving the stadium, Sigi and a few of the players came over to the fans. This is why I love this club. 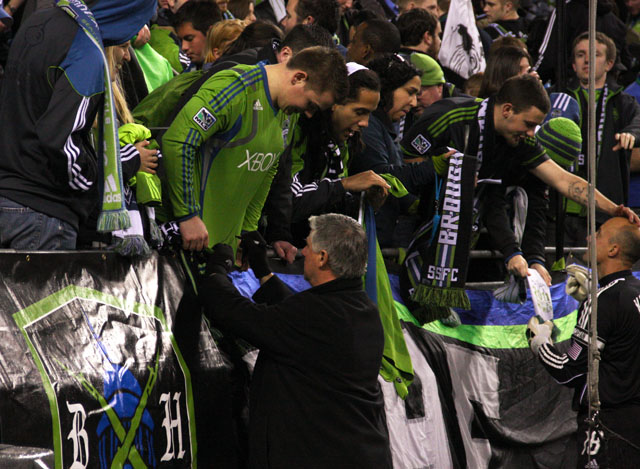 For these photos, and some more that weren't posted here, check out my flickr page, where I've also uploaded some shots from the Cascadia Summit.