Cascadia Summit Preview, What to Expect

Share All sharing options for: Cascadia Summit Preview, What to Expect 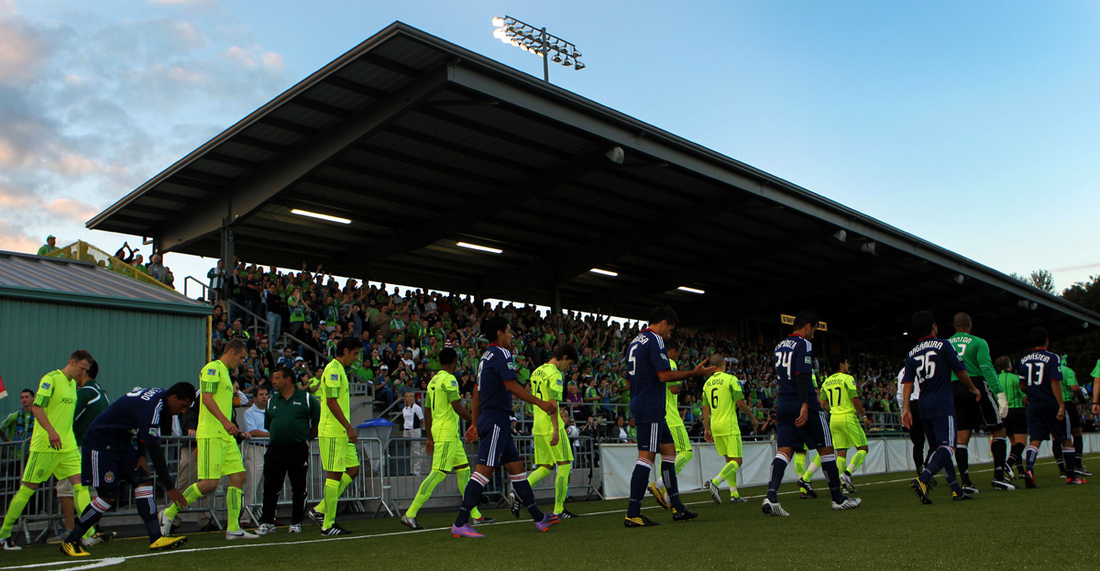 As the preseason winds down and we get closer and closer to First Kick, the Seattle Sounders look to finish their preparations on a high note with the Cascadia Summit. The Portland Timbers and Vancouver Whitecaps will be meeting us in the middle, at Starfire Sports Complex in Tukwila, Washington, to play a round of matches in front of a small group of fans. It will be a cozy setting, but an intense atmosphere, as teams clash for the first time as equals. Well almost equals.

The Timbers come with a 1-0-4 preseason record, while the Whitecaps are fresh off of 6-1 thumping against an amateur Arizona team. It is true that the two expansion teams are still going through their first camps ever as a team, but when it comes to Cascadia, you can expect them to understand just what it means and to be ready for it.

Here is the match schedule for this weekend.

If you are going:
Watch out for parking. Starfire is a cozy and cramped place, parking will be a bit hectic. If you can, try parking around or across the street to avoid the massive pileups in and out.
Wear accordingly. The weather forecast for tomorrow's Portland match is ugly, and considering that today we had sun, rain, hail, and wind, I would layer up in case you aren't seated in the covered main stand.
Get there early. You aren't going to want to miss out on any of this. With rival supporters groups in the same place for the first time in a long time, putting the Timber's Army, Southsiders, and ECS together in Starfire is like stuffing little three rowdy kids into crib. Expect lots of noise and lots of banging on things, like drums.

What to Expect From Portland:

Offense
Number 1 draft pick overall Darlington Nagbe is out for 2-4 weeks for surgery, so sadly we won't get to see Portland's biggest surprise until the season starts. Nevertheless, you can expect them to be fielding a strong team.

While they've only scored 3 goals in 5, their preseason record belies the attacking strength that Portland have assembled. Led by the dangerous poacher Kenny Cooper, he'll be eager show that he can once again make an impact in MLS, after failing to shine in Germany and England. There is the notable absence of Nagbe and Bright Dike, both due to injury, which has undoubtedly attributed to the lack of scoring so far, but watch out for Eddie Johnson (no, not that one).

Midfield
While P-Town's attacking is potent, it's the driving ability of their midfield that will pose the biggest threat. The two most recent acquisitions of USMNT's Sal Zizzo and KC Wiz's Jack Jewsbury are definitely noteworthy. And of course, there is former Columbus MF Adam Moffat, a particularly hate-worthy player. Look for Alonso, Evans, and Co. LLC to shut him down.

Defense
Portland's defense isn't really worth highlighting, because we'll be pulverizing them to a pulp. But just in case, watch out for Kerrea Gilbert, an Arsenal Academy product who before landing in Portland has been through the loan system with a number of lower league English clubs. Oh, and their backline is anchored by a certain Troy Perkins.

What to Watch for in the Whitecaps:

Defense
Vancouver have taken a polar opposite approach than Portland. Instead of making moves by signing players with immediate impact, Vancouver have decided to build from the back. Probably the biggest signing of both expansions has been the recently announced as captain USMNT defender Jay Demerit. After years of bleeding for club and country, Demerit has relocated to Van-City to help the club grow. With his valuable experience and leadership, you can expect Vancouver to have a very sturdy backbone and work ethic, which hopefully we'll be able to crack. Can you say epic Nkufo-Demerit battles?

Another really surprising signing is in Swiss DF Alain Rochat. Originally signed from Zurich last year, he stayed there on a loan as Vancouver finished their final year in USL. While there last season, he featured as a key part in their defense, playing full minutes against the likes of Real Madrid and AC Milan. After spending some time scouting him on youtube, I can tell you he has poise and decision-making that is rare in MLS. Combined with Demerit, they will be tough to crack. Watch for how he deals with our speedy options, particularly Zakuani if he's employed as a right-back.

Midfield
Another smaller mention includes draft pick Michael Nanchoff. The Generation Adidas kid will be one of the controllers of their midfield, and I think he could be a big surprise this weekend. Sticking him into the frying pan of Starfire could give him the stage to step up.

No Offense
Other than that the Whitecaps have absolutely no offense to speak of, so the biggest thing to watch will be how long it takes our offense to crack their defense.

Brad Evans and Nate Jaqua, the Lame Ducks
There's been a lot of pressure on Evans and Jaqua after last season was mostly spent injured. In truth, Jaqua's handful of appearances last year were never quite 100%, and after undergoing a successful surgery in the offseason, he is looking to come back to give Montero, Nkufo, White, and Fucito a challenge for their starting jobs. And what better time and place to do that than against the Timbers in Starfire?

Evans on the other hand is a bit of an enigma. He's never quite settled in his spot with the Sounders. After a brilliant(ly exhausting) first season, Evans showed that he can out-hustle a bulldog and out-fidget a toddler on a sugar high, yet his technical abilities were left lacking. This summer he has apparently improved, so in order for him to claim his starting job alongside Alonso he'll have to show he can control the midfield, but ALSO pass the ball without breaking any car windows.

The Boss/Ford/Meredith Battle
The one and only Kasey Keller has announced that he cannot in fact play on for infinity years, and that this will be his last season. While his status as this season's starting keeper is not in question, the three guys scuffling behind him will want to remind us all that Kasey is indeed retiring. Kasey will probably get a good chunk of minutes this weekend, but you can expect Sigi to throw in at least one of these guys to see who can hold their bladders in the full-pressure environment of the Cascadia rivalry.

Sigi and Co.
Lastly, I think it'll be interesting to see just exactly how Sigi and Co. handle the Cascadia Summit. Given that these are still preseason games, there's no real pressure for him to field full strength teams. But, this is Portland and Vancouver, and there will be a raucous audience expecting us to spank our Northwest neighbors. So if, for example, we are down 2-1 late in the game, I'd hope that Sigi will be taking this seriously enough to play for the win, and not just use the weekend to continue his tinkering.

Also, I've made a small wager with the Vancouver and Portland Offside bloggers for this weekend's results, and I don't intend to be buying those two guys beer.