The Portland Timbers got a right welcome for their visit to Starfire Sports Complex. Rain. And lots of it. Not to mention an intimidating atmosphere courtesy of the Sounders home supporters. However, the brave Timbers fans who came won't even be thinking about the cold and rain, as the Sounders lost 2-0.

A quick recap of the night, with pictures. 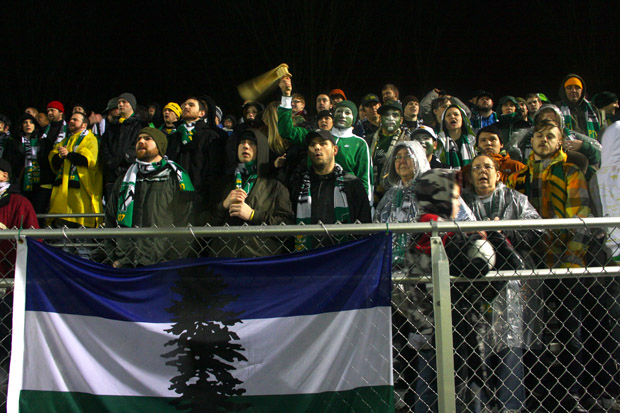 The Sounders starting line up was Kasey Keller, Fredy Montero, and, oh well you can go ahead and see for yourself. 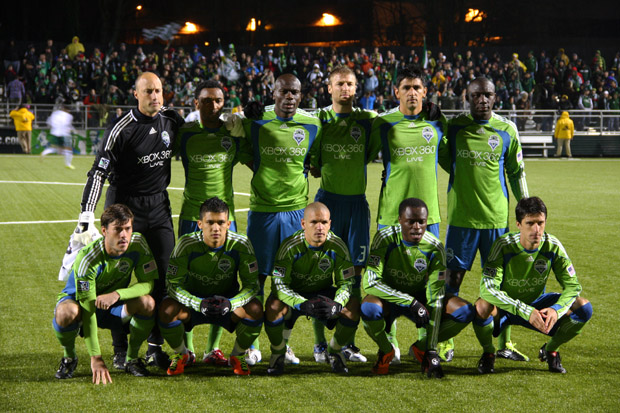 The crowd was sold-out at 3,100, which on paper doesn't seem like a lot but felt like it should have been more. The noise coming from the main stand was incredible and did not let up at any point in the match, even as Portland scored twice. The Timbers fans who were seated in the exposed far bleachers were just as noisy, bouncing around on the bleachers like it was a giant drum. 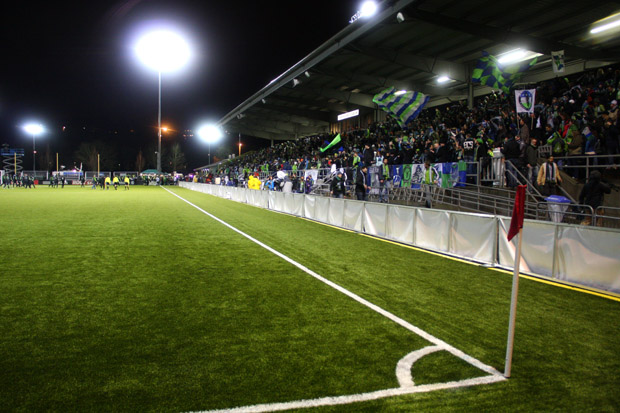 The Whitecaps were in attendance too, sitting up in the top, closely watching their two Cascadia neighbors. 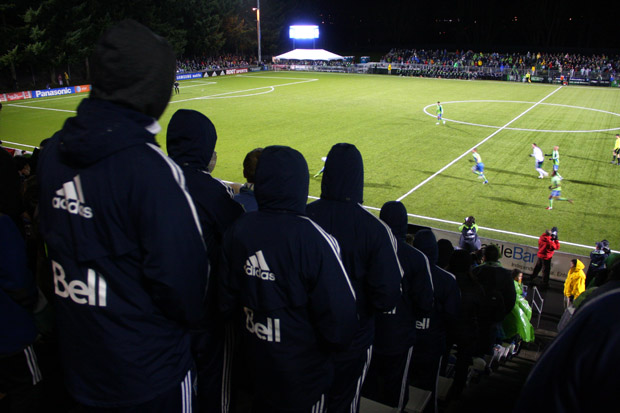 The game was off to a good start, and it was obvious that it was going to be an intense game. Through most of the first half the pressure was square on Kasey Keller's end as Portland used their speed to run the game. It wasn't long before Kenny Cooper used his presence to create a shot which Kasey Keller couldn't handle. Jorge Perlaza was waiting patiently as the ball fell into his lap, Portland 1 - Seattle 0. 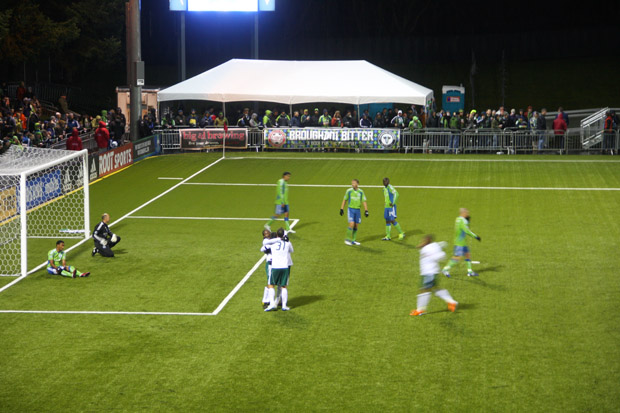 This was probably the key match-up of the night, Jeff Parke on Kenny Cooper. He did have some help with Hurtado making some vital stops, but Cooper was too silky and too swift for anyone to contain. He was all of the Seattle's first third, and he controlled the tempo of the Portland attack. 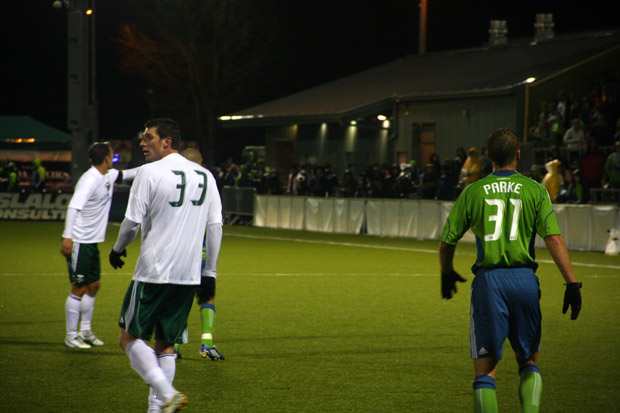 The rest of the first half consisted of both teams taking dips at one another. At half-time, both teams went back to the Starfire shed to reflect. ECS was going crazy as usual, while everyone went en masse to the beer garden. 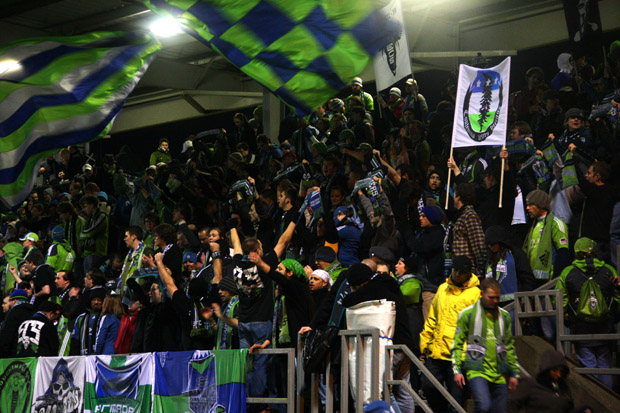 Random fan shot of some happy people, despite the half-time scoreline. Say cheese! 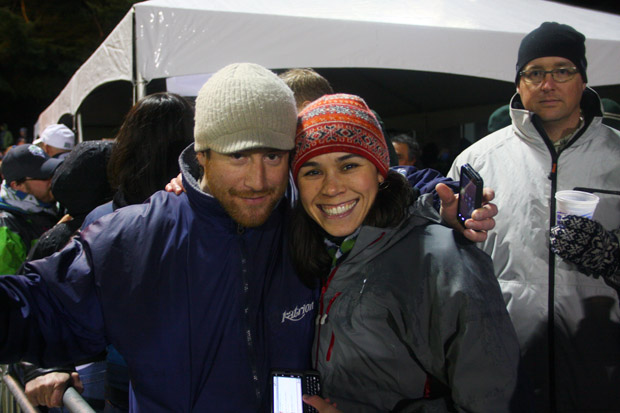 I was standing near the Timbers supporters when the teams came out and I heard a collective "woahhh" as ECS unfurled this big blanket. OK, not really, but it was a sight to behold. 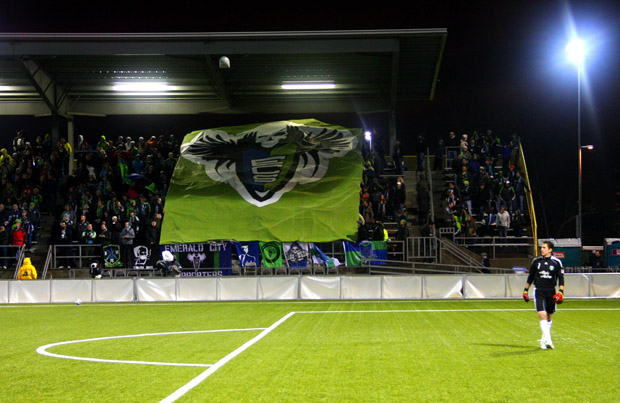 The second half got underway and I rightly predicted that the action would reverse. Way to my surprise, the Sounders starters all returned, which in my head had me thinking "Oh snap, Sigi wants to win this."

I noticed that Michael Fucito, Erik Friberg, O'Brian White, and Patrick Noonan were all warming up, as well as Terry Boss doing goalkeeper drills. These would later end up being tactical substitutions, with the exception of Boss. 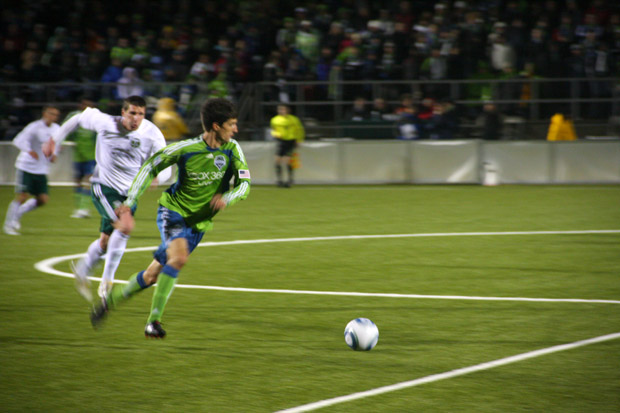 The story of the second half was Alvaro Fernandez. He's been talking recently about his new motivation to play well, now that he's settled in after his first season. Against the Portland defense, he was showing it, as he was continually making cutting runs towards the box. And of course, when you move your feet like that, you'll create shots. Midway through, he had the Sounders best chance of the night, as the ball bobbled around the box. Winding up for the volley... 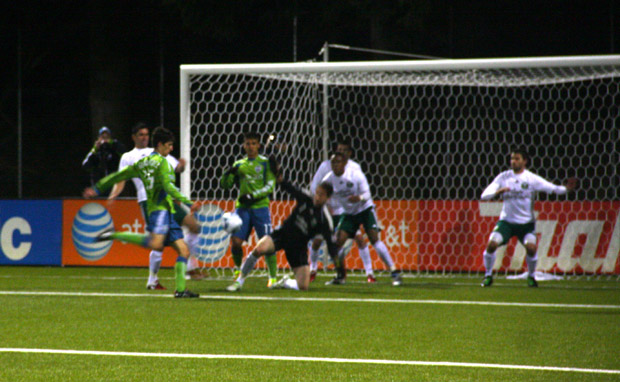 but sends it over. 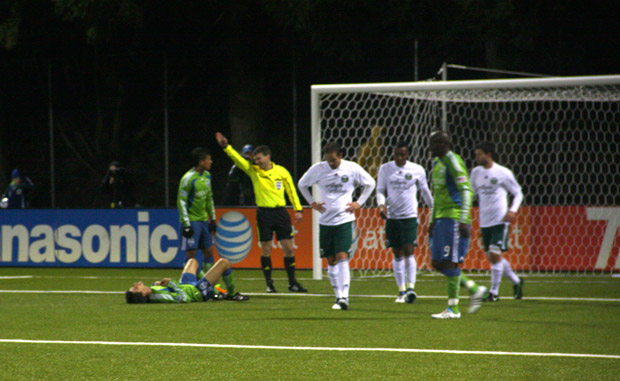 The rest of the second half consisted of very clean play by the Sounders. At times Fredy Montero fought off Portland's defense like Drogba egging on Vidic. Osvaldo Alonso also improved as he became a presence in the middle and the improvised solution to Kenny Cooper.

Friberg also looked to get his very first minutes in front of his home fans. 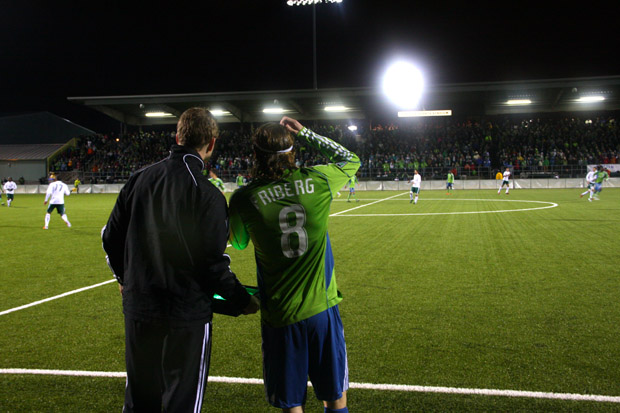 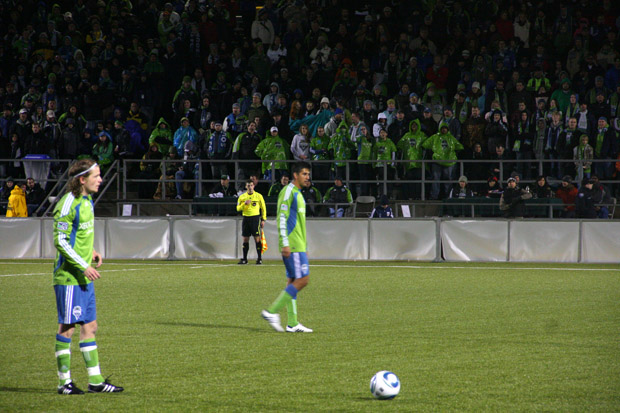 Later on, there was a dubious play that could have/should have led to a call for a handball. When it happened, the entire stadium erupted, and Sigi was furious to no avail.

Funnily enough, there was one poor Sounders fan, drunk off his horse, who was giving the refs an earful. But he ended up winding the adjacent Portland Timbers Army more. They got into a bit of a shouting match, but there was one very brave stadium clerk who kept them separated. 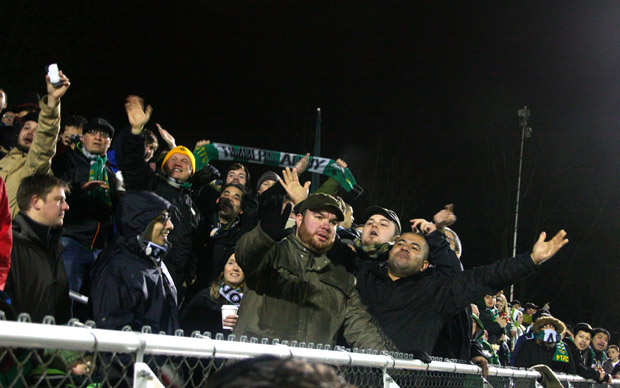 The face of the Timbers Army. 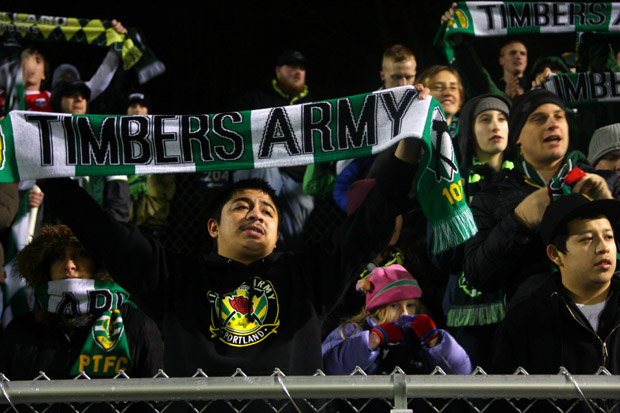 And the rest of the Timbers supporters in full voice. 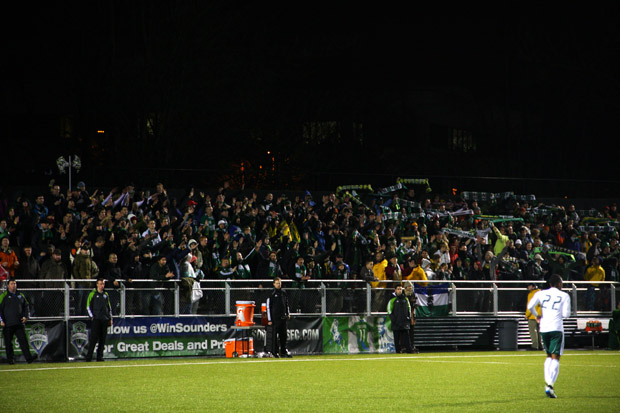 O'Brian White coming on in the second half. 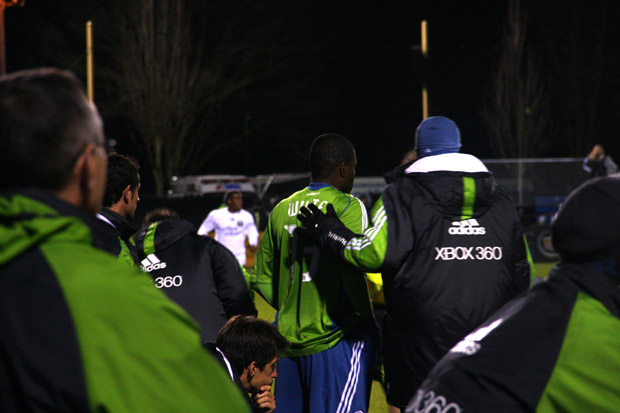 Which had Fredy Montero thinking about what he could've done differently. A solid, but uncharacteristically quiet night from Fredy. 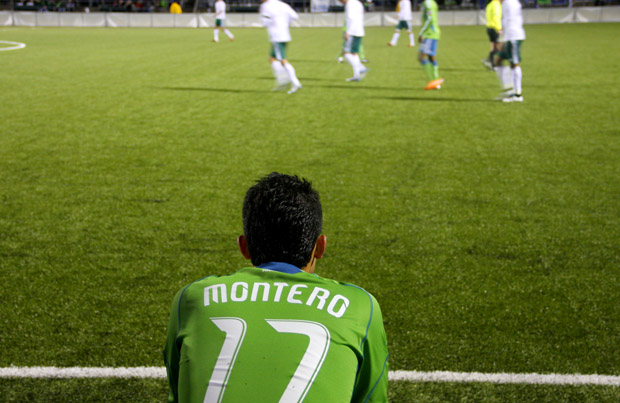 As the minutes were slowly dying an agonizing death, chances kept coming. Pat Noonan also came on five minutes later in the second half, and by then it had become a war zone. The Sounders kept chipping away but the Timbers defense stood like big immovable trees. 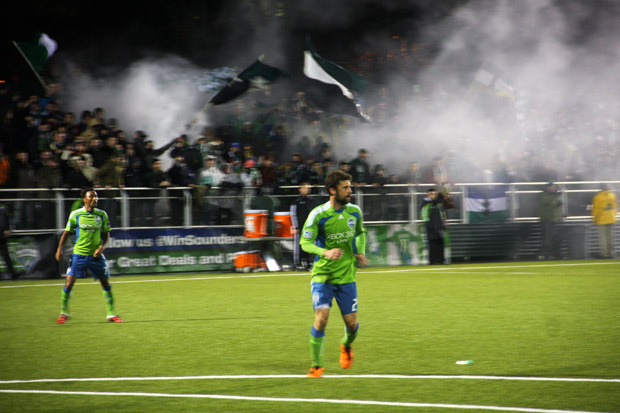 I guess they were burning themselves then, because the entire field was covered in smoke. Which, for Starfire, was absolutely epic. The Sounders reached desperation mode with about 10 minutes left to play. Steve Zakuani had several darting runs down the left, beating his defender several times to send in a cross. However, each time a ball would come in, the Timbers captured it and hoofed it up field into the smoke.

Unfortunately, it was in the smoke and in the final minute of stoppage time that Portland iced the game. Kenny Cooper. And that's all I will say about that.

As the match ended, Noonan left as a gentleman and shook hands.

Portland's win came from two very lucky counter attacks. Not surprisingly, they had very few actual shots. It did seem like the Sounders had more shots (18 in total, 4 on goal), but the Sounders absolutely dominated the field. From the middle with Evans and Alonso, they switched easily and at will from left to right. And from what I could see, the missing piece wasn't the delivery, but the finishing.

I was pleasantly surprised to see the entire Sounders team playing with emotion and heart. These Cascadia things can get very ugly and sloppy sometimes, but both teams were trying to bring the best out of themselves and not play to their opponent.

With only one more match before the Community Shield against Colorado, the MLS season is almost here. A 2-0 loss to Portland will hurt, but I think we are getting closer to reaching our full form. As the first real chance for the first team to take an on opponent for real, I think there will be some experience gained.

Don't forget, Vancouver is on Sunday. While this game was a test for our defense and control, the Whitecaps will be a true test for our offense.