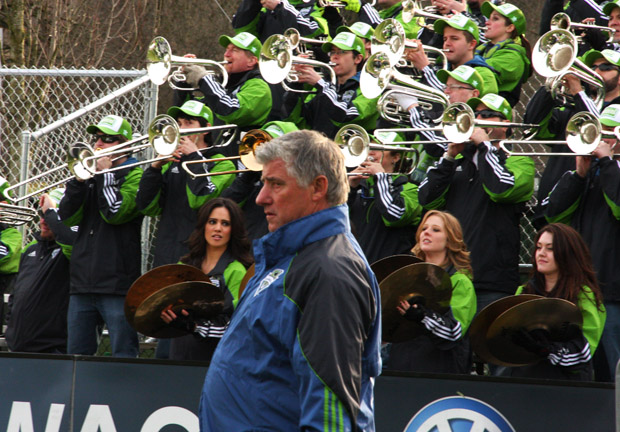 Sigi Schmid is facing the music.

56K, don't even think about following the jump.

Sunday afternoon was kind to the traveling Whitecaps fans (and left over Timbers Army/part-time Canadians), but not so kind to the Sounders fans who came out again as the Sounders lost 2-3 in a close game that came down the wire. The Whitecaps took an early lead through a 6th minute Omar Salgado individual goal, followed by another quick goal by Russell Teibert in the 12th minute from a speculative cross on the left wing that slipped through the gloves of Terry Boss.

The Sounders did come back after a lucky goal from Roger Levesque. The game was mostly a stalemate up until Miguel Montano came on as a substitute and grabbed a consolation goal in the 77th. From then on, it was scrappy as the Sounders tried with all their might to grab an equalizer. Even with 6 minutes of added time, the Sounders failed to deliver when needed.

Here are some pictures from the match, and a recap of my match experience.

Omar Salgado is the real deal. He may be young, but he stands like he's 7 feet tall and runs like a freight train. The Whitecaps have a real case on their hands for getting him eligible as soon as possible, because he was the heart of their offense. Slightly jealous, but I am reminded of the fact that he is American (whew). 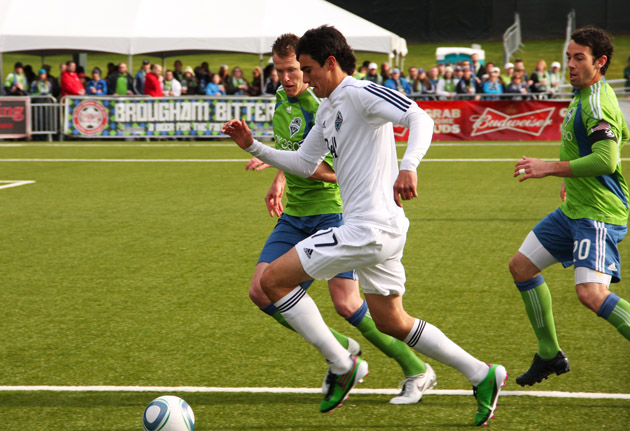 His first goal was a spectacular individual effort, just picking up the ball and feathering it past Boss. 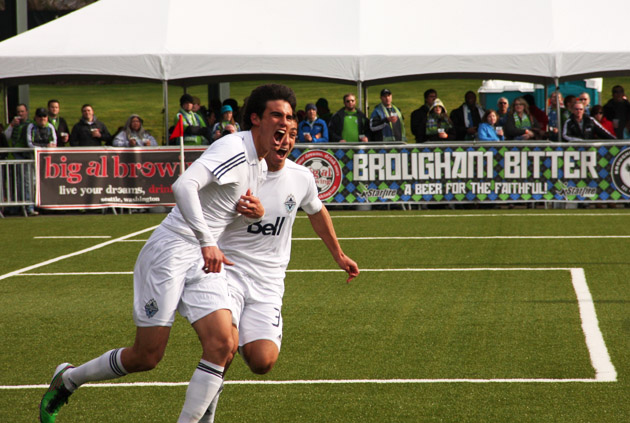 This was the second goal from Teibert's leftsided cross. Terry Boss was unlucky to be caught in the act here. Robert Green would've looked away. 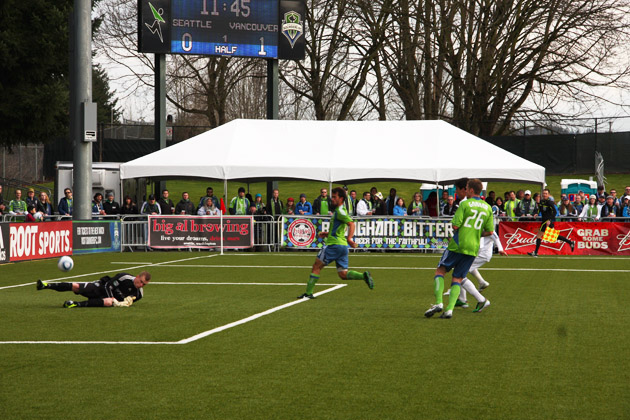 ECS was trying hard to motivate, but frustration was all around as it was Portland all over again. 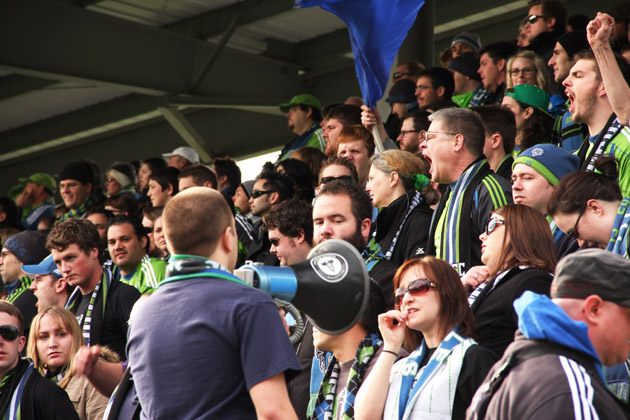 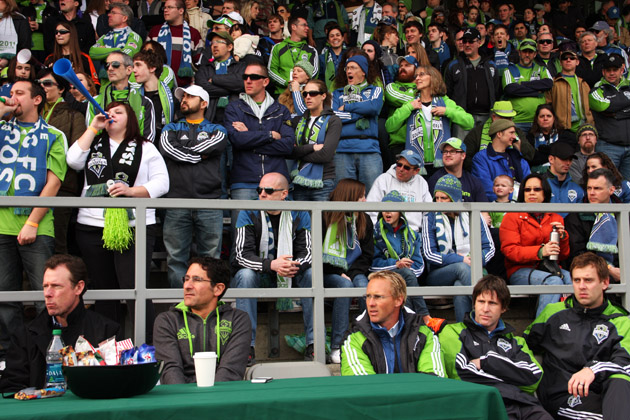 The visual display was fantastic again. I wonder if those giant flags are heavy? 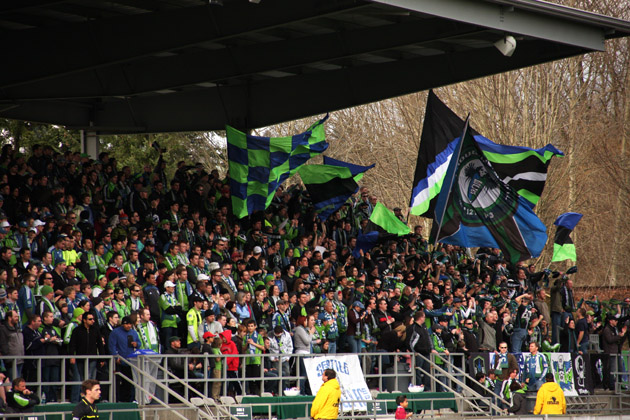 The Southsiders with their own, a giant framed picture of Teitur for Prime Minister. 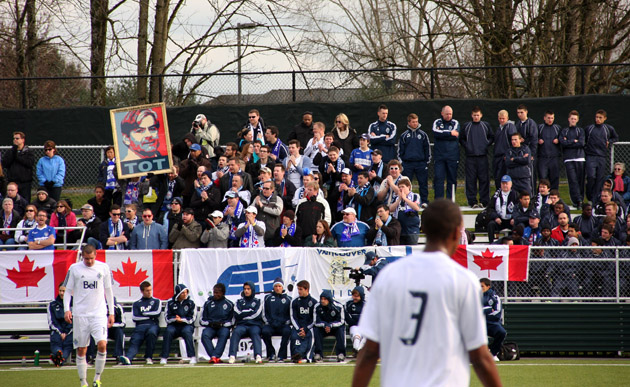 See what I did there? O'Brian White surrounded by white. 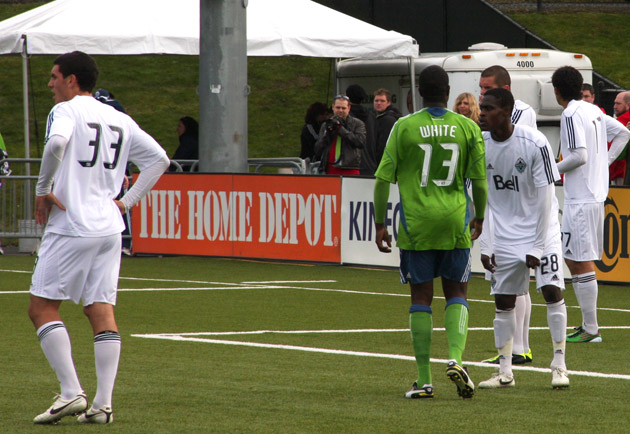 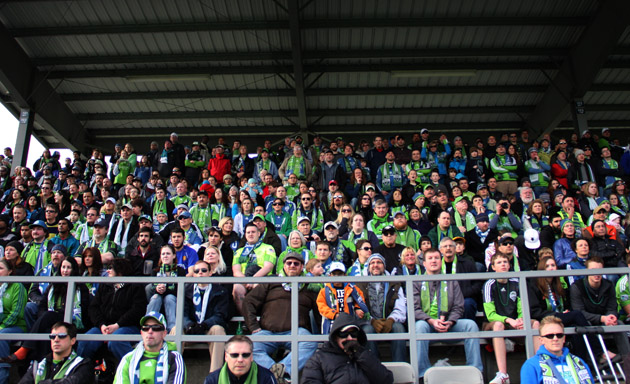 This ballboy was very attentive. 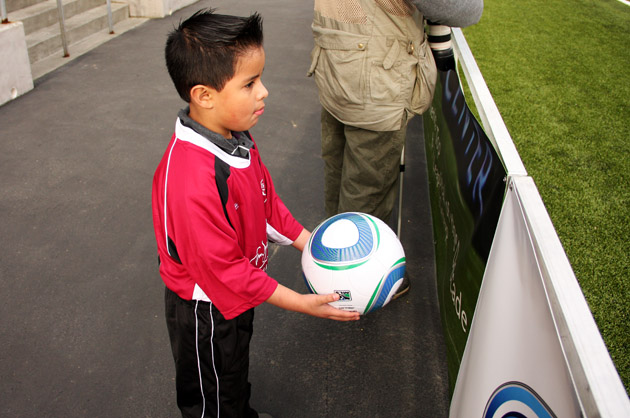 He had a great view of the game. 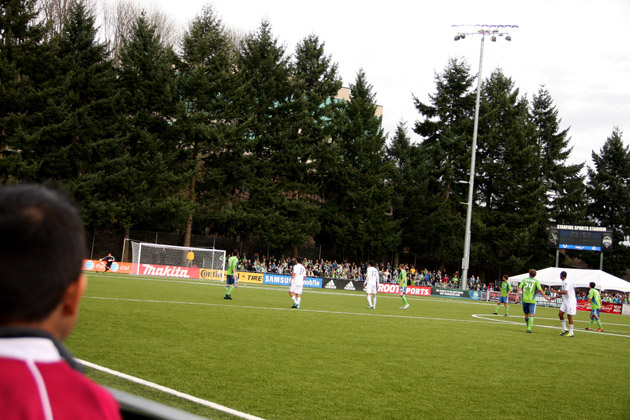 Terry Boss was tested several times, and here he is making a solid stop from a long range shot. 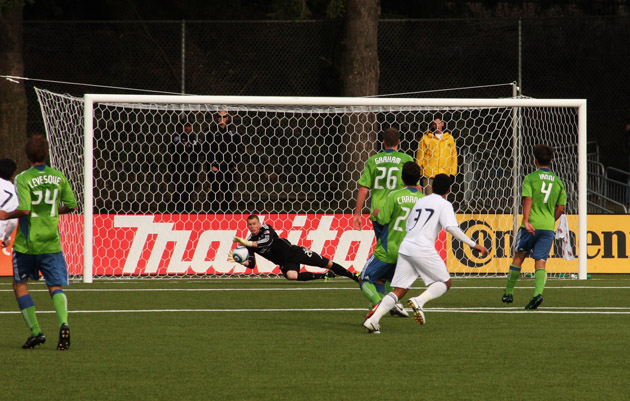 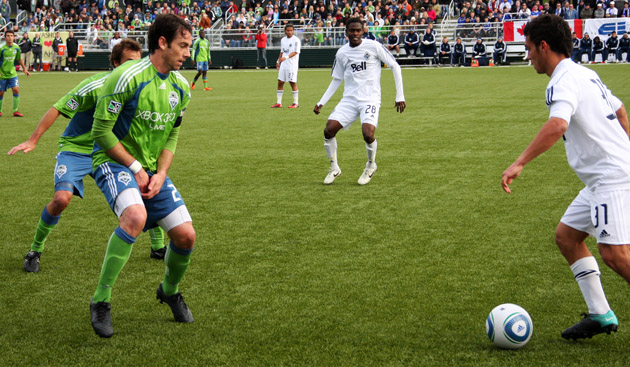 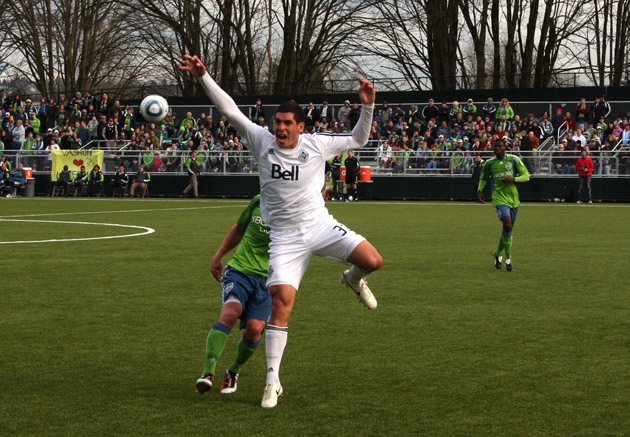 Michael Fucito was having a solid game and giving the Caps defense a good fight. Unfortunately, a little before half-time, Fucito was making a dash down the right sideline and pulled something bad. I could see it immediately on his face, and he went down in a heap holding his groin. Team doctors came over and brought out a stretcher, but he was able to get up and leave the field on his feet. I am sure I am not alone in saying that I sincerely hope it's not too serious and he can make a quick recovery. Especially with all of our scoring issues, we need Fucito out there.

Warning, you might want to just skip past the next couple pictures if you don't want to feel bad... 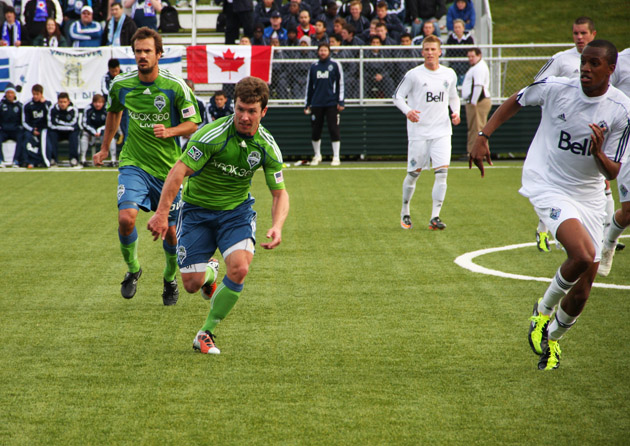 He was flying down the right when something just caught. 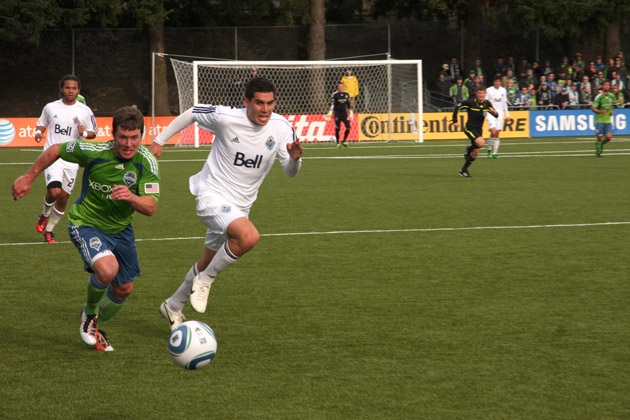 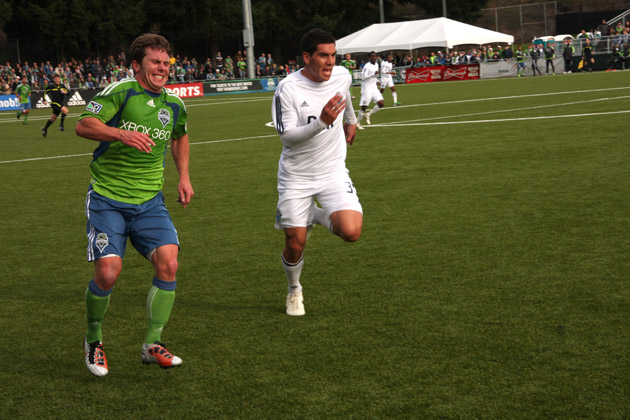 Docs checking him out, it was an uneasy couple of minutes. 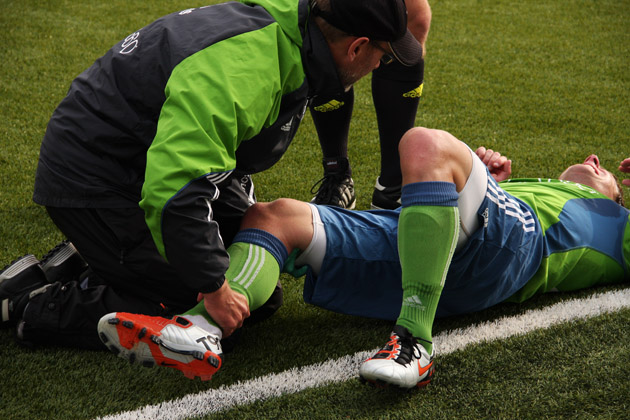 Thankfully leaving under his own power, but in a lot of agony. 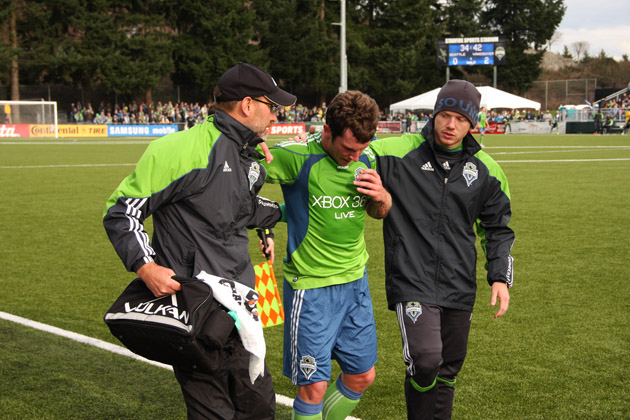 After a bobble in the box, Roger Levesque latched onto the loose ball and made the net ripple. Roger celebrating his goal with teammates. 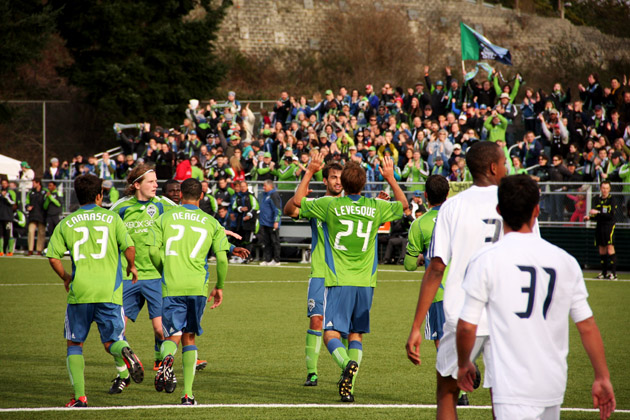 At half-time, Omar Salgado receives some advice from Jay Demerit, who did not dress for action. 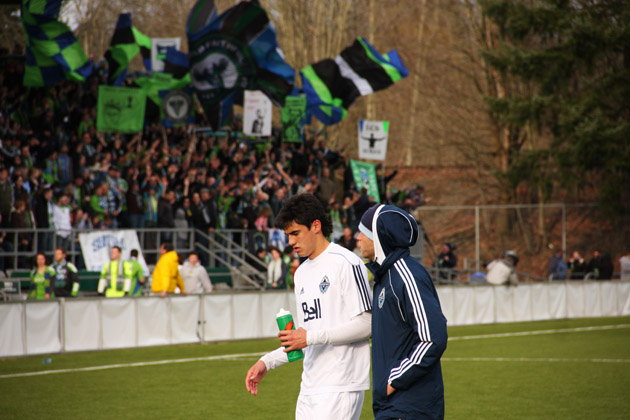 Lamar Neagle gets his feet wet. 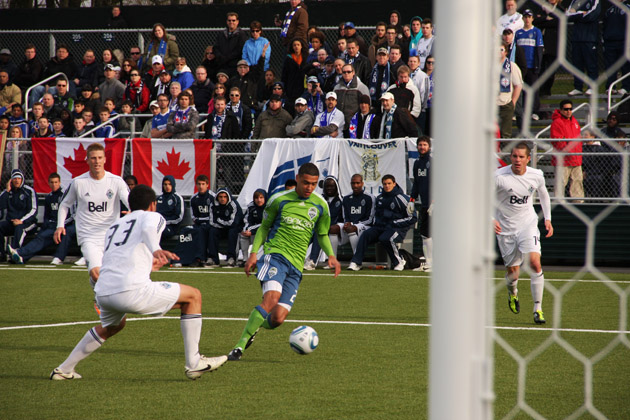 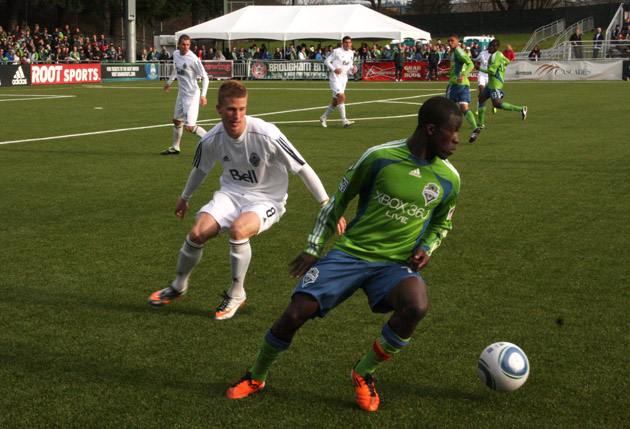 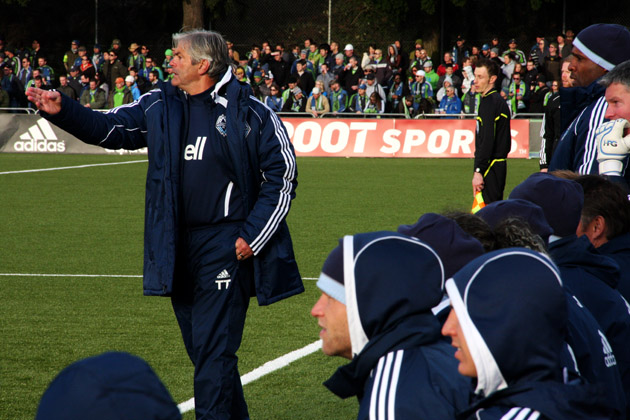 Meanwhile, Sigi and Schmetzer struggle to find the right fit. 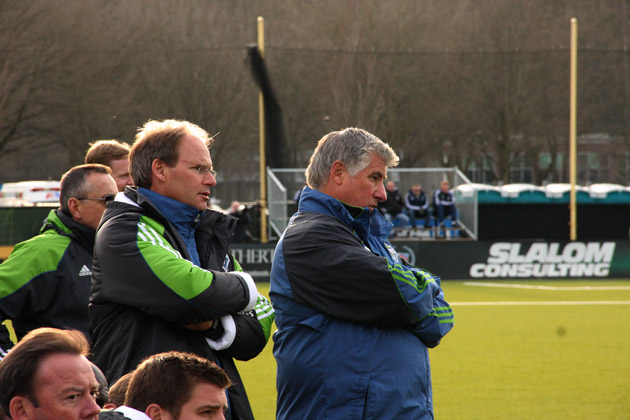 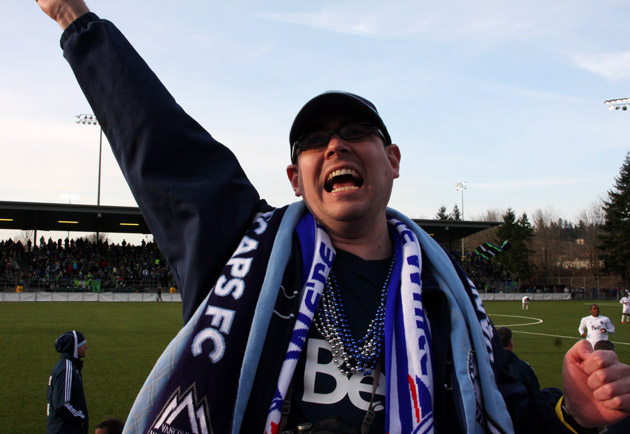 And one wager settled. Mao, you'll get yours on May 14th. 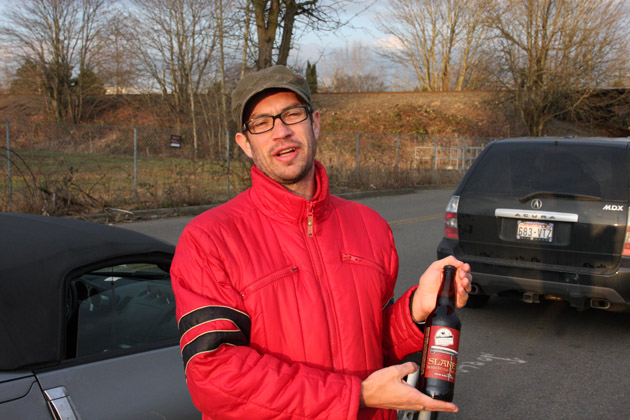 Now the Sounders head into the Community Shield with Colorado with a dead even preseason record of 4-4-2, whatever that means.

Say what you will about our current striker crisis, there is no one racking his brain more than Sigi Schmid right now. In the last three days, Sigi has employed (seriously) SIX strikers. Here, I'll count them for you.

The 2 goals that we scored, compared to the 5 goals scored against us, came from Roger Levesque (1 scored, and 1 assist), who at times was too busy playing all over the field covering our holes to even be considered an attacking forward.

I'm not trying to be too hard on the team at this moment, because I understand that it is still the preseason, but we set out with a number of goals for this Cascadia weekend. For one, these matches were supposed to preview the Cascadia rivalry and show MLS that traveling fans can behave and provide an exciting atmosphere for matches. But the more important and more obvious goal was to come out on top ahead of our rivals and be ready for MLS. While our fans acheived our number one goal, with absolutely no thanks to our team, it seems we've taken a step backwards with regards to being prepared for the season. If you had told me we'd be losing to the two teams predicted to be fighting for the wooden spoon this season, I'd have told you we are way too prepared. After blanking against Portland, and allowing Vancouver to score the most goals this preseason, I'm almost wishing we had more time before March 15th.

In any case, I had a fantastic time this weekend, took way too many pictures, and can really now appreciate the value that Northwest soccer has. It was a great experience, and if you missed it, take it from me that come this summer when we play our first official MLS games against Portland and Vancouver, it will be quite the show.