Share All sharing options for: Street Soccer for Social Change

I would like to share with you guys an amazing group doing incredible things, Street Soccer Seattle.

Some of you may have heard of the Homeless World Cup, an international tournament where teams of homeless soccer players from around the world gather to play soccer. As a testament to its success, 31 of the 141 players from the first 2003 tournament held regular jobs a year later, with countless others benefiting from the positive impact of competitive and organized soccer. The tournament has now been running every single year all around the world, and has been highlighted in the documentary "Kicking It".

After the huge success of the international version, Street Soccer USA looked to implement the same model in urban areas in the US, starting off in New York City, Los Angeles, and Denver. It has also spread to Seattle, and the small and eager Street Soccer Seattle group is making waves. 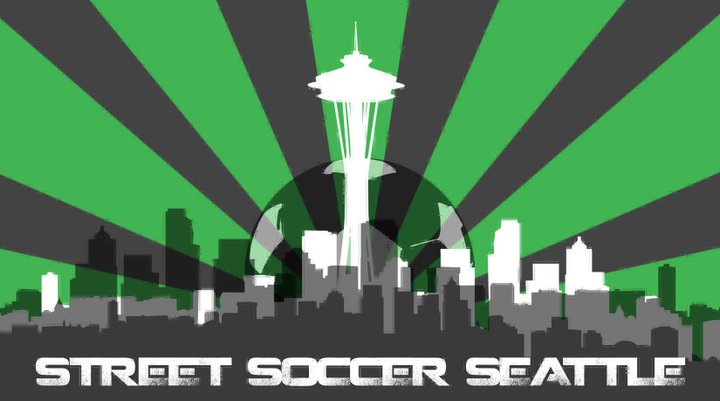 Street Soccer Seattle is a all volunteer, non-profit group that works to give homeless people in the Seattle metropolitan area the chance to play soccer. Started by a University of Washington Student a couple years ago, the group has grown into a lifeline for many homeless people around the city.

What they do is work with homeless shelters and community organizations around Seattle to find homeless people and put them on a soccer field. The team meets almost every week to practice and play pick-up, and the public is always invited. Last year, the team flew out to Washington DC for its very first National Street Soccer Tournament, where it competed with other Street Soccer teams from 20 other cities. Incredibly, the team played hard for a week, and won the consolation bracket of the tournament.

A couple months ago, when I was training for the Sounders Open Tryouts, and I mentioned Street Soccer Seattle. That was because I had, not surprisingly, procrastinated and put off getting in shape until about two weeks before the tryouts. I heard that Street Soccer Seattle was having one of their monthly speed tournament fundraisers, So I decided to go to see if I could whip myself into shape with some playing time.

When I got there, I was completely shocked by 1) the physical workout I got and 2) how much fun I was having playing soccer again. First of all, the guys playing on the team are pretty good at soccer, and are really competitive. At the same time, all of the guys are insanely cool, and it was only after three and half hours passed of playing soccer that I realized how much fun I was having. Playing with those guys made me realize why I love playing soccer in the first place. It reminded me that there are bigger things in life, like homelessness, but soccer is such a great instrument for connecting with people.

Here's David Nibley, the president of Street Soccer Seattle, with a short video at the event.

David says the message and goals of Street Soccer Seattle are simple and clear.

"Soccer has a positive impact because it is a fun team sport. The team aspect is where the real power comes from. Belonging to a positive team, a community, is something that many people on the streets don't have access to.

Homelessness can be very isolating. New research is coming out showing that something as simple as social interaction can have a huge impact on people experiencing homelessness. We like to invite the community to come and play with our team often for that very reason. It helps blur the lines of marginalization. Then, our players also experience the health benefits of such a physical sport along with the confidence boost of learning and developing skills."

At the event, in between running around and playing soccer I was able to sit down with David and ask him more about the impact that soccer has on the players. He described the experience of taking this once in a lifetime trip to DC to be a part of the tournament.

"Last year's National Street Soccer Tournament, our team won the consolation bracket (9th overall), and they were the happiest 9th place team you have ever seen. It was our team's first tournament, and our team went through some growing pains at the beginning. But, the guys stuck with it, believed in themselves and each other and beat some really good teams to finish on a high note. By the end, our team could have played with anyone and they were so proud and so confident in themselves.

The best moment of the tournament was on the way to the airport. I noticed one of our players staring at the trophy and smiling from ear to ear. He looked at me and said, "Coach, I have never been apart of anything like this in my life." It floored me. He was one of our best players, but he had never been on a team, or in a tournament or won a trophy (and it was the 9th place trophy for crying out loud!) But it meant so much to him."

Yesterday marked the beginning of the $2,400 in 24 hours, a fundraiser attempting raise $2,400 for this next season. The funds will allow them to buy nets and gear for the team, pay for league registration fees, and other costs that the soccer players can't afford. They haven't reached that goal yet.

And there's more. They are also hoping to raise enough money to have their own van, because transportation is a big barrier for some of the players being able to make it practices and games. It's sad, but the reality is that some times a $2.60 bus token is a big enough barrier to keep a person from being able to play soccer.

So, if you love soccer and have a good heart, I implore you to donate to Street Soccer Seattle. Street Soccer is a 501c3 charity, so you can write tax-exempt donations through Street Soccer USA. They are only asking for small amounts, starting at $2.40, and working in larger increments. So consider giving a bit more! Perhaps the amount you would usually spend on coffee for a week, or the one or two beers at a Sounders game, and pledge it to help change someone's life through soccer.