In previous editions, we looked at the correlation between first half and second half rate stats for MLS players last season and then added strike rate to the list of stats.

Next I want to take a look at team rates. I went through the work of generating and comparing the first and second half rates, as I did with players, but it was quickly obvious that the number of data points was just too small to draw any meaningful conclusions. With only 16 teams, any sort of comparison or correlation would be pretty suspect. I will say that all of the stats (Shot Rate, Accuracy, Conversion, and Strike Rate) had low correlation values from one half to the next, which we would expect for the last three. A low correlation for Shot Rate was something of a surprise, given how relatively consistent it is for individual players, but again, with only 16 pairs to compare I wouldn't be comfortable drawing any conclusions from it.

Shot Rate is the one statistic that seemed to show some consistency for a single player from one half to the next and therefore seems more likely to be under a player's control than the other rates. But we can't necessarily extrapolate from that to the team level. Here are the 2010 Shot Rates by team: 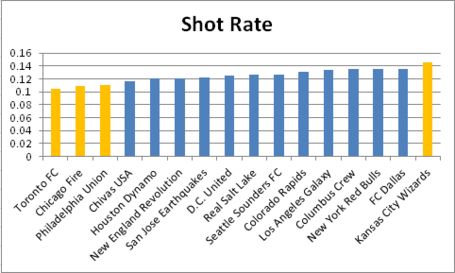 There's a pretty good correlation here between our subjective notions of team quality and higher shot rates. Notably bad teams (Toronto, Chicago, and Philadelphia) were all left out of the playoffs last season and there wasn't any significant reason to think that was an unujust result. In general, the good teams are clustered in the top half. Of course, we're only looking at offense here. A team can just as well be bad by letting in a large number of shots.

There are a couple of outliers I want to point out. Kansas City, as we've pointed out elsewhere a few times, led the league by a mile in shots created last season. They're the only team more than a standard deviation higher than the mean in Shot Rate. And yet they didn't make the playoffs. It wasn't a defensive problem. . they had an average Goals Against last season. But despite all of the shots, they scored a below average number of goals. I think getting a better handle on what happened with Kansas City last season would be a good test for any significant theory of offense in soccermetrics. Were they just unlucky, or were there factors on that team that resulted in consistently lower quality shots? Was it the fact that they played at such a small park (and therefore the play was always nearer the goal than on other pitches)? Also interesting from the other direction is DC United, who generated an average number of shots but scored them at a tremendously low rate, which we'll get to shortly.

Accuracy, which is the ratio of shots taken that are on goal, treads in a fairly narrow range for most teams. All but 4 teams are in the 0.35-0.4 range. Here's the full table: 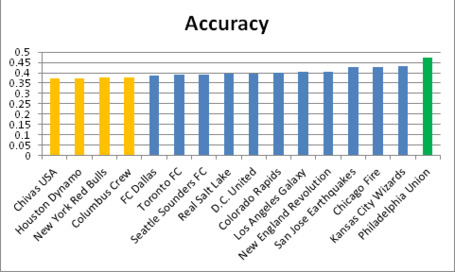 Again I've highlighted teams outside a standard deviation as yellow, and Philadelphia gets the green for being more than 2 (actually about 2.5) standard deviations out of the mean. That's pretty amazing. It's also interesting that there doesn't seem to be much correlation here between subjective team quality and Accuracy rates. The Red Bulls were considered the best team in the East and one of the top 4 or 5 in MLS, but were third to last in Accuracy. New England was one of the worst teams in the league, but had the 5th best Accuracy. And of course Philadelphia didn't make the playoffs despite Accuracy off the charts. From this data it looks like Accuracy isn't a particularly good predictor of team quality. Also note that Kansas City shows up as the second best Accuracy. Which means that not only did they create a lot of shots, a very high percentage of them were on goal (which explains why they had by far the most Shots On Goal in the league last season). And DC United shows up as having an average accuracy. Despite that, it would be hard to overstate how bad DC United's offensive results were last season. No other team scored in the 20s in goals and DC United was barely out of the teens with 21.

Conversion shows significantly more variation than the other rates, with a standard deviation of nearly 5% around a mean of about 27%. Here's the table: 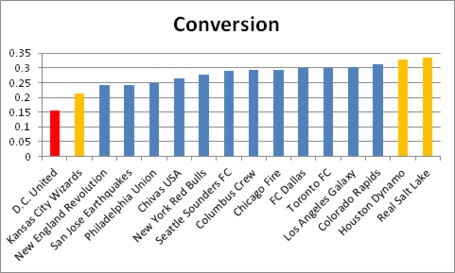 Here we see a couple of our previous questions answered. DC United, despite having an average Shot Rate and Accuracy, had a tremendously low Conversion rate. If an average number (or 27%) of their Shots on Goal had gone in, they'd have scored 36 goals last season instead of 21. Although their defense was also pretty leaky, the difference between 21 goals and 36 goals is vast. That's only 2 fewer than the Red Bulls scored. So is Conversion at the team level largely a result of luck, as we've argued it is for MLS players at the individual level? If so, DC United were profoundly unlucky last season and a massive improvement may have been in the cards regardless of what changes they made in the offseason. Similarly, the Kansas City question is answered here. Despite a large number of shots on goal, only 21% went in. If they scored at the average rate, they would have finished the season with 46 goals, which would have led the league. Again, if luck was the major factor here, they're due for a rebound. Another interesting test is Real Salt Lake, who led the league in Conversion last season. If they keep up a high rate this year, it's an argument that their high Conversion is due to more than luck. If not, they're due for a regression from a rate that helped them lead the league in goals last season. So far this season they have a Conversion rate of over 50% (7 G in 13 SOG), so maybe they have something figured out.

Because Strike Rate is just the product of Accuracy and Conversion, we shouldn't see any real surprises here. It will just accentuate teams that were either good or bad at both. And because Conversion seems to be more variable than Accuracy, it's the Conversion rate that will dominate, to the detriment of DC United and Kansas City. 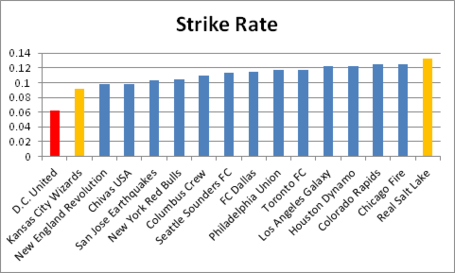 As expected it's pretty much the same order as the Conversion chart, though Philadelphia and Chicago get helped out by their relatively high Accuracy rates.

There's too little data here to draw any significant conclusions from. I think the most important question from an analytical perspective (and from the perspective of fans of a struggling team) is which rates are governed more by bad fortune than by bad talent or bad tactics, and to what degree that's the case. At the individual level we've seen some evidence that Accuracy, Conversion, and (necessarily) Strike Rate are all somewhat erratic and likely influenced by luck, but it's not clear whether that might hold at the team level.

Next week I'll look at the same stats from the defensive side to see if there's more or less variation there.