Seattle draw San Jose 2-2, but things are looking up

Share All sharing options for: Seattle draw San Jose 2-2, but things are looking up 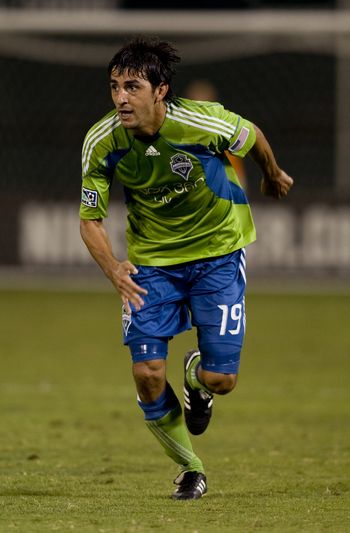 Leonardo Gonzalez, Man of the Match.

It's not a win, and even though we had several chances to put it all beyond doubt, a draw on the road at a place like Buckshaw Stadium isn't too bad.

Mostly because this was a good game. Tight back to back action meant great shots, and some great physicality (though Wondololski couldn't seem to handle it). Two goals, from Brad Evans and O'Brian White, mean that we don't have to worry about scoring woes anymore.

1. Leo Gonzalez, the unsung hero in games like these. He single-handedly shut down Chris Wondolowski. To say that Wondo is one of the most dangerous forwards in the league is obvious to anyone with eyes, and the defensive shutdown that Leo used on him was so sublime that you couldn't look away. Leo had him physically beat with fundamentally good form, play after play after play. Of course, in a game like this, Wondo and the Quakes had more than a few chances, and Leo stepped up multiple times to stop them as the last man back, including a beautiful sliding tackle. By the end of it, Wondo was mentally and psychologically beaten, pulverized, and destroyed.

2. I think we found our second forward. Sigi Schmid gambled by starting Mauro Rosales at forward right behind O'Brian White and it was perfect. San Jose's stadium creates a small-field atmosphere, where the the size of the field shrinks and the pace of the game speeds up. Putting an experienced veteran who knows how to play in these scrappy games was a masterstroke by Sigi. Mauro Rosales controlled the attack in the same way Carlos Tevez would, driving it forward by driving the players around him forward. O'Brian White wasn't stranded by himself anymore, gaps that are always in the transition of the attack were filled, and most importantly, Brad Evans wasn't all over the field.

3. Which leads to this point, that Brad Evans was harnessed by Mauro Rosales. I think Evans, who has a habit of being all over the field, was relieved of that duty by Rosales tonight. Instead of Evans trying to do everything at once, he was allowed to sit back and focus on the defense and the transition from the back, while Rosales directed the traffic up front. It was genius. And I think we saw the focus of this come to a point when Evans was able to slink around the far post for the first goal.

This makes me wonder if Sigi will stick to this new discovery. The only reason why Mauro was started is because Fredy Montero is injured, and likely because Nate Jaqua is not match fit to be starting. It remains to be seen how long Fredy will be out for, and if Sigi prefers to keep Jaqua as the 70th minute secret weapon off the bench. But I think having an experienced guy like Rosales driving the team bus is better than giving the reins to Fredy or OBW, who both would prefer be playing in their respective comfort zones.

4. Kasey Keller. He may be old, but he still has it. Although he did get a finger on the second SJ goal by Khari Stephenson and should've done better to deflect it out, he had some wicked saves. He has the reflexes of a ninja cat. I'd take a 60-year-old Keller over any other MLS keeper any day.

Overall, I'm pretty happy with that performance. It was a much better cohesive showing, and they showed that they can put it in the back of the net, despite the fact that Montero was missing. 2 points isn't ideal, but it's a good way to start building momentum. Once this team *clicks*, they will be pretty unstoppable.