At some point, we'll talk about the game and what this performance meant, but now is the time to focus on the injury and its aftermath. Sidereal has already talked about some of the major points, and what this injury will mean to Zakuani.

But we also need to discuss how the league handles Mullan's punishment and what that message sends. Mullan is not a monster. I know he was not trying to break Zakuani's leg. I'm sure he feels bad. But his comments after the match perfectly illustrate why an example must be made.

"I’m sorry for Steve (Zakuani)," Mullan said. "It was never my intention to injure him in the least. It’s a tackle that I’ve done hundreds of times and would probably do again. I had no intention of hurting him. It’s a freak, freak thing, and I apologize and wish Steve a speedy recovery."

Follow the jump for a still of the moment before impact.

Obviously, the emphasis in the quote is mine, but it should be obvious why that part is important. Mullan seems to think that his challenge was simply part of the game, and that's the problem. If you have the stomach, watch the replay (the one I've linked is actually reasonably tasteful), but really pay attention to the moment before impact. Look how close Mullan is when he is just starting his slide. He's about a foot away and doesn't appear to be making any kind of meaningful play on the ball. 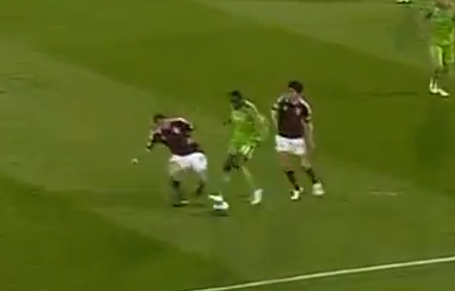 Looking at the play in its full context, it looks even worse. Even discounting his state of mind (which looks pretty negative as he complains about no foul being called on Tyson Wahl), he clearly lines up Zakuani and goes in extremely hard. This is not just another challenge, it's the exact kind of challenge the league should be doing away with.

If the league wants to send a message, an appropriate suspension would start at 10 games and probably include some kind of probationary period. Mullan, and just as importantly other players in the league, can't be allowed to believe this is just part of doing business.