Sounder at Heart Partners With TiqIQ To Provide Gameday Tickets

Share All sharing options for: Sounder at Heart Partners With TiqIQ To Provide Gameday Tickets

As you undoubtedly know, acquiring Seattle Sounders tickets can be a bit of a hassle if you are not a season-ticket holder. Most games are sold out at least weeks in advance and you are forced to go through the secondary market in order to acquire tickets. While Sounder at Heart's partnership with TiqIQ won't change any of that, it will make it a lot easier to find the best priced tickets in various sections by aggregating various ticket retailers' prices and connecting you with them.

As you may have noticed, there is a new tab along the top navigation bar called "tickets." By clicking on that tab, you'll be taken to the Sounder at Heart ticket center where you'll be able to find tickets for every Sounders game, both road and away (for some reason the away tickets aren't working right now, but I'm assured that will be fixed).

What TiqIQ essentially does is serve as an aggregator for other ticket retailers such as StubHub and eBay, showing you a range of ticket location and prices. There's even a color-coded system that tells you if a ticket is a good or bad deal. I would suggest playing around with a little, but you'll find that on the first screen you'll see a chart that shows you the historic prices of tickets for that game and whether they've been going up or down, as well as show you what TiqIQ thinks are the best deals. To dig a little deeper, just click on the game and you'll see a complete seating chart that displays are the available tickets, how many are available and how much they cost. 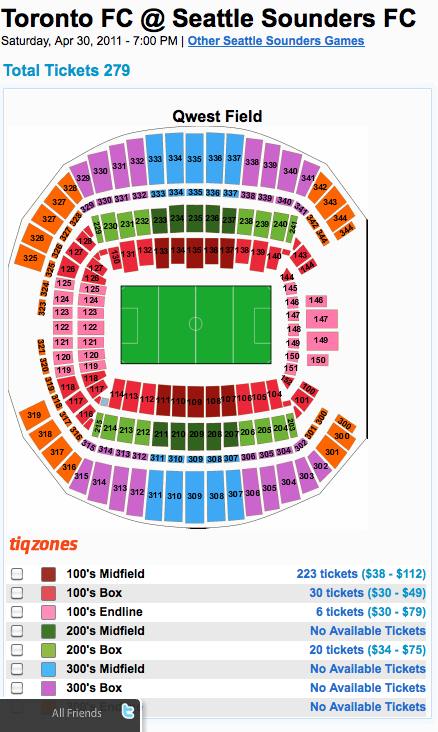 TiqIQ can also provide you a longer-term picture of how much tickets are going for (the image at the top of the story). We asked them to give us a chart of the average ticket price for the next five home matches following TFC, and discovered that the Portland Timbers game is almost 50 percent more expensive than the Vancouver Whitecaps match about a month later. You can also see that you can still find tickets as cheap as $20 for the Whitecaps game.

As part of this partnership, you'll probably also see occasional tweets on the Sounder at Heart Twitter account alerting you to particularly good deals. Hopefully, you won't find this too obtrusive and we would definitely like your feedback.

Our hope is that this partnership will be seen as adding value to the site, as working with a smart ticket company like this seems to be a natural direction for us. While we don't endorse ticket scalping, this at least provides you a realistic picture of what you can expect to pay for a given game and should provide you the ability to find the best priced tickets. SB Nation first began working with TiqIQ back in November and so far it has been well received.

As a side note, Sounder at Heart will be getting a relatively small percentage of every ticket that gets sold through our site. It's not necessarily a lot of money, but we are just poor bloggers and definitely appreciate the support.

Further down the line, TiqIQ may also be able to help us do stuff like having a Sounder at Heart Day at Qwest Field by getting us a special deal on a large chunk of tickets. We'll obviously get you more information as that becomes available.

By all means, if you have any questions let us know and we'll do our best to get you answers.