Unfortunately there is not as much insight to be gleaned from the highlights as you'd expect in a nearly 12-minute clip. The editors seemed much more intent on creating a package that showcased the announcers and their understandably homer-ish announcing than giving us an idea of how the match played out.

The one thing that did jump out was the quality of Nate Jaqua's chance in the 81st minute. I'm a big defender and fan of his, but that is a ball he absolutely has to finish. He got a freebie about 10 yards out and took way too long to take his shot. Granted, it still took a nice play from the defender to keep it from going in, but a quicker shot would have taken the defender out of the equation.

I'm really looking forward to watching this game again, particularly because I want to see if my initial observation on Erik Friberg vs. Alvaro Fernandez was correct. I thought Friberg looked like he was sick, even before he was pulled. I thought Fernandez had some great moments and looked like an improvement. I'm not sure what, exactly, changed in the second half but I don't think it had anything to do with that switch.

More likely, I think it was Mauro Rosales running out of gas - he seemed to disappear after a stellar first half - and the Earthquakes simply doing a better job of controlling the midfield. Based on memory, it doesn't seem like any Sounders played as well in the second half as they did in the first. 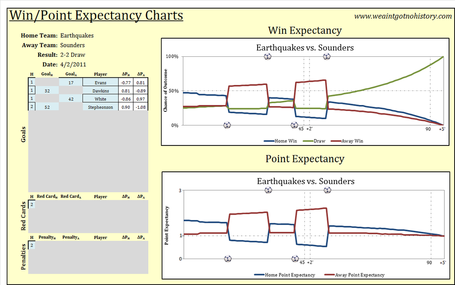 On the Match: We felt a little unlucky tonight that we didn't get the win, but to come back into the game being a goal down twice is very good in any match. I'm very happy with tonight’s match, with the outcome and with the performance by our players. For the most part, I feel we dominated play against a good team. About Coming From Behind: What I liked about our play tonight was that we didn't give up. We dominated play in the second half, we got the goal and I felt that we were unlucky that we didn't get the third one to win it.

Thoughts on Match: "I thought we played a good game. We created a lot of chances and fought back. Khari (Stevenson) had a good goal in the second half, (Simon) Dawkins’ goal in the first half helped us get momentum and we completed the comeback." On team’s play through Three games: "I think we are playing a lot better. Last year we were more defensive and relied on the counter (attack). This year we possess the ball more, creating more chances; last year we only created a few. As long as we continue to play with confidence and keep the ball, we will create the chances and score."

On first career MLS goal: "I had a chance before; I wish I would have taken it earlier. I said to myself the next time I get an opportunity, I will hit first time. I got the opportunity, I hit it, and it went in. I am very happy."

On Importance of Home Play: "We haven’t had a good home record for a while now, it was important to play a good team at home and come away with a draw. Starting the season of at home with two losses isn’t a good sign. It was good for us to finally get back into the game and tie it up the way we did." On First Goal of the Season: "I picked up the ball, I’m not sure if it came from Bobby (Convey) or Sam (Cronin). I tried to play the ball to Wondo, made a bad pass and the ball ended up on my feet. I looked up, I had time and space. I had the shot and I took it, and it went in."

Thoughts on Final Result: "We had some turnovers and that always puts you in trouble. We had some chances and they had some chances. It probably could have ended 4-4 and nobody could have complained. But two goals should be enough to win when you’re on the road." On San Jose: "This is always a tough place to play. The field plays a bit smaller than it is. But San Jose is a good team and they really battled out there tonight."

On Team’s Play: "In the first half I did well running at them on the left side, but in the second we were unable to connect with the wings and I had to go inside to look for the ball. Credit San Jose because they kept the ball really well." On Opposition: "They’re a quick defensive team. But they like to attack and leave themselves open defensively a bit. With all the chances we created we should make you pay for it. The game was there to be had."

On Trying to Shut Down Chris Wondolowski: "He had a couple of good chances. On the first, if he’d put that a little lower I would’ve had no chance to save it, but sometimes you find yourself in the right place to make the save. I think we focused so much on him that we let a couple guys run through the middle. On the Earthquakes: "They have a good team here, there’s a fun atmosphere, it’s a great pitch to play on and I’m just looking forward to seeing the new stadium."