Stats: Dropping Shots on Goal Out of the Picture

Share All sharing options for: Stats: Dropping Shots on Goal Out of the Picture

Last week I took a look at correlations between first half and second half rates of various statistics for MLS players to help explore the question of whether the rates were primarily driven by player skill or other factors. The upshot was that shot rate is pretty well correlated, but both accuracy (shots on goal / shots) and conversion (goals / shots on goal) were all over the place, indicating that factors other than player skill (which we'll call 'randomness') dominate those rates.

A number of questions follow from that initial look relating to total team rates, defensive (particularly goalkeeper) rates, and so on. But one I want to look at today is the possibility that using the Shots on Goal statistic as a component in both of the accuracy and conversion rates is accounting for some of the randomness.

First, goals come from shots on goal (mostly. Own goals can be an exception but are relatively rare). So it would seem to be true that Shots on Goal should correlate in some way with quality. But if you keep in mind the handy rule-of-thumb ratios that about 1 in 10 shots becomes a goal and about 4 in 10 shots are on goal, it becomes obvious that a majority of shots on goal (about 75%) are misses. And the implication of our previous analysis was that those misses are superior to misses that are not on goal and therefore correlate in some way to quality. But is that true? A hard shot from 20 yards out that rings off the bar is technically not on goal, but is more goal-dangerous (and indicative of offensive quality) than a slow roller to the keeper that is easily saved but is technically on goal. By more goal-dangerous, I mean that if you gave the same player repeated chances at the same shot, it would result in more goals on average, even though a higher percentage of them would be off target. So maybe introducing Shots on Goal into each of our ratios has simply corrupted any measurement of quality out of them.

Fortunately, there's an easy remedy for that. I can take a look at the Goals / Shots ratio and leave Shots on Goal out of it. Chris Anderson refers to this as the Reep Ratio after pioneering soccer analyst Charles Reep. Others refer to it as Conversion Rate, which we're already using. I'll call it the Strike Rate to add to and/or reduce confusion.

So I'm going to look at the Strike Rate for last season's MLS players who had at least 10 shots per half (to weed out sample size problems) and then correlate the values from one half to the next. Since player skill should hypothetically be fairly consistent over the course of a single season, then a high correlation is an argument that Strike Rate is governed by skill rather than more random factors. What do we get? 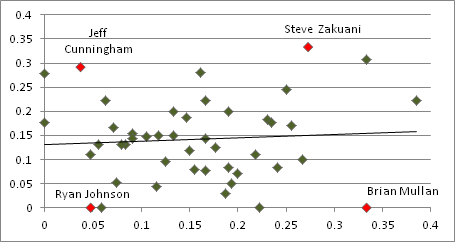 Yeah, it's still all over the place. The Pearson Correlation is 0.07, which isn't any better than the ratios that involve Shots on Goal. This bolsters our argument that players are largely distinguished by their ability to get shots off rather than any distinct ability to create more successful shots.

I also want to call out a couple of outliers on those results. Jeff Cunningham and Brian Mullan are extreme examples of players having their Strike Rates change dramatically from half to half. Cunningham had a first half Strike Rate of 3.7%. He scored four goals in the first half, but three were on penalties, so he had only one goal in the run of play out of 26 shots. But his second half rate was 29.2%, when he went on a tear along with the rest of the FC Dallas team. In contrast Mullan started off with a 33% strike rate but failed to score a goal in the second half of the season.

Of course, the notable name is Steve Zakuani. He had a very impressive first half strike rate of 27% and an even more impressive second half strike rate of 33%. That may be heartening to Sounders fans and fans of Zakuani, but remember that the theory we're developing here are that those ratios are largely out of the player's control. And since those ratios are off the charts compared to league average, I think it's likely we'll see them regress and unless Zakuani gets significantly more shots off than he did last season, he won't match last season's goal total of 10. If he maintains those ratios, it's an argument that he's so far off the charts quality-wise compared to other players in MLS that he defies this analysis. An important data point is that his Strike Rate so far this season is 14%, which is right around the league average.

At the other end we have Ryan Johnson, who last year was either uncommonly terrible or just unlucky. I'm going on the theory that he was unlucky and that he should see a significant increase in his Strike Rate (and public perception) this season if he's given the opportunity, which should keep San Jose from relying almost exclusively on Chris Wondolowski for goals.

I'll continue posting updates as the season goes on and next week I'll take a look at team totals to see if they behave the same as individual player values.